Another week, another report on a suspicious ticker. This time we present to you Inpixon (INPX). Its share price has increased by more than ten-fold over the last three weeks, volume at all-time record levels by a significant margin and daily RSI (14) exceeds 90. INPX also raises some eyebrows when a look is taken at its share issuance practices, its lenders and the underwriter of one its latest public offerings. INPX short report.

Inpixon is “a technology company that helps to secure, digitize and optimize any premises with Indoor Positioning Analytics, sometimes referred to in this annual report as “IPA,” for businesses and governments in the connected world. Inpixon Indoor Positioning Analytics is based on new sensor technology that finds all accessible cellular, Wi-Fi, Bluetooth and RFID signals anonymously. Paired with a high-performance, data analytics platform, this technology delivers visibility, security and business intelligence on any commercial or government premises worldwide”. It used to be known as Sysorex Inc. until early 2017 and used to describe itself as “a global technology provider specializing in big data analytics and location-based mobile solutions for the private and public sectors”. Before 2011 it used to be known as SoftLEAD Technology Partners Inc. a “leader in next-generation web applications which are extending to mobile users and the corporate infrastructure security solutions”.

Looking at INPX’s financials is painful. Over Q2 and Q3 cash dwindled, total liabilities grew by more than 50% and net losses outstripped cash by a significant margin. It should thus come as no surprise that the number outstanding shares has grown by nearly three fold. These levels of dilution are a chronic issue for IPNX. Between December 31 2018 and December 26 2019, the number of outstanding shares increased from 1,581,880 to 187,768,601. This is even more troubling when one bears in mind that on November 2018 a 1-for-40 reverse split was made effective, a likely indication that dilution is the company’s modus operandi as opposed to a last resort (1).

It is pretty obvious that shareholder value is not on the cards for INPX’s management. The company appears to print shares for everything, probably even for the purchase of toilet paper (might as well use printed share certificates for those purposes). In order to keep in the spirit of our previous reports we shall be focusing on the most dubious ones… cause we love red flags more than life itself.

IPNX and Iliad Research entered into a note purchase agreement for $2,520,000 on October 12,2018. As a result of IPNX’s complete and utter inability to generate significant revenues it had no choice but to turn this debt (plus interests) into 4,177,379 shares of common stock at exchange prices between $0.51 and $0.8989 per share (2). Not atrocious one might argue. However, this is not the end of the story as far as note purchase agreements and Iliad Research are concerned. On December 21, 2018 another note purchase agreement was put in place, this time for $1,895,000. Once again IPNX started printing shares like there is there is no tomorrow to service this debt, see below for the break down. 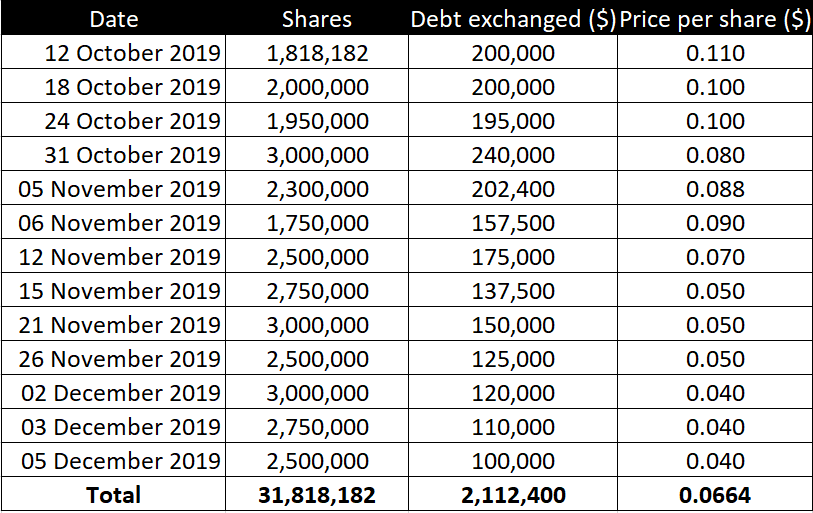 However, Iliad is not the only institution that is happy to lend to INPX. Enter Chicago Venture Partners, an affiliate of Iliad. On May 3, 2018 INPX and Chicago Venture Partners entered into a note purchase agreement for $3,770,000. Once again INPX has not been able to service this debt and has issued shares in exchange, see below for the breakdown so far.

The company has issued a total of 33,350,000 shares to pay Chicago Venture Partners $2,076,000 ($0.062 price per share). Consequently, along with its affiliate, Iliad, they currently hold over 65 million shares which accounts for more than a third of all shares issued by INPX during 2019.

In addition, St. George Investments LLC, another affiliate, holds yet another promissory note of the Company with an outstanding balance of approximately $957,500 as of December 11, 2019 (3). The company’s debt problems are only escalating. Consequently, we believe that these debts will carry on being paid with more share issuance, exacerbating the serious dilution issues currently present.

It must be pointed out that Iliad Research and Trading has held similar dilutive agreements with other distressed companies. According to our Asgard database (a proprietary database and stock selection tool), Iliad has been involved with other suspect tickers, such as: CV Sciences (CVSI), Netlist (NLST) and NovaBay Pharma (NBY)  These tickers have experienced long term decreases in their share price characterised by high levels of volatility. It could thus be argued that Iliad and co. are a “spiral of death” creditor.

It must be clear that all of the shares that have been issued to Iliad and its affiliates by INPX are unregistered. As a result, the SEC must be notified if these shares are to be sold and/or a specified period of time must elapse as stipulated by Rule 144 (usually six months to a year). If Iliad and co are playing by the book then they can only sell these securities several months later when the share has already decreased considerably (INPX’s share price has decreased from $3.00 to $0.11 during 2019), meaning that Iliad and co are hell bent of going bankrupt or hoping for an unlikely increase in INPX’s share price given its dilution levels (which has occurred with CVSI, NLST and NBY… and in all these three cases the increase was only temporary).

An important side note on Iliad and its affiliates is that then man at the helm is John M. Fife, an individual whose SEC track record is not clean. Back in January 2007, Mr. Fife was found guilty of engaging in fraudulent scheme to purchase variable annuity contracts issued by the Lincoln National Life Insurance Company  for Clarion Capital, LP  in order to engage in market timing for the benefit of Clarion Capital, a now-dissolved Chicago hedge fund formed by Fife for the exclusive purpose of engaging in market timing in international mutual funds available through variable annuities (4). This was a long time ago and it is possible Mr. Fife has turned a new leaf as far as SEC violations are concerned… but bears such as ourselves find this difficult to believe as we are very sceptical/cynical by nature. We must emphasise that this is only our opinion.

INPX also has agreements in place with other dubious entities. One of these is Ladenburg Thalmann & Co. Inc.. Landenburg is currently acting as the underwriter of the company’s latest public offering, first announced on August 2019 (5). Ladenburg has one particularly dubious link which relates to one of its shareholders, Phillip Frost. Mr. Frost is an infamous and disgraced figure in the world of publicly traded companies.  He participated in a “long running schemes that generated over $27 million from unlawful stock sales and caused significant harm to retail investors who were left holding virtually worthless stock”. Consequently, he is facing serious securities violation charges by the SEC. (6) .

Although, Mr. Frost was forced to sell the majority of his shares in Ladenburg  back to the company and resign as non-executive chairman he remains a shareholder (7). 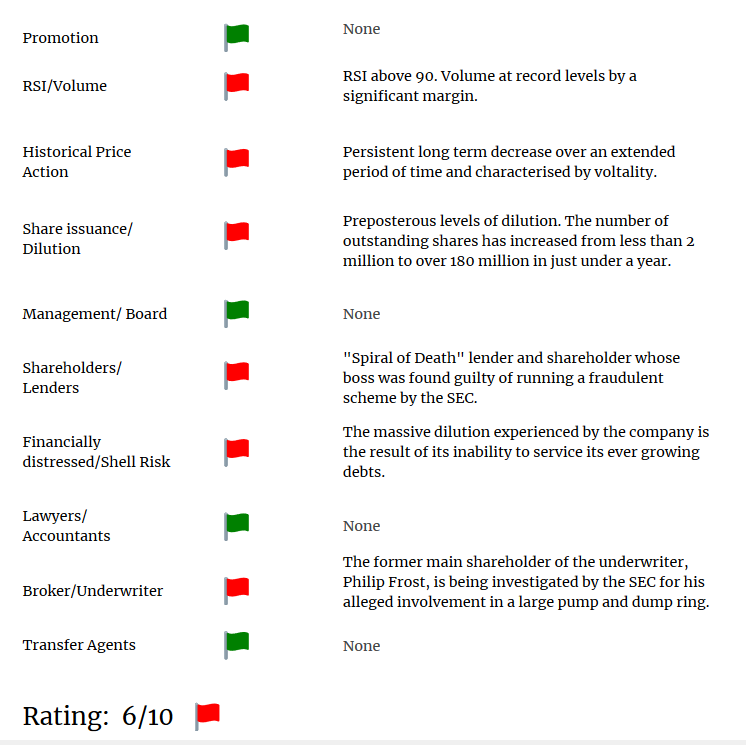 INPX is an awful investment. The combination of terrible financials, extreme dilution that has been largely the result of dealings with what appears to be a dubious lender and a questionable underwriter, should make most reasonable folk feel quite apprehensive. Stay away from this company’s shares unless you are trader with experience in dealing with this type of tickers.