Like most of the tickers featured in our short reports FCEL has exhibited a combination of a drastic price increase (a near ten-fold price increase over the last 2 months), trading volume substantially above the 30-day daily average (151.5 million vs 25.7 million) and high RSI (92). One might argue that this is not a particularly strange occurrence in the world of small caps but upon further inspection we have found enough red flags to bring them to the public’s attention. FCEL exhibits a combination of extreme dilution over the last 5 months, unsustainable levels of debt (part of which comes from a “spiral of death” creditor) and a shareholder that has been in trouble with the SEC because of its alleged involvement with a pump and dump ring.

FuelCell Energy Inc. is “a fuel cell power company. It designs, manufactures, operates and services Direct Fuel Cell power plants (a type of molten carbonate fuel cell), to electrochemically produce electricity and heat from a range of basic fuels including natural gas and biogas”. It was founded in 1969 as Energy Research Corporation and completed its IPO in 1992. The company primarily operates in the United States, South Korea, England, Germany, Canada, and Spain.

To say that FCEL is struggling financially would be a massive understatement. The balance sheet and consolidated financial statements on its latest 10Q (for the period ended July 31) read like a horror story. Liabilities stood at a whopping $217 million, net loss for the quarter amounted to $5.3 million (of which $3.6 million were accrued as a result of interest expenses) and cash and cash equivalents were a mere $16 million. Below is a break down of FCEL’s debt and financing obligation, as you can see it is going from bad to worse as they have had to borrow from new lenders in order to service existing debts: 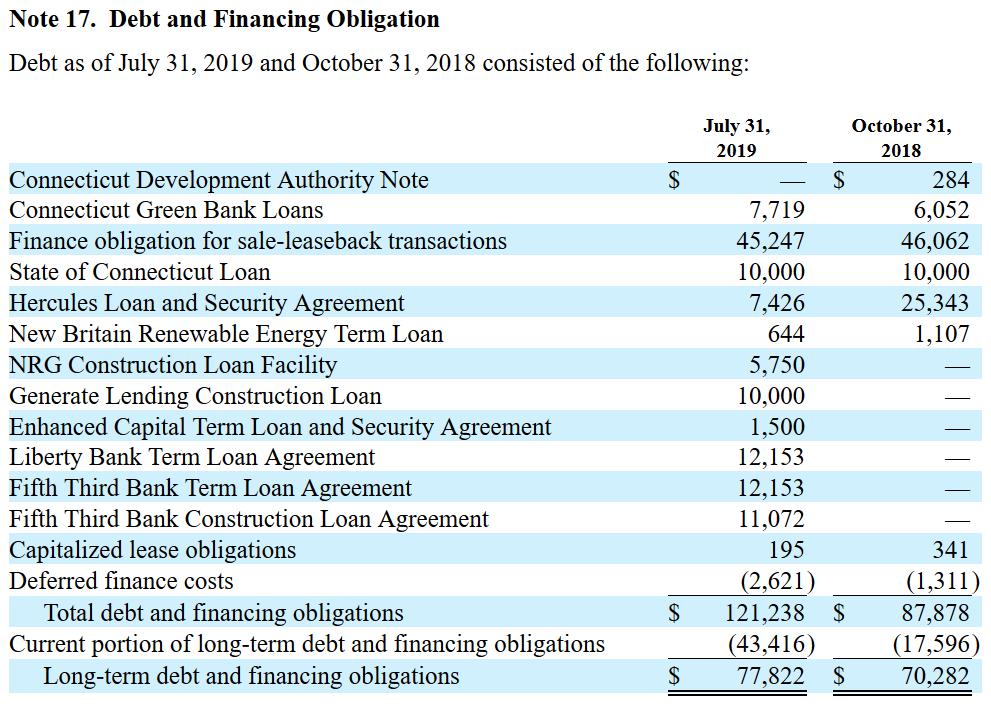 FCEL’s level of indebtedness seems unsustainable. So how on earth has it managed to continue its operations over recent months? The answer is a simple and unsurprising one: debt renegotiation along with more borrowing and extreme levels of share issuance/dilution. Between July 31 and October 22, the number of outstanding shares increased from around 118 million to more than 193 million.

It also appears that the company will continue relying on share issuance as means of servicing its debt and operations in order to stay afloat. An 8K filed on December 11 2019 states that FCEL intends on holding a Special Meeting in order to consider: “(i) a proposal to increase the number of authorized shares of common stock of the Company from 225,000,000 shares to 450,000,000 shares, (ii) a proposal to authorize the Board to effect a reverse stock split through an amendment to the Company’s Certificate of Incorporation, as amended, and (iii) a proposal to adjourn the Special Meeting, if necessary, to solicit additional proxies”. (1)

Consequently, Hercules Capital syphoned around a third of all the capital FCEL has raised through its ATM over the last few months. Below is the breakdown:

– From 8K dated August 8 2019 (3): “During the period beginning on July 25, 2019 and ending on (and including) August 8, 2019, the Company raised aggregate gross proceeds, before deducting commissions and any offering-related expenses, of approximately $6.4 million under its previously announced “at-the-market” equity program. The Company issued and sold a total of approximately 18.2 million shares during this period at an average sale price of $0.35 per share… approximately $1.9 million have been used to pay down the outstanding balance of the Company’s senior secured credit facility with Hercules Capital, Inc

-From 8K dated September 12 2019 (4):  During the period beginning on September 10, 2019 and ending on (and including) September 12, 2019, the Company issued and sold, under its previously announced “at-the-market” equity program, a total of approximately 34.4 million shares of its common stock at an average sale price of $0.42 per share and raised aggregate gross proceeds of approximately $14.6 million… approximately $2.1 million have been used to pay down the outstanding balance of the Company’s senior secured credit facility with Hercules Capital, Inc

-From 8K dated September 27 2019 (5): During the period beginning on September 13, 2019 and ending on (and including) September 27, 2019, the Company issued and sold, under its previously announced “at-the-market” equity program, a total of approximately 23.1 million shares of its common stock at an average sale price of $0.36 per share and raised aggregate gross proceeds of approximately $8.3 million… approximately $2.3 million have been used to pay the outstanding balance of the Company’s senior secured credit facility with Hercules in full, and, as discussed above, all indebtedness under the Hercules facility has been paid off.

It thus appears that the exorbitant increase in FCEL’s number of outstanding shares is largely the result of the terms set out on the last amendment of its loan and security agreement with Hercules Capital. In our opinion these terms qualify as predatory. After all this is not the only distressed company with whom Hercules has been involved recently. According to our Asgard database (a proprietary database and stock selection tool)), Hercules has been involved with other suspect tickers:

-Zosano Pharma (ZSAN). On June 25 2015, ZSAN entered a $15 million loan and security agreement with Hercules (6). ZSAN’s share price at the time was $150. It then went on to experience a very volatile decline and currently stands below $2.

-Genocea Biosciences (GNCA). On November 21 2014, GNCA entered into a term loan facility of up to $27 million with Hercules (7). GNCA’s share price stood around $70. Then it went on a very volatile journey during the following years and now stands under $3.

-Axovant Gene Therapies (AXGT). On February 2 2017, AXGT entered a $55 million loan and security agreement with Hercules. (8) . AXGT’s share price at the time stood around $100. It went on breach the $200 mark on the same year but it currently stands below $6.

There are a few other examples but we won’t bore you as their story is eerily similar to the examples shown above. It is thus safe to say that Hercules Capital could be called a “Spiral of Death” creditor. Another curious fact about Hercules Capital is that its founder and former CEO, Manuel Henriquez, plead guilty to charges brought upon him as a result of his involvement in the US college admissions scandal. He paid a $400,000 bribe to get his oldest daughter to gain acceptance to Georgetown University (9). It thus appears that Hercules’ former central figure is willing to not “play by the book”.

Despite FCEL having paid all of its debts to Hercules though the sale of shares registered under the ATM offering it has currently in place, the well is yet to run dry as FCEL still has 7,939,382 shares available for potential future sales. And judging by its finances it would make sense for these shares to be sold at current prices (10).

A shareholder tangled up in some dodgy dealings:

As some of our readers might be aware, we love to dig up dirt on the tickers we discuss and FCEL has certainly satisfied this craving. We present to you Hudson Bay Capital Management. Hudson Bay Capital is a name that pops up often in our research so we were not surprised to find a Schedule 13G filing stating that it holds over 5 million FCEL shares. Not only has Hudson Bay Capital been involved with other dubious tickers such as RKDA, BLIN, RIOT, SNES, TRNX and DMPI (among a few others), but it has also been named in the SEC’s stock manipulation case against small cap investor Barry C. Honig for allegedly being part of the Team Honig pump and dump ring. In a lawsuit filed in Superior Court of California this week, MabVax Therapeutics Holdings details how New York-based Hudson Bay Capital played a pivotal role in inducing the company to go public via a reverse merger so that Barry Honig and his crew could take control of the board and manipulate the stock. For more details please check Teri Buhl’s excellent article on the matter (11). This not the first time Hudson Bay has been in trouble with the SEC as it was previously found violating regulation M (12). Needless to say, Hudson Bay Capital, like Hercules Capital, are entities that appear to not have many concerns about bending the rules to their advantage. 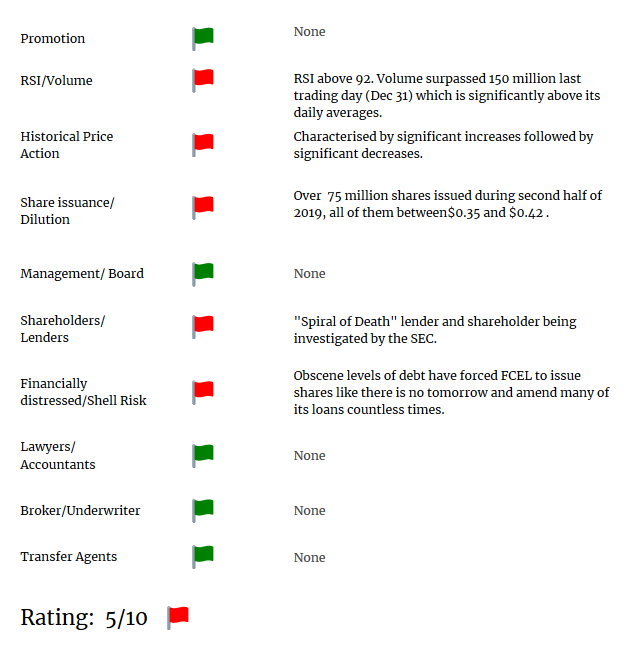 FCEL is certainly not a good investment. It is basically a company that is financially distressed and has been taken advantage of by what appears to be an unscrupulous creditor, resulting in obscene levels of dilution and the involvement of a shareholder that has a poor track record as far as securities laws violations go. Stay away unless you have extensive experience trading this type of tickers.