Another investor warning another prolific third party… prolific for all the wrong reasons. We believe it is important to highlight such entities in order to ensure the trading and investing community can make the best possible decisions when it comes to choosing their portfolio. This time around we present to you Iliad Research and Trading L.P. If you are a small/micro/nano traders and take the time to look into financial filings (which you should be doing!!!) you will have likely come across this name. We must emphasise that this article is no way accusing Iliad Research and Trading of breaking any laws, regulations, duties or contractual obligations, we are simply highlighting how this entity finds itself repeatedly involved with publicly traded companies that exhibit highly dubious yet somewhat predictable share price behaviour. We must also point out that we believe that Iliad Research and Trading along with other associated entities are arguably among the most prolific so-called “toxic lenders” currently operating in the world of penny stocks and consider its name showing up on any company filing a big red flag.

Despite our best efforts we have been unable to find Iliad’s website. However, the same cannot be said about its manager, John. M. Fife, who happens to have his very own webpage (1). Mr. Fife is a Harvard Business School graduate with extensive experience in “venture capital, private equity, and mergers and acquisitions”. His flagship entity is Chicago Venture Partners (CVP), which he founded in 1998 and today is a “leading provider of capital to small capitalization public companies listed on the NASDAQ and OTC Market. Through its affiliate entities, CVP holds investments of debt, equity or preferred stock in more than 100 publicly traded companies, ranging in investment size from $50,000 to over $5,000,000. Sector focus includes technology, medical devices, life sciences, and national resources”.  We find it somewhat strange that Iliad Research and Trading is not mentioned by name on Mr. Fife’s website when one considers that according to fintel.io, Chicago Venture Partners portfolio value currently stands below $25 million (2) while Iliad’s portfolio value exceeds $100 million (3).

It is also worth pointing out that Mr. Fife’s track record is not squeaky clean. In January 2007, Mr. Fife was named as a defendant in a SEC complaint which claimed that he along with Clarion Management had engaged in “a fraudulent scheme to , purchase variable annuity contracts issued by the Lincoln National Life Insurance Company (“Lincoln”) in order to engage in “market timing” in mutual funds for the benefit of Clarion Capital, LP (“Clarion Capital”). Clarion Capital was a Chicago-based hedge fund formed by Fife for the express purpose of engaging in market timing through the purchase of variable annuity contracts. Fife controlled Clarion Capital and carried out the scheme through Clarion Management, the hedge fund’s general partner and unregistered investment adviser”. (4) . The final judgement “permanently restrained and enjoined the defendants from future violations of the Section 10(b) of the Securities Act of 1934 and Rule 10b-5 thereunder; required the Defendants, jointly and severally, to pay disgorgement in the amount of $234,399, plus prejudgment interest of $60,584; and additionally ordered Fife to pay a civil penalty of $234,399.” The defendants “consented to the entry of this Final Judgment, without admitting or denying the allegations in the Commission’s complaint. As part of the settlement of this case, defendant Fife also consented to the entry of a Commission Order barring him from associating with any investment adviser, with a right to reapply after 18 months.” (5).

We will not be focusing on Chicago Venture Partners, as previously stated we will instead be focusing on Iliad Research and Trading and the publicly listed companies that have entered security purchase agreements, note purchase agreements, promissory notes and similar forms of financing as these tend to be more common among distressed companies. Firstly, we will take a more detailed look at two of these companies that have recently exhibited suspect price action in order to illustrate the nature and timing of these agreements. Later on, we will give an overview of the rates of return generated by 28 different companies since they entered into SPAs or debt agreements with Iliad. Please note that we will be comparing historical share prices to those of March 4, 2020, as this date precedes the “Great Corona Crash”. 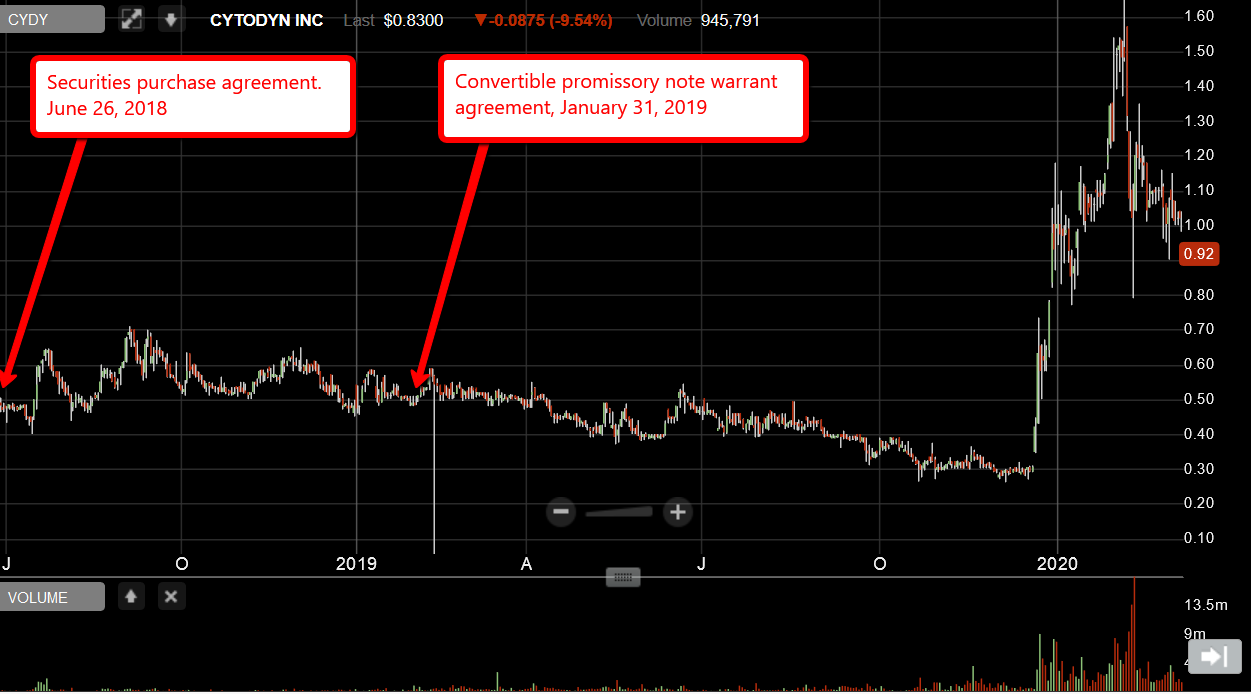 CYDY is a company that we covered on February 6, 2020. At the time of our report it was trading above $1.30 by March 4, 2020 its price stood a couple of cents above $1.30. As the graph above shows CYDY recent price action has been rather uncharacteristic as it was consistently trading below $0.35 before mid-December 2019. It was trading around $0.50 when it entered a securities purchase agreement for $5.7 million and a convertible promissory note warrant agreement for $5.7 million, on June 26, 2018 (6) and on January 31, 2019 (7) respectively.

Our report goes into greater detail and shows how there were over 170 million warrants with an average weighted price of $0.71 as of November 30, 2019 as well as lawsuits, issues with the Chief medical officer and other red flags. 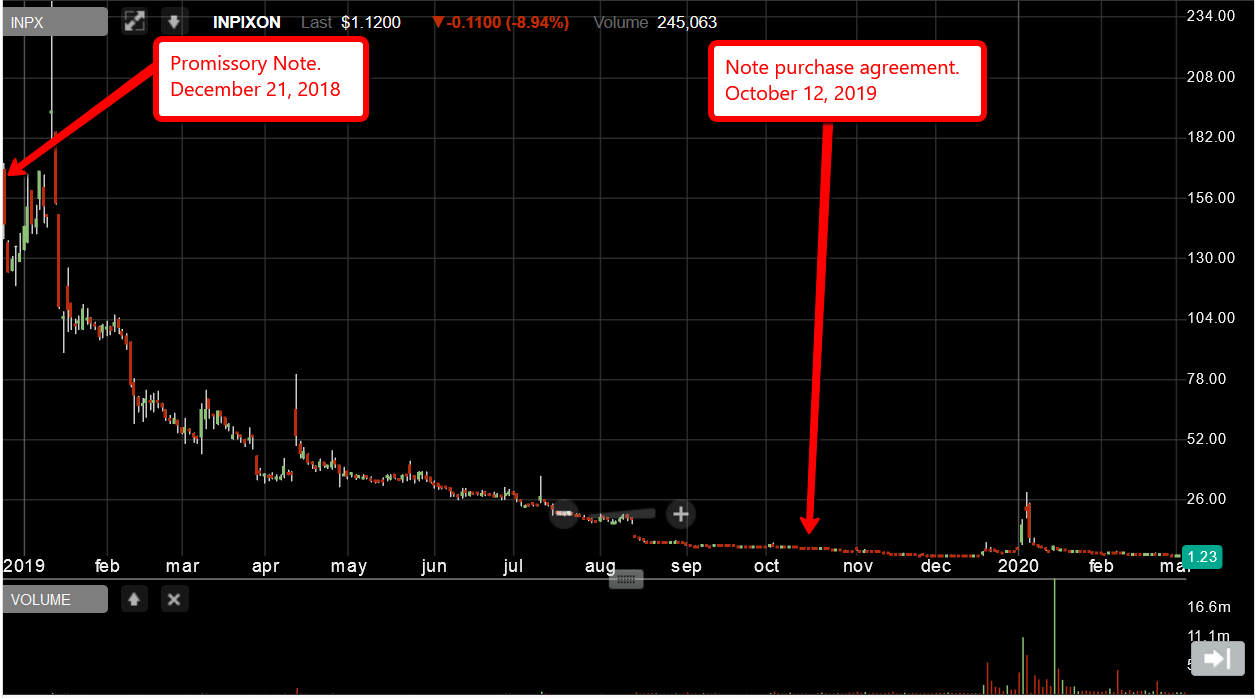 We covered INPX on January 6, 2020. Besides being involved with an underwriter with links to an important figure in an alleged pump and dump ring, INPX entered into a note purchase agreement with Iliad that led to ludicrous levels of dilution (8). Iliad already held an INPX promissory note that had been issued on December 21, 2018 (9). Between October 12, 2019 and December 5, 2019, INPX exchanged $4,842,400 worth of debt for 35,995,561 shares at a weighted average price per share of $0.135 (note that the shares and price per share stated on the previous sentence do not take into account INPX’s latest reverse split). On January 2, 2020, INPX went on a parabolic run that resulted in a five-fold price increase by January 3, 2020. The next trading day, January 6, 2020, a 1-to-45 reverse split was announced and its share price proceeded to collapse just as quickly as it rose (10).

As the graph above shows INPX’s shares are currently trading below the price they were when the note purchase agreement was signed. It is also worth pointing out that both Chicago Venture Partners and St. Georges Investment, both entities managed by Mr. Fife, had concurrent note purchase agreements in place with INPX.

One could argue that we are cherry picking the worst tickers in order to show Iliad Research and Trading in the worst possible light. This is not the case. We went through the hassle of calculating the annualised rate of return between the date of the first SPA or debt agreement and March 4, 2020 (as this precedes the “Great Corona Crash”) of 28 publicly traded companies Iliad has been involved over the last four years approximately. We give you the “Iliad Research and Trading L.P Index”, behold its “greatness”!!!!!: 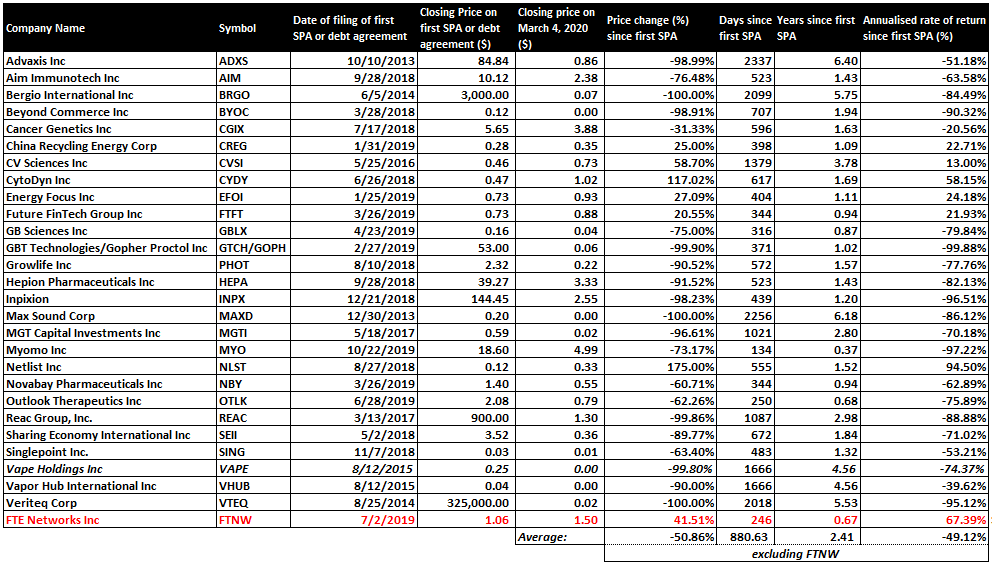 Oh boy… the above table is hard to look at. If FTN Networks Inc. is excluded (which it should be considering that it appears to have been delisted as it is no longer trading) (11), the average annualised rate of return for these companies’ shares is a disastrous -49%. It can be clearly appreciated that companies that get involved with Iliad Research and Trading rarely go on to perform well as far as share price is concerned. It is also worth pointing out that the share price history of many of these companies are often punctuated by spikes in price, volume and volatility that are promptly followed by price decreases of similar magnitude.

Iliad has been doing this for years because it is likely completely legal and thus common practice among small/micro/nano caps financiers. Lincoln Park is one of many vulture funds that operate in this way.

We thus advise investors to diligently read filings and be careful when dealing with any company that has a SPA or debt agreement in place, especially if Iliad Research and Trading is involved. Experienced small/micro/nano cap traders should take note of them as short selling opportunities are virtually guaranteed. And beginner investors should avoid them or treat them with extreme caution.

We also welcome our readers who have invested in or traded the above listed companies to please come forward and share their experiences. This will prove very valuable as a warning to current and prospective investors/traders about the perils of getting involved with companies that have entered into any sort of agreement with Iliad Research and Trading.