Like all other tickers featured in our short reports, BTCY’s price action has exhibited unusual behaviour recently. Over the last two months it has increased by nearly six-fold. Furthermore, its trading volume has been considerably above the 6-month daily average and RSI (14) has breached 80 on more than one occasion. It didn’t take much digging around to unearth a couple of other red flags, namely: recurrent paid promotion, dilution issues, growing liabilities and a security purchase agreement with one of the most dubious institutions in OTC markets.

Biotricity describes itself as a “leading-edge medical technology company focused on solutions that enable biometric data monitoring”. The company was first incorporated in August 2012 in the state of Nevada under the name Metasolutions, Inc and changed its name to the current one in January 2016. Their lead product is described as a “Bioflux MCT technology” comprised of “a monitoring device and software component”. It was first commercialised in April 2018. The company also claims that it is currently experiencing “double digit growth through new sales and an above 80% re-order rate”. But as we will see, a quick glance at BTCY’s financials paints a far less rosy picture.

BTCY’s financials are not the worst we have seen but they are still pretty bad. Net revenue has increased significantly over the last 18 months. However, this has not been enough to stop debt from drastically increasing over the last couple of years. Between June 30, 2018 and September 30, 2019 total liabilities increased from little over $1 million to a more than $5.7 million.

Furthermore, the number of outstanding shares increased from 26 million to nearly 32 million over the same time period. But perhaps the most concerning fact for prospective investors is that BCTY has received a whopping $7.4 million dollars from financing activities (such as warrants, share issuance and promissory notes) over the same time period. This is a very bad omen, especially when one bares in mind that one of the company’s main creditors is one of the most dubious institutions currently operating in OTC markets.

We present to you once again, Lincoln Park Capital. As previously mentioned, it is one of the most suspicious creditors currently operating in OTC markets. We last mentioned them in our ONCY investor warning from Dec 31, 2019. These two parties entered into a $26 million security purchase agreement on September 2018. ONCY’s share price went to decrease from a $6 high on December 31 (when we published our investor warning) to below $3 on January 28, 2019).

Although Lincoln Park has not had any legal issues that we are aware of, the list of other companies with whom they have had security purchase agreements should give any investor good reason for concern. One of them is Anavex life Sciences with which it inked one of such agreements for the sale of up to $50 million worth of common stock on October 2015 (1). Anavex’s share price then proceeded to increase from around $8 to over $14 in November, only for it to come crashing down to less than $4 a few days later. Anavex was later subject a complaint for violation of federal securities laws (2).

Another one of these companies is Biocept, Inc. with whom Lincoln Park entered into a securities purchase agreement on September 2018 resulting in Lincoln Park having nearly 400,000 Biocept shares which were registered for sale on October 2019(3). Biocept’s share price then proceeded to decline from $2.20 to under $0.80 on December 2018 only to then violently spike to more than $3.60 on January 2018 and crash again to less than $1.20 on February 2019.

Zosano Pharma Corp is yet another company that entered a securities purchase agreement with Lincoln Park. This agreement dates back to October 2017 and amounted $35 million (4). Zosano’s share price at the time was around $16, it currently trades at less than $1.50, seeing several spikes and crashes along the way. Other examples of dubious companies that have been involved with Lincoln Park includes Tonix Pharma, BioLargo Inc and Genocea Biosciences among others.

Thus, prospective investors should be very concerned by the fact that on June 28, 2018, BTCY and Lincoln Park Capital entered a securities purchase agreement for $25 million dollars (5)

This is perhaps the biggest flag BTCY raises. Over the last couple months, several press releases have been put out with the help of Emerging Markets Consulting LLC (EMC). EMC is a paid promoter (pumper), something which is clearly stated on their website’s disclaimer (6).

Its most recent BTCY promotion is from February 10, 2020 (7) and clearly states that EMC is contracted to receive up to $30,000 for its promotional services and that it may trade BTCY shares.

We believe this paid promotion is the main reason for BTCY’s recent price run as EMC pump coverage began on December 23, 2019, a couple days after BTCY’s share price started to increase.

Furthermore, this is not the first time that BTCY pays for promotion. On January 11, 2018 BTCY gave One Equity Stocks between 80,000 to 140,000 shares in exchange for its promotional services (8).

And in 2016/2017, BTCY paid Stock Watch Index LLC for the production of a promotional report. Although the sum is not specified the disclaimer makes it perfectly clear that they were compensated with stock warrants(9). 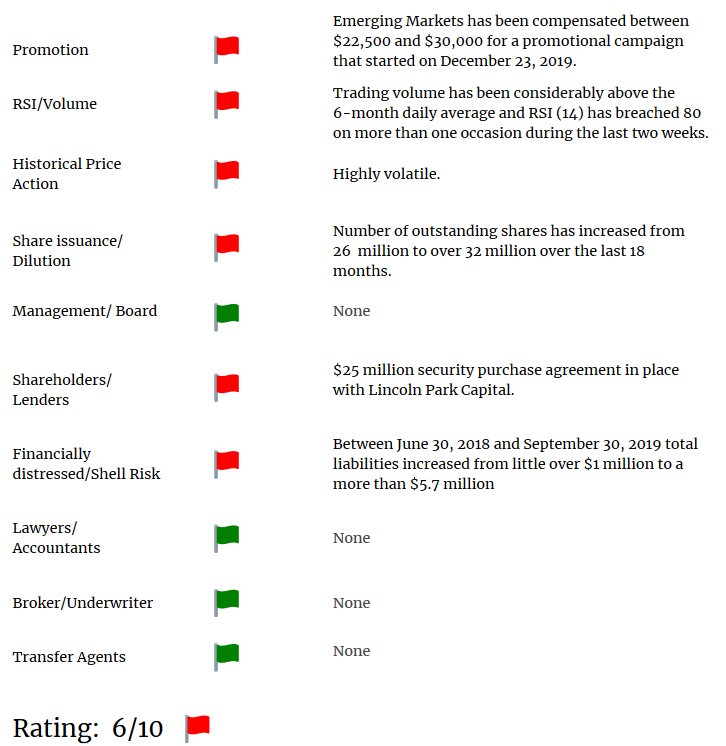 Paid promotion that coincides with an extended price run is a massive red flag. Add to this terrible financials and a securities purchase agreement with one of the most dubious institutions in OTC markets and you have got a terrible investment. Stay away from BTCY shares unless you have experience trading tickers such as this one.