“Bad companies oftentimes start with bad …. boys”. Not sure who to attribute this quote to (or whether the quote is correct), but this is something that should become clear to most short sellers if they have managed to stay in the game for long enough. It is a strong running theme in our research as many of the tickers we discuss are oftentimes involved with the same third parties time and again. One of them keeps popping up, so we considered it worthwhile to bring it to the trading/investing community’s attention. Some of you are likely well acquainted with it. It goes by the name of Lincoln Park Capital. We must emphasise that this article is no way accusing Lincoln Park Capital of breaking any laws, regulations, duties or contractual obligations, we are simply highlighting how this fund finds itself repeatedly involved with publicly traded companies that exhibit highly dubious yet somewhat predictable share price behaviour. We must also point out that we believe that Lincoln Park Capital is arguably one of the most prolific vulture funds in the realm of small/micro/nano caps and consider its name showing up on any company filing a big red flag.

Lincoln Park Capital claims to utilise a “long only investment strategy and looks for opportunities that may be currently out of favor with the investment community. The portfolio emphasizes life sciences, leveraging the Scientific Advisory Board and proprietary research”. A look at Lincoln Park Capital’s website will reveal the people at the helm (1). Two of the founders and managing directors are Joshua B. Scheinfeld and Jonathan B. Cope, they are both lawyers who hold Juris Doctors from Harvard University and the University of Chicago respectively. The two other founders are Richard C. Vogel and Robert A. Garcia, both of whom were an “integral part of the Executive Management team of a Lincoln Park Capital portfolio company, Omnisure Group, LLC”. Omnisure Group is a payment processing services company that specialises in financing automotive and home service contracts. Despite holding an A+ rating on the Better Business Bureau website, customer reviews are rather scathing, with several customers detailing how unauthorised payments being taken from their bank accounts (2) and most complaints being answered with what looks like a copy pasted template (3). As one can see there is nothing too unusual about Lincoln Park Capital’s founders but it does seem somewhat curious that two graduates from such prestigious universities would decide to join forces with two former managers of a business with a less than glowing reputation. Perhaps Omnisure’s business practices have taken a turn for the worse since Mr. Vogel’s and Mr, Garcia’s departure.

However, matters become very suspect when one starts to take a closer look at the companies that Lincoln Park has been financing through securities purchase agreements (SPAs). Firstly, we will take a more detailed look at four companies that have recently exhibited suspect price action in order to illustrate the nature and timing of these agreements. Later on, we will give an overview of the rates of return generated by 43 different companies since they entered into SPAs with Lincoln Park. Please note that we will be comparing historical share prices to those of March 4, 2020, as this date precedes the “Great Corona Crash”. 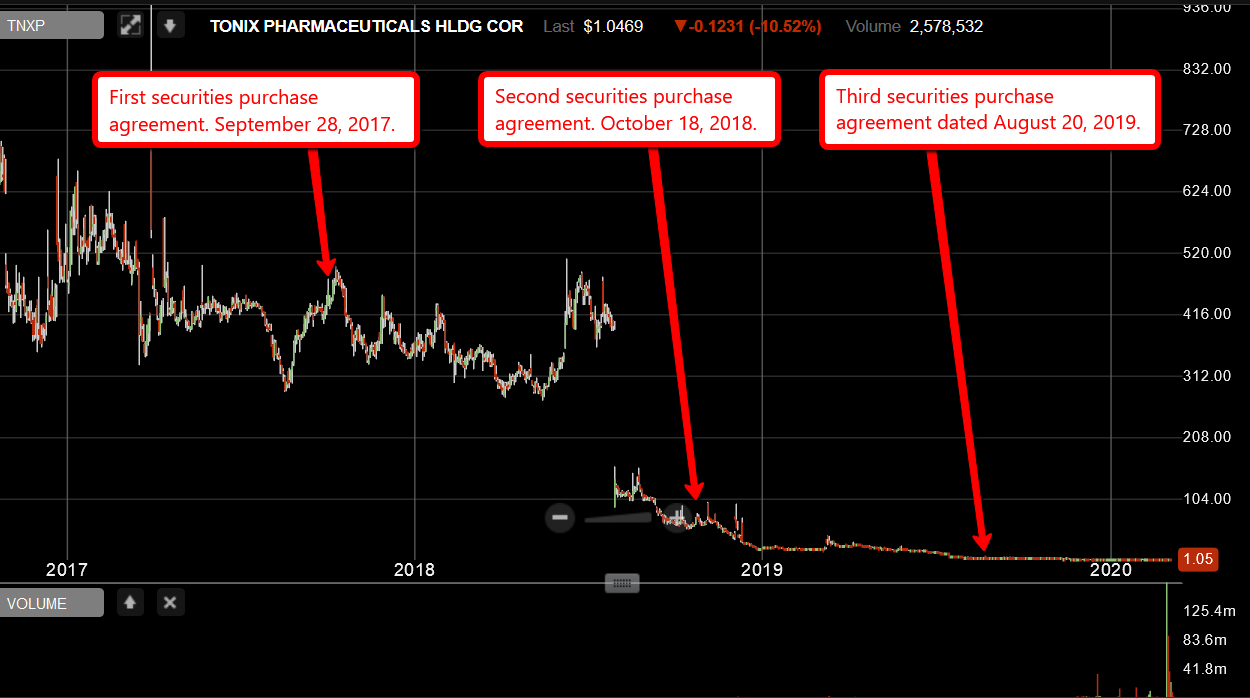 TNXP is a company we covered three weeks ago. It exhibited suspect price action due to press releases claiming it is on track to develop a covid-19 vaccine, similar to other biotech small/micro/nano caps. It also went on to announce later that week a share offering resulting in a significant price decrease (4). TNXP got first involved with Lincoln Park in September 2017, when it entered into a securities purchase agreement for up to $15 million (5). At the time its share price stood at $431… on March 4, 2020 it stood at little above $1. The company was in a difficult financial situation which went on to become even more so on July 27 2018, when its share price plummeted 70% as a result of the failure of the Phase 3 study of its lead product candidate (6). Since then things have gone from bad to worse with its share price continuing to go southward and its financials worsening as attested by the fact that it entered another securities purchase agreement for up to $15 million on October 18, 2018 (7)…. And another one for up to an additional $15 million on August 20, 2019 (8). Some of the terms are shown below:

It is worth pointing out that TNXP is associated with “colourful” third parties, such as a fund with links to a pump and dump ring and another one that was given a cease and desist order by the SEC. 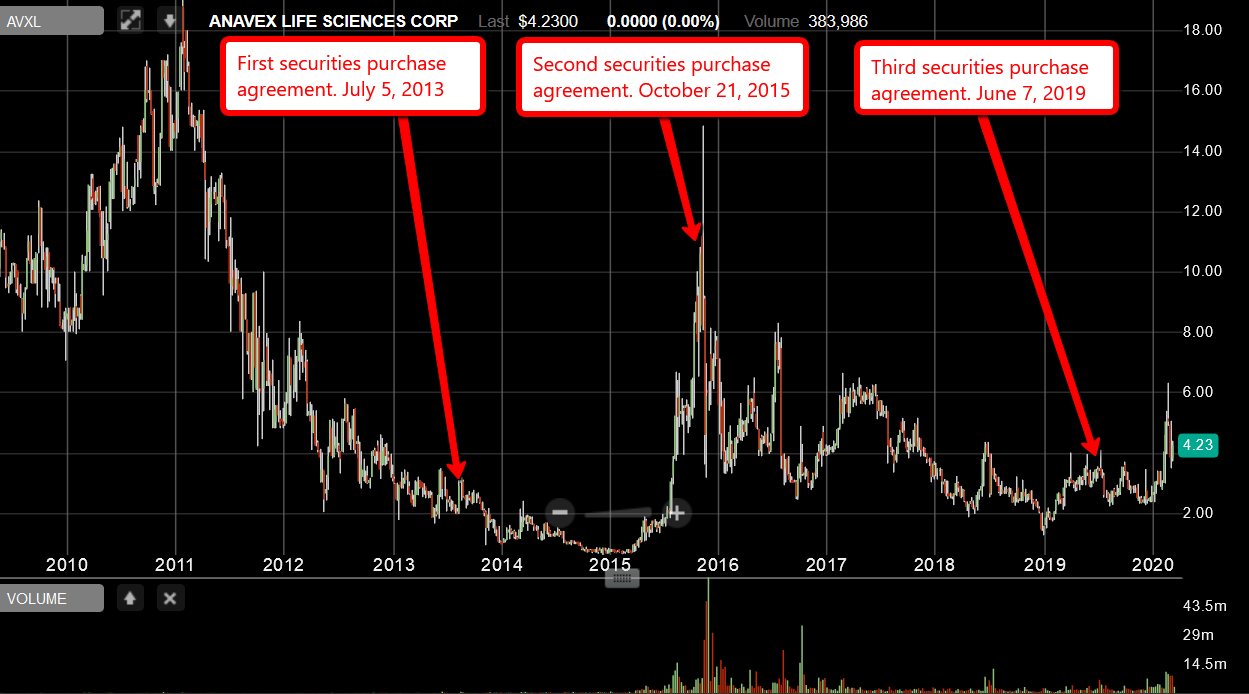 AVXL is a company we covered a month ago, between then and March 4, 2020, its share price decreased from around $6 to less than $4.20, going as low as $3.52.  Lincoln Park and AVXL first securities purchase agreement was filed on July 5, 2015, for a value of up to $10 million (9). At the time AVXL share price stood around $2.50, it went on to drop below $1 by the end of 2014 before recovering. Like other companies associated with Lincoln Park Capital, it raises other flags, such as a class action lawsuits for securities law violations, namely stock promotion and market manipulation. Although, the lawsuit was ultimately dismissed, it pointed out Anavex’s stock had been subject to significant promotion between 2010 to 2015. Furthermore, AVXL’s CFO was the VP of Finance for another company that also entered a securities purchase agreement with Lincoln Park in September 2013. She assumed the position of CFO at AVXL in October 2015 (10)… which coincides with the month in which AVXL and Lincoln Park entered into their second securities purchase agreement this time for a juicy $50 million (11). During this week, AVXL’s price was close to $10. As the graph above shows, shortly afterwards the price per share went on to nearly reach $15 before proceeding to experience a prolonged and highly volatile decline, a time period that coincided with heavy promotional activity as mentioned in the class action lawsuit.

These security purchase agreements not only allow Lincoln Park to purchase large amounts of shares, they also allow it to purchase them at a massive discount. Michael Goode clearly shows this by breaking down the 2015 AVXL security purchase agreement. In this agreement Lincoln Park could purchase shares at a price that is “the arithmetic average of the three lowest closing sale prices for our common stock during the 10 consecutive business days ending on the business day immediately preceding the purchase date of such shares”. This pretty much guarantees Lincoln Park a profit as long as the share price has been going up or sideways during the previous trading days.

ONCY is yet another company we have written about. The article was published on December 31, 2019 and highlighted other red flags such as poor financials, dilution and involvement with an underwriter with links to a pump and dump ring. At the time ONCY’s share price stood around $5, on March 4, 2020 it stood below $2.50. It should come as no surprise that on September 7, 2018, ONCY and Lincoln Park entered into a securities purchase agreement for up to $26 million (12). As the chart above shows, ONCY share price went on a prolonged decrease until late October 2019, when the company started putting out press releases with increased regularity (13). )ONCY’s involvement with Lincoln Park dates back to February 27, 2014 when they entered a $26 million securities purchase agreement (14). At the time ONCY’s share price stood around $17. 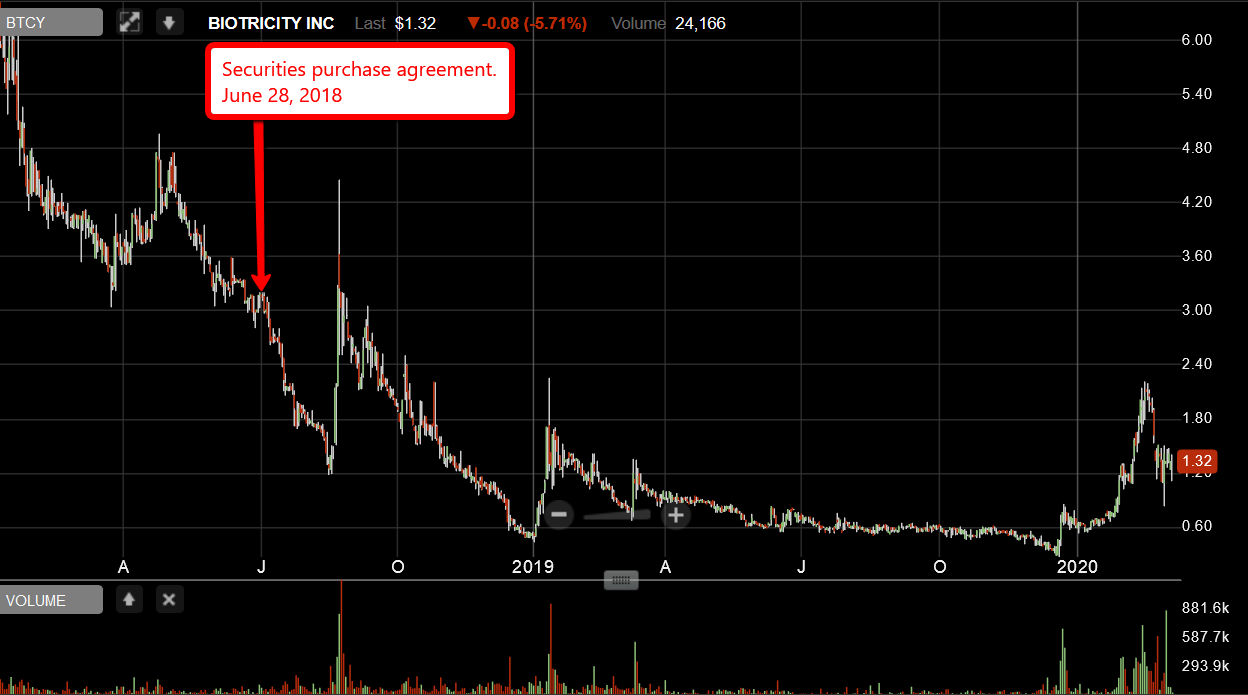 You guessed it. We also wrote a report on BTCY. Between the date of publishing of this report and March 4, 2020, the share price decreased from little under $2 down to less than $1.40. We raised a few red flags in that report, the most notable being paid promotion. As the above chart clearly shows, ONCY share price in early March was valued at a fraction of where it stood when it entered into its one and only securities purchase agreement with Lincoln Park (…thus far).

One could argue that we are cherry picking the worst tickers in order to show Lincoln Park Capital in the worst possible light. This is not the case. We went through the hassle of calculating the annualised rate of return between the date of the first SPA and March 4, 2020 (as this precedes the “Great Corona Crash”) of 43 publicly traded companies Lincoln Park has been involved over the last two years and a half. We give you the “Lincoln Park Capital LLC Index”, behold its “greatness”!!!!!: 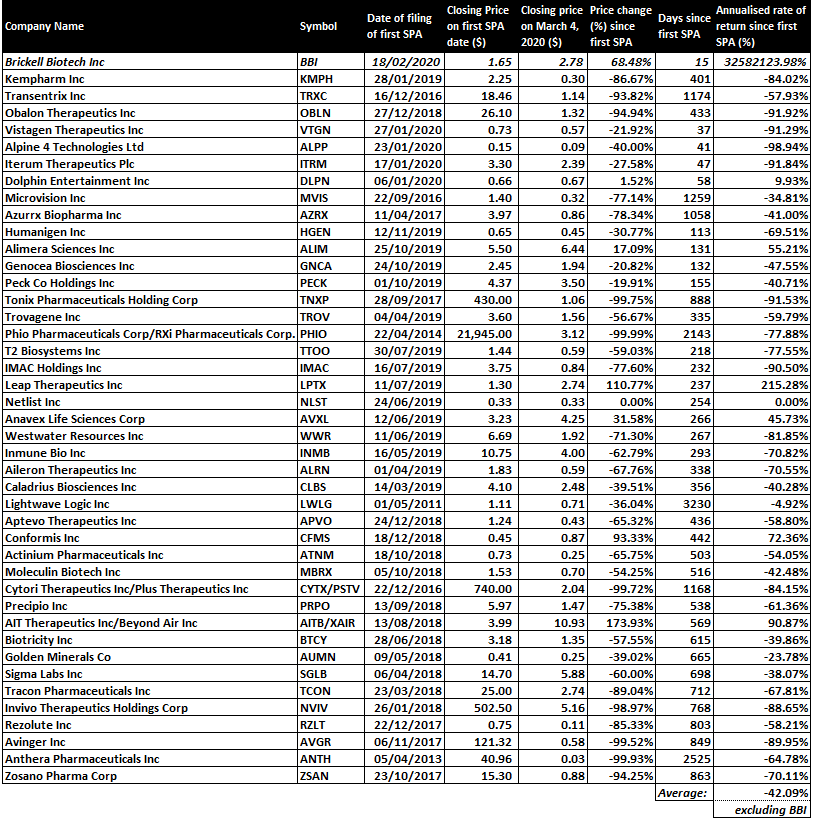 It is a massacre. If Bricknell Biotech Inc. is excluded (which it should be considering that it entered into a SPA with Lincoln Park in mid-February, 2020 and coincidentally enjoyed a significant share price appreciation a couple of days later… very suspect), the average annualised rate of return for these companies’ shares is a disastrous -42%.

It is crystal clear that companies that get involved with Lincoln Park end up experiencing long term declines in their share price. It should also be highlighted that another salient feature of these companies share price history is that it is often punctuated by spikes in price, volume and volatility that are promptly followed by price decreases of similar magnitude, and that these events coincide with increased press release output or promotion. Lincoln Park has been doing this for years; purchasing shares in failing companies that continue existing through extreme dilution and that also happen to experience price behaviour that is akin to that of P**p & D**p as time goes by. Who would have thought that this would be such a successful business model? (sarcasm).

Some might wonder how on earth this makes any sense. Why would a fund purchase shares knowing that the share price will very likely fall considerably over the coming months? The reason for this is that Lincoln Park purchases shares at massively discounted prices. This is clearly shown by the AVXL example above.

The saddest part of all of this, is that it is likely completely legal and thus common practice among small/micro/nano caps financiers. Lincoln Park is one of many vulture funds that operate in this way.

We thus advise investors to diligently read filings and be careful when dealing with any company that has a SPA in place, especially if Lincoln Park Capital is involved. Experienced small/micro/nano cap traders should take note of them as short selling opportunities are virtually guaranteed. And beginner investors should avoid them or treat them with extreme caution.

We also welcome our readers who have invested in or traded the above listed companies to please come forward and share their experiences. This will prove very valuable as a warning to current and prospective investors/traders about the perils of getting involved with companies that have entered security purchase agreements with Lincoln Park Capital.