Over the last seven weeks CYDY’s share price has a seen a near five-fold increase, daily trading volume has increased drastically and daily RSI (14) breached 80 several times. We looked into it a found some red flags that we would like to share with our readers. Flags include: obscene levels of dilution, poor financials, an underwriter with a horrific FINRA brokercheck record, a “spiral of death” creditor and highly questionable management. We believe that if CYDY’s price per share has a 40% short term downside.

CYDY’s financials are those of a distressed company. Its “hand to mouth” subsistence is made pretty evident by the fact that over the last six quarters, cash in hand at the end of the quarter over the last eighteen months has averaged less than $2 million while quarterly losses have averaged a whopping $14.5 million. Precarious indeed. It is also fairly obvious that CYDY has been issuing shares in order to stay afloat given that the number of outstanding shares has increased from 233 million to 399 million between August 31, 2018 and November 30, 2019, a 166 million increase. Such ludicrous levels of dilution should scare most investors away. During 2019, over 25 million shares at an average price of $0.38 have been sold through offerings and this is only a fraction of the 100 million shares that have were issued in this time period.

Furthermore, on November 30, 2019, there were a total of 178,591,849 outstanding warrants with an average exercise price of $0.71. It thus appears that there is still plenty of dilution in store.

CYDY has been no stranger to litigation over the last few years. In 2018 it was sued by an institutional shareholder due to the fact that members of CytoDyn’s Board of Directors (the “Board”) and the Board’s Compensation Committee breached their fiduciary duties by awarding excessive stock options to Nader Z. Pourhassan, CytoDyn’s CEO. It turned out that Mr. Pourhassan had obtained a total of 1,604,545 options which greatly exceeded the 1,000,000 cap per individual. The company had no choice but to settle by rescinding 604,545 of the CEO’s shares ( 1 ).

But the most concerning of CYDY’s legal ordeal involves its clinical trials. In August 2019, Richard G. Pestell, CytoDyn’s former Chief Medical Officer sued the company for wrongful dismissal. Mr. Pestell claims that the company inhibited and obstructed the performance of his duties as CMO at every turn. Furthermore, Mr. Pestell also claims that the reason for his wrongful dismissal stems from his objections to submitting an investigational new drug application and protocol to the FDA on the grounds that it was not safe for the study subjects ( 2 ).

Furthermore, the SEC gave CYDY a cease and desist order in January 2019, for violations of the federal securities laws in connection with the company’s Internal Control over Financial Reporting (“ICFR”). CYDY failed to create and implement effective ICFR for nine consecutive annual reporting periods from 2008 through 2016. What this means is that CYDY’s filings should always be read with a pinch of salt ( 4 ). 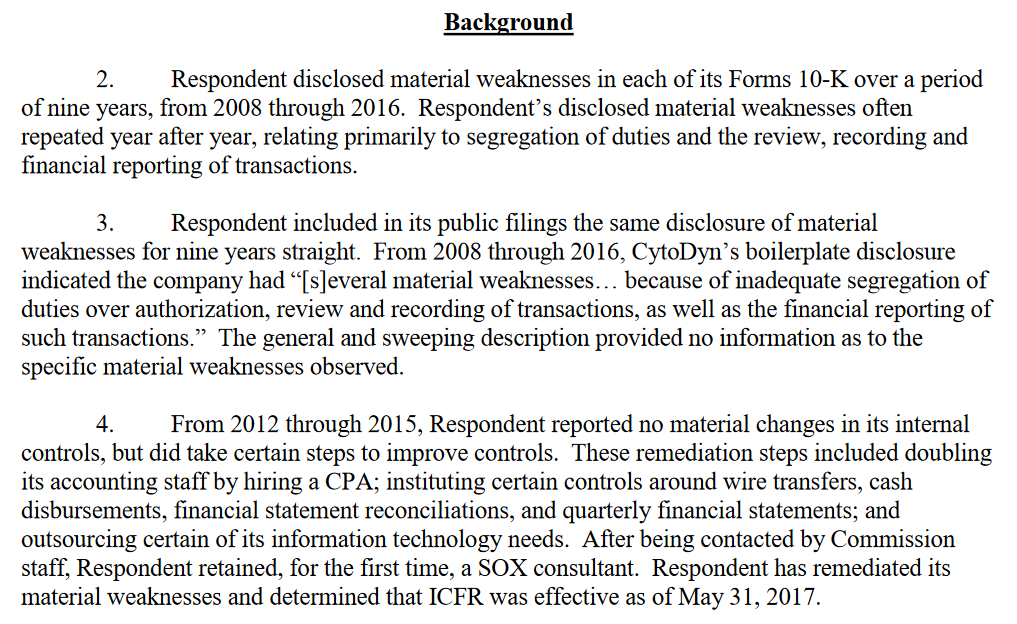 As previously mentioned, CYDY likes to print shares, or rather, its financial situation is so dire that is has no other choice. The placement agent for most offerings that took place last year was Paulson Investment Company LLC. This should be a case for concern as Paulson Investment Company has a horrendous FINRA broker Check record with 40 disclosure events, 30 regulatory events and 8 arbitrations ( 5 ). 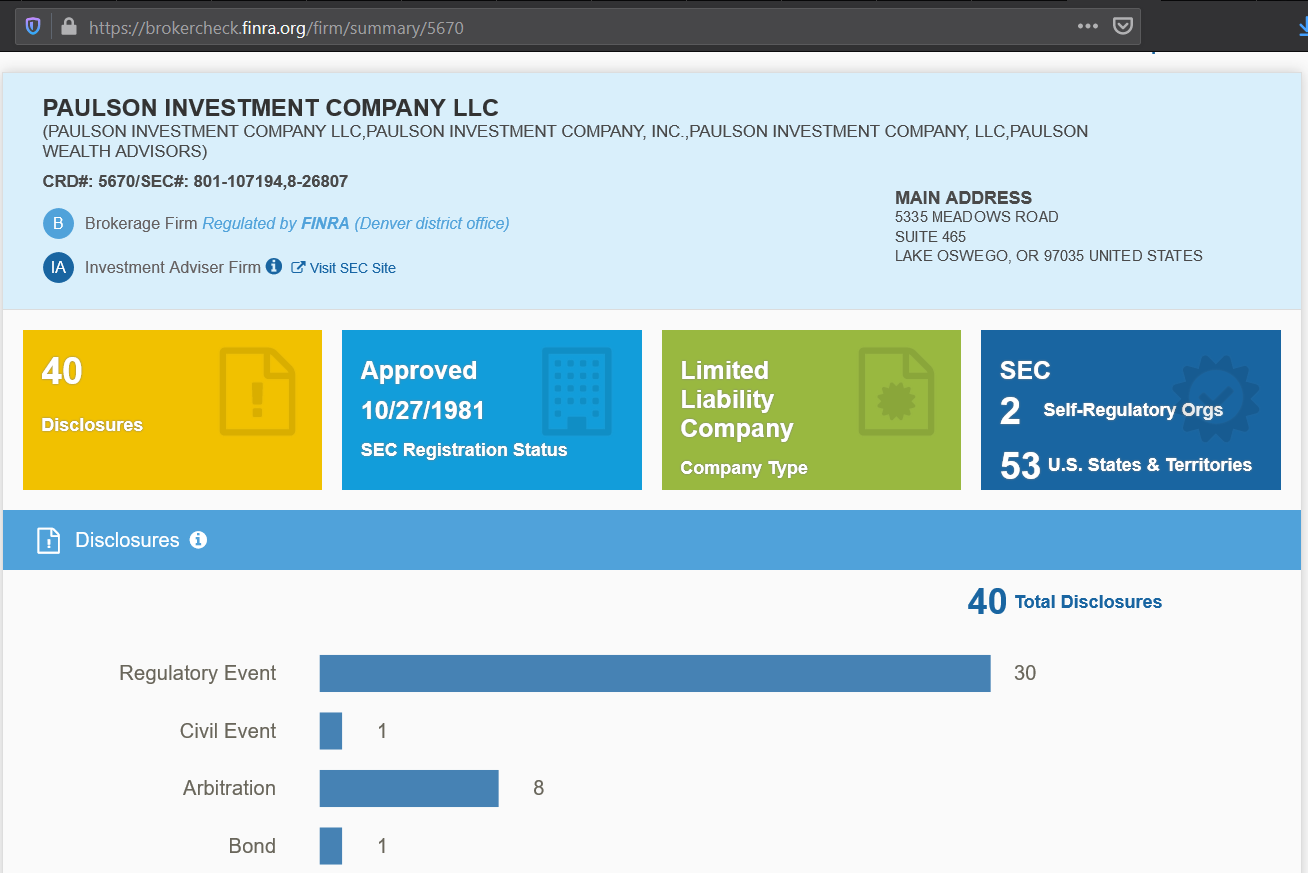 Some of these disclosure events are rather concerning as they include unregistered distribution of securities as well as churning and unauthorised trading:

CYDY also relies on debt to stay afloat. And one of its creditors has made been mentioned in more than one of our reports due to its highly dubious lending practices. This entity is Iliad and Research trading. In our INPX short report which was published on January 6, 2020, we highlighted how Iliad along with its affiliates entered into note purchase agreements that allowed them to obtain over 65 million shares of INPX common stock during the last three months of 2019 at an average price of less than $0.06 per share. INPX then went on to experience a seventeen-fold price increase followed by an 87% decrease over a three-week period. For more details here is a link to said short report. Iliad’s involvement as a creditor is thus a very bad omen.

There are other instances when Iliad has been involved with suspect tickers. According to our Asgard database (a proprietary database and stock selection tool), these tickers include: CV Sciences (CVSI), Netlist (NLST) and NovaBay Pharma (NBY).  These tickers have experienced long term decreases in their share price characterised by high levels of volatility.

Half of this debt is convertible into shares at a price of $0.50 per share since August 2019. Therefore, Iliad stands to make a lot of money if it chooses to sell these shares at current market prices. 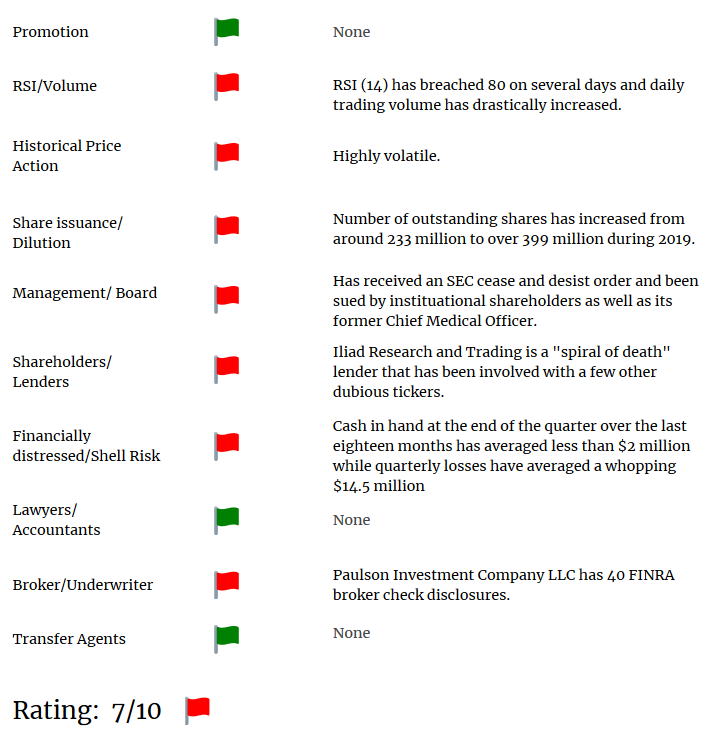 CYDY is a terrible investment. Bad financials, obscene levels of dilution, a “spiral of death” creditor, a dodgy placement agent and questionable management is a terrible combination. Stay away from this company’s unless you are a trader with experience with this type of tickers.

and there are likely more as RedChip IR is their agency and has been writing the articles placed on this list. Recommend you look at medicalnewsfirst.com for some highlights where the CEO had an article that calls him a “national hero” when they were fighting a short attack. CEO announced BLA for HIV filing and hyped some CoV patients while he filed a SEC Form 144 (not searchable on SEC site) to sell $15K worth of his option and didn’t file it with all the SEC filings on the company website. Adam Feuerstein got wind of it and covered in a STAT article about the pump and dump

Company also has several paid social media trolls that pump the stock aggressively on Seeking Alpha as well as authors that write laudatory articles for SA also. Michael Sheikh is one – look up in LinkedIn shows he is an “investor relations” expert and has a link to his IR company. Several others are anonymous but obvious placing links to all the articles in the publications listed above on SA for the naive fanboys.