IVERIC Bio, Inc. has had quite the run over the last six weeks with its share increasing from less than $1 to more than $5, volume consistently exceeding the 6-month daily average and RSI remaining relatively high. This is not a strange occurrence in the world of small caps but it deserves some attention nonetheless, especially when one takes a closer look at ISEE’s recent history. Back in 2016, ISEE (or Ophothotech (OPHT), as it was known back then) faced legal issues due to the fact that it misled investors about clinical result trials relating to its lead drug at the time Fovista, a treatment of macular degeneration that turned out to be a failure. Now it is parading its new macular degeneration drug, Zimura which also happens to be a gene therapy treatment, thus making it prone to unwarranted media hype and speculation and thus likely overvaluation. This is quite the coincidence when one bares in mind that on December 6, 2019, ISEE announced the offering of 6.25 million shares. Basically, what we have got here is a failed drug company that after defrauding its investors, it changes its name and spins its products into a novel and trendy therapy just in time to sell some very likely overvalued shares to more hopeful investors. Will history repeat itself? In this short report we will be taking a closer look at the company’s dealings over the last few years as well as the involvement of a shareholder with a very dubious track record.

ISEE is a clinical-stage bio-pharmaceutical specialising in the development of treatments for age related and orphan retinal diseases. Their current flagship drug is known as Zimura, an inhibitor of complement factor C5, which according to a press release put out just before its meteoric run, has successfully met its primary endpoint and reached statistical significance in a phase 2b randomised controlled trial in geographic atrophy secondary to dry age-related macular degeneration. ISEE previously went by the name of Ophthotech (OPHT) but changed its name earlier this year in order to rebrand itself as it transitioned to gene therapy. As we will see Ophthotech has been subject to some controversy that can make one sceptical about their latest clinical trial press release.

On the surface ISEE appears to be doing okay as far as its finances are concerned. According to their latest 10Q, the company currently hold over $100 million in cash, liabilities are under $12 million and net loss losses for the quarter amount to little over $15 million. This would indicate that the company has enough money to continue operating with its current level of expenses for another year or so.

As previously mentioned IVERIC Bio, Inc used to be known as Ophthotech Corporation (OPHT). OPHT was also in the business of developing ophthalmic drugs for the treatment of macular degeneration and its flag ship drug was known as Fovista. Very much like Zimura, Fovista was quite successful in its phase 2b clinical trials, so much so that Novartis was considering forming a partnership with OPHT, as the phase 2b trials indicated that adding Fovista to Novartis’ Lucentis (a former blockbuster but now waning treatment option for wet age-related macular degeneration) could prop up the sales of Lucentis.

But after two phase 3 trial failures it was pretty clear Fovista didn’t have much of a future, resulting in OPHT price falling by over 80% on December 2016. Unsurprisingly, many investors were very upset by such failure and wanted some answers, after all, according to Fovista’s phase 2b trials this scenario was highly suspect. This in turn led to a class action lawsuit against OPHT and its two cofounders. The lawsuit claimed that OPHT had violated Sections 10(b) and 20(a) of the Securities Exchange Act of 1934, 15 U.S.C. §§ 78j(b), 78t(a), and Rule 10b-5, 17 C.F.R. § 240.10b-5, by making materially false and misleading statements regarding the parameters and results of clinical studies for Fovista. It turned out that phase 2b trials for Fovista had been “tampered” with, as patients in the control group had lesions which, on average, were approximately 17% larger than the lesions of those patients in the Fovista treatment group, an important fact that had been omitted from a June 13th 2012 press release.

What is more worrying is that years later, on November 8th 2016, during a conference call with Morgan Stanley an analyst voiced concerns about whether the “baseline imbalance [in] lesion size [might have] impact[ed] the strength of the Phase 2 data”, to which an OPHT co-founder responded that those concerns had “no validity.” Furthermore, both co-founders sold a majority (66.3% and 82.2%, respectively) of their personally-held Ophthotech common stock, “for proceeds of” approximately $22.6 million and $22.9 million during the class period.

Although, one of the co-founders stepped down after this whole debacle, the other one still remains at ISEE as an executive chairman.

One more thing to bear in mind is that Tang Capital Management currently hold 600,000 ISEE shares. Tang Capital Management is no stranger to controversy as it is a company that has a track record of being involved with highly volatile stocks according to our Asgard database, a proprietary database and stock selection tool that identifies high-probability fraudulent scam companies based on several characteristics. The most recent example La Jolla Pharmaceutical Co. which exhibited price behaviour akin to a pump and dump in early June this year. Tang Capital also ran into some serious issues with the SEC back in 2013 due to its involvement with Monogram Biosciences in May 2006. 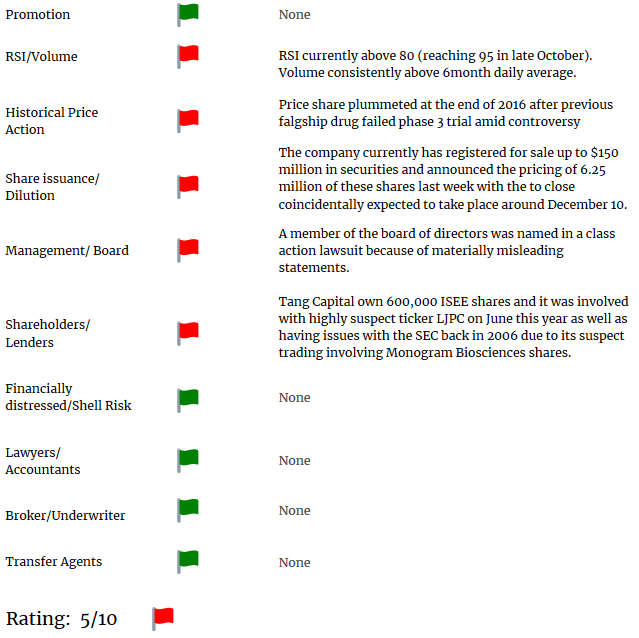 We do not believe purchasing ISEE shares to be a wise investment. The fact that the current share price increase can be attributed to phase 2b clinical trials is not good enough reason to get involved on the long side, especially if one bares in mind that the company has already faced issues with the SEC for misleading investors about the clinical trial results of its previous (and failed) macular degeneration treatment (Fovista) which resulted in its share price plummeting by over 80% and announced last week that it will be selling 6.25 million shares through a public offering that closes around December 10. Add to this the fact that the company has recently espoused gene therapy as its new treatment method, which lends itself particularly well to unwarranted media hype and share overvaluation and it is possible to see how new investors could be very unhappy in the not too distant future if history were to repeat itself. Furthermore, over half a million ISEE shares are currently held by a shareholder that has a track record of issues with the SEC and involvement with tickers whose price behaviour is eerily similar to that of a pump and dump. We thus advise investors to stay away from ISEE and believe that profits can be made on the short side provided the proper circumstances present themselves over the coming hours/days.