Like all other tickers featured in our short reports, PTI’s price action has exhibited unusual behaviour recently. Over the last three weeks its share price has increased by more than 3 00% (from under $1 to breaching the $4 mark) and its trading volume has been considerably above the 6-month daily average. It didn’t take much digging around to unearth a couple of other major red flags, namely: potential clinical trial results manipulation and a large shareholder that has also held the shares of several other volatile tickers and that provided the initial funding for a company whose executives went on to be convicted of fraud by the Department of Justice.

Proteostasis Therapeutics, Inc. (PTI) is a clinical stage biopharmaceutical company developing small molecule therapeutics to treat cystic fibrosis and other diseases caused by dysfunctional protein processing.  It was founded in 2006 and became a public company in early 2016, since then its share price has experienced a fair amount of volatility as well as an overall downward trend. In early November the company announced the completion of enrolment of a global Phase 2 study that seeks to assess the efficacy, safety and tolerability of its proprietary combinations made up of PTI-801, PTI-808 and PTI-428, which coincided with the start of an upward and pronounced upward trend in its price action.

On the surface PTI appears to be doing okay as far as its finances are concerned considering it is still an early stage biopharmaceutical company. According to their latest 10Q, the company currently hold over $35 million in cash, total liabilities are under $24 million and net loss losses for the quarter amount to just under $13 million. This would indicate that the company has enough money to continue operating with its current level of expenses for another six months or so.

However, there is a piece of information on this 10Q that should give current and potential investors reason for concern. In May 2019 the company entered an “at-the-market” sales agreement for up to $56 million. Given PTI’s current share price it would mean that dilution would be reduced if shares were to be issued under this agreement. But sizeable dilution would occur nonetheless given the company’s number of outstanding shares currently stands at around 50 million.

As previously mentioned PTI’s share price began its recent upward trend at the beginning of November when it was announced that Phase 2 trials for the combined use of PTI-801, PTI-808 and PTI-428 had completed enrolment. PTI-428 is what is called an amplifier drug meaning that it is to be used in conjunction with a proven and effective cystic fibrosis treatment in order to increase its effectiveness. Its inclusion in the latest Phase 2 trials should be a cause for concern as pointed out on March 2018 when Kerrisdale Capital published a report in which it brought into serious question the results from a small Phase 2 proof-of-concept clinical trial that looked at the use of PTI-428 as an amplifier in conjunction with Orkambi (ivacaftor/lumacaftor) that led to 100% share price spike with the entire share count at the time turning over by more than twice which was promptly followed a nine-million share public offering (a clear attempt to capitalise on an inflated share price as he company promptly announced a nine million share offering which was followed by a significant share price decline the following week). It turned out that the results of these trials were heavily skewed for a two main reasons: Firstly, the placebo group in this study was anomalously bad as a result of it being comprised of only 4 individuals (while the treatment group had as many as 20).  Secondly, the company chose not to report a host of secondary outcomes that had been it had initially intended to record according to the Phase 1 and 2 trials database on ClinicalTrials.gov. For greater detail please have a look at Kerrisdale Capital’s full report linked below.

This probably means that one should be highly sceptical about any clinical trial results presented by PTI as it would appear that it is willing to manipulate the studies in order to create an illusion of effectiveness and success about their products.

A dodgy and unscrupulous shareholder:

But New Enterprise Associates is not merely “guilty by association” with companies with dubious price action, is also “guilty by association” with companies whose executives have been charged with federal crimes. They have one big skeleton in their closet related to their involvement with Acclarent. Acclarent is Johnson & Johnson owned medical device manufacturer that was initially funded by New Enterprise Associates. In mid-2016some of Acclarent’s executives were found guilty of aggressively marketing and selling adulterated and misbranded products which had not been approved by the Food and Drugs Administration, resulting in their conviction for ten misdemeanour counts and Johnson & Johnson having to pay $18 million in fines to the Department of Justice. 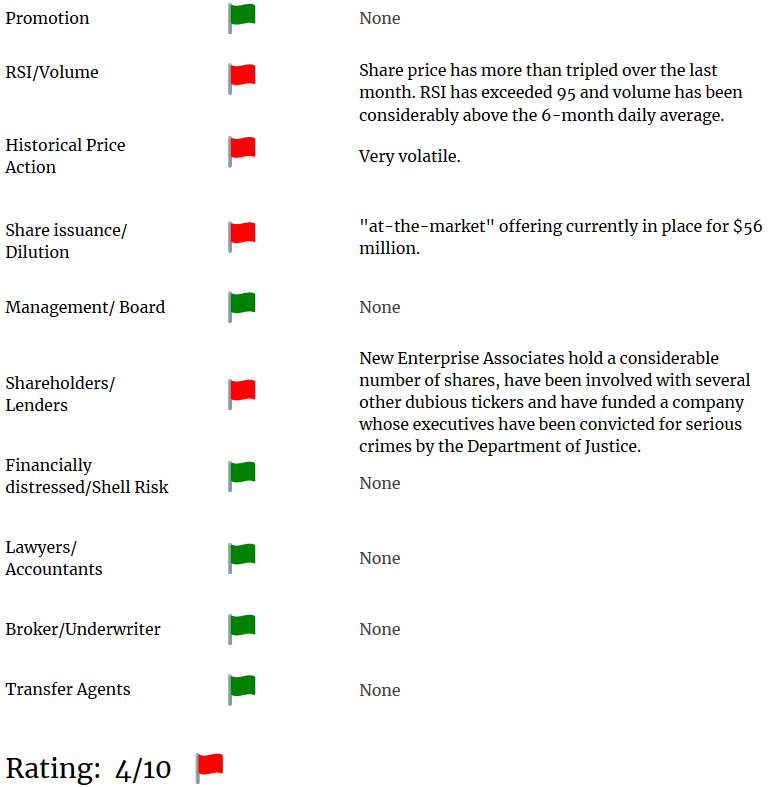 PTI raises red flags that should give current and potential investors reasons for concern. Its track record of unreliable clinical trials, share offerings and involvement with institutional investors with a highly suspect background are a fairly good indication that its volatile price action history is likely to continue. We thus advise investors to stay away from PTI and believe that profits can be made on the short side provided the proper circumstances present themselves over the coming hours/days.