Isracann Biosciences Inc. has had quite the run over the last ten trading days with its share price increasing by nearly 100% from less than $0.27 to more than $0.50, volume consistently exceeding 2 million shares a day with yesterday’s volume exceeding 8 million (average daily volume over the last 3 months has been under 1 million) and RSI breaching 85. This is not a strange occurrence in the world of small caps but it deserves some attention nonetheless, especially when one bears in mind the company’s recent history. In this short report we will be taking a closer look at the company’s ever-changing nature (from gold exploration to bitcoin mining to cannabis farming), its addiction to printing cheap shares and recent paid promotional activity.

The company has a not too long but fairly convoluted history. It was first incorporated in Alberta Canada on January 21 2010, under the name “Sypher Resources Ltd.”, an opportunity focused gold exploration company. I would appear things didn’t quite “pan out” so on July 23, 2014, in connection with a reverse takeover transaction with Atlas Cloud Enterprises Ltd., the Company changed its name to “Atlas Cloud Enterprises Inc.”, a clouding computing company. Once again this “business model” didn’t quite take off so on July 27, 2018, the Company changed its name to “Atlas Blockchain Group Inc.”, a bitcoin mining company (do we need comment how comically dubious this is). Thus, the “natural progression” was to become a cannabis company… which it did on July 18, 2019, when it changed its name to “Isracann Biosciences Inc.” when it “acquired” an Israeli Cannabis company. If this sequence of events is not making your trading/financial “spidey” sense tingle just a little bit, we are afraid you might be a bit too naïve to be involved with OTC companies and should abstain from trading this type of stocks. Furthermore, Isracann makes some grand claims when it states that it is “Israel’s First Pure-Play Cannabis firm”. These claims don’t seem reliable as a quick google search will reveal several other Israeli cannabis companies such as Breath of Life International Ltd., which filed a preliminary prospectus for a proposed initial public offering of shares on the Toronto Stock Exchange (TSX) back in May (1). Furthermore, we were unable to confirm whether ISCNF has any cannabis licences in Canada by looking at their filings as they all state that these supposed licenses are waiting for approval. They also claim have a partnership with an Israeli Cannabis farm by the name of “JV Farmer” through one of its subsidiaries that goes by the name of Cannisra Holdings, but we were also unable to confirm the existence of said farm or any details relating to it besides ISCNF paying the farmer a mere CA$7,500 a month for its cultivation/production services.

ISCNF’s SEC filings are very limited, amounting only to three Form-Ds. And its most recent financial information as far as USA filings are concerned pertains to quarterly financial report dating back to February 28 when the company’s shares still traded under the name Atlas Blockchain group. This report is an OTC disclosure filing which means that it less reliable than its SEC equivalent. Consequently, a look must be taken at its SEDAR filings under the ticker IPOT where the most recent Interim Financial Statement report dates back to the quarter ended August 31 (this document is titled “Interim Financial Statements/report- English” and was filed on October 30) (2). For this time period a net loss and comprehensive loss of nearly CA$1 million was incurred. Furthermore, the company held CA$2.6 million in cash, meaning that it was not flush with cash at the end of August and will likely run out of it sometime early this coming year.

This is a massive red flag as it can be easily argued that ISCNF is little more than share printing machine, willing to hand out massive numbers of shares for certain investors and insiders at laughably low prices. If any of these shares were to be sold at ISCNF’s current trading price, the seller stands to make a considerable sum of money.

Paid promotion… a lot of it

ISCNF’s biggest red flag is the amount of paid promotion it has enjoyed. It has been featured on pump sites such as equity.guru on seven different occasions this year (3) due to the fact that the company is one of equity.guru’s marketing clients. It also has its very own landing page courtesy of hotstocksreview.com. According to the disclaimer on the landing page: “HotStocksReview.com is a website owned by Mountain Capital Corp (“Mountain”). Mountain has received $50,000 USD from Isracann Biosciences Inc. for the purpose of preparing, hosting and advertising this content for a period of 30 campaign days. This compensation constitutes a conflict of interest as to our ability to remain objective in our communication regarding the profiled company. Because of this conflict, individuals are strongly encouraged to not use this newsletter as the basis for any investment decision.” (4). 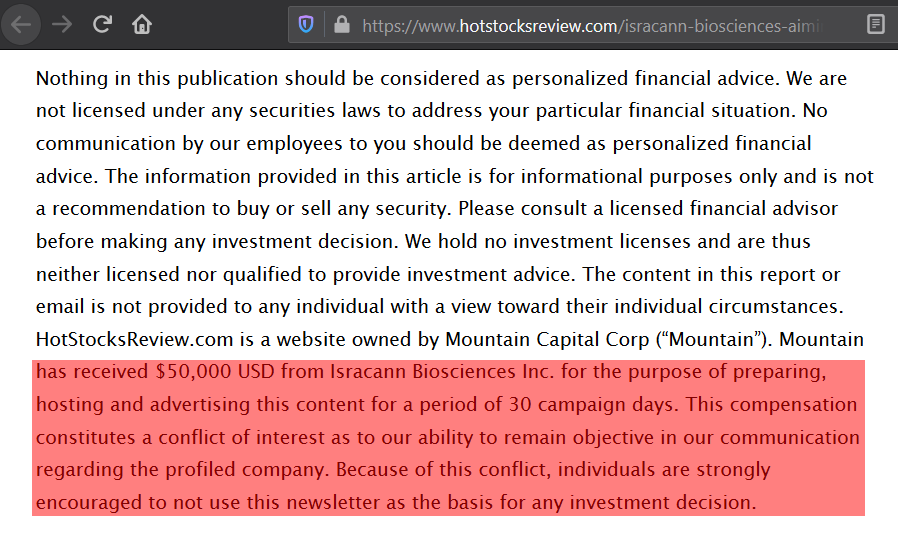 Needless to say, this should make investors extremely sceptical about ISCNF’s recent price run as it indicates that it is likely predicated on positive “news” that have they have paid for as opposed to anything of real substance. Good companies don’t need to pay for good publicity, especially when this fact is made so explicitly clear in the disclaimers.

Furthermore, this is not the first time these shares have been subject to promotional activity. On September 9, 2018, when the company was known as Atlas Blockchain, it issued a statement regarding recent trading activity as its shares had traded in a range of $0.079 – $1.25 in the past 52 weeks and in the last month, shares had traded between $0.10 and $0.17. The company claimed that it “only became aware of certain promotional activity on its securities on September 5, 2018 when it received correspondence from OTC Markets” (5). Management playing dumb at the time should come as no surprise as management/consulting and short-term benefits amounted to $484,337 in the nine-months ended February 2019 compared to $166,654 in the same period 2018. While this amount for consulting services paid to management may seem trivial, forensic accountants commonly view consulting expenses paid to directors, officers, or other members of management as an accounting red-flag.  Consulting expenses paid to these related-parties may be for services of limited value to the company or even worse may be paid without any services being performed at all, which would constitute fraudulent financial reporting. This is a strong indication that management at the time lacked integrity and therefore financial results as a whole cannot be trusted, especially as they were unaudited. But what about the current management? How much has changed?

Management: Some old faces and some dubious new ones

Unsurprisingly, two directors have kept their roles after Atlas Blockchain turned into Isracann, they go by the name of Yana Popova and Sean Bromley. But what about the new ones? The most notable one is the new CEO, Darryl Jones. According to Isracann’s website, Mr. Jones currently serves on the board of other public companies such as Strikepoint Gold (TSXV: SKP/OTC: STKXF) and Voltaic Minerals Corp. (TSXV: VLT/OTC: VTCCF), and was also involved in the early stages of True Leaf Medicine (CSE: MJ/OTC: TRLFF). These companies are not the most reputable ones and a quick look at their price history will show that all of them are characterised by significant price increases followed by significant price decreases much like Isracann’s price history when it used to trade under different names/tickers. Perhaps this has something to do with the fact that according to ISCNF’s latest “Annual information form” which was filed on December 18, Mr. Jones was described as a promotor as he holds 523,333 shares, 439,999 warrants and 1,000,000 options, and has received an aggregate sum of $84,000 in cash as compensation for his services. It thus appears that the CEO’s main function is not so much manage the company but rather to fulfil promotional functions in exchange for large numbers of shares, warrants and options as well as dubious cash compensation (1). 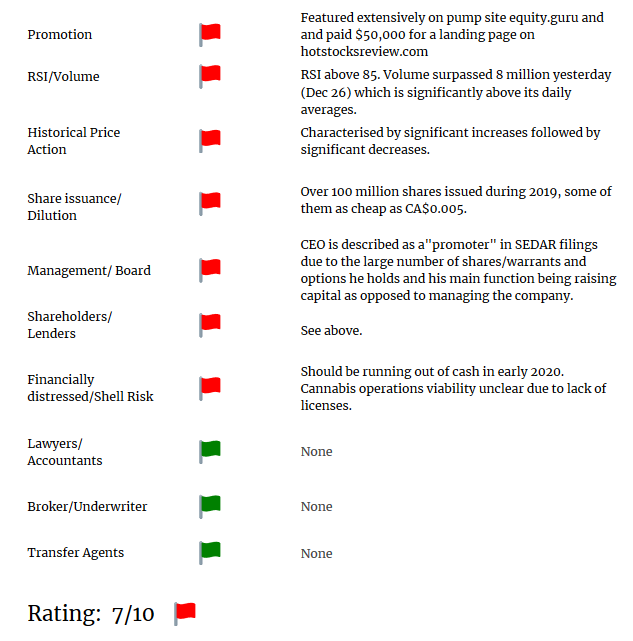 ISCNF looks like an awful investment. The combination of subpar unaudited financials, huge numbers of recently and cheaply issued shares/warrants/options, paid promotion, and a management team that has been involved with the company’s previous shady iterations and whose main function appears to be promoting the company in exchange for management/consulting fees/cheap shares, is extremely dubious to say the least.