In the sport of hockey, the term “Hudson Bay rules” is used to describe a style of play where there are no penalties called. It is thus a euphemism for an aggressive style of play that disregards the rules of the game. It should perhaps come as no surprise that we have decided to feature Hudson Bay Capital Management in our third investor warning that takes a closer look at so-called “dubious” third parties. We must emphasise that this article is no way accusing Hudson Bay Capital Management of breaking any laws, regulations, duties or contractual obligations (excluding matters that have been settled with the SEC), we are simply highlighting how this fund finds itself repeatedly involved with publicly traded companies that exhibit highly unusual yet somewhat predictable share price behaviour.

Hudson Bay Capital’s website is very slick (1), as to be expected from a multi-billion dollar asset management firm. It states that “persistent profitability has been the focus that has defined our approach since inception” and that “our investing philosophy has deep, personal roots”. These personal roots pertain to its founder, managing partner, CEO and CIO, Sander R. Gerber. Mr. Gerber is a University of Pennsylvania graduate with over 25 years of experience in “multiple securities classes and derivatives across a broad range of strategies.” (2). As the data presented in this article shows it appears that Mr. Gerber has a penchant for small/micro/nano caps and that if he is focusing on “persistent profitability” he is probably not taking a long-term investor approach. 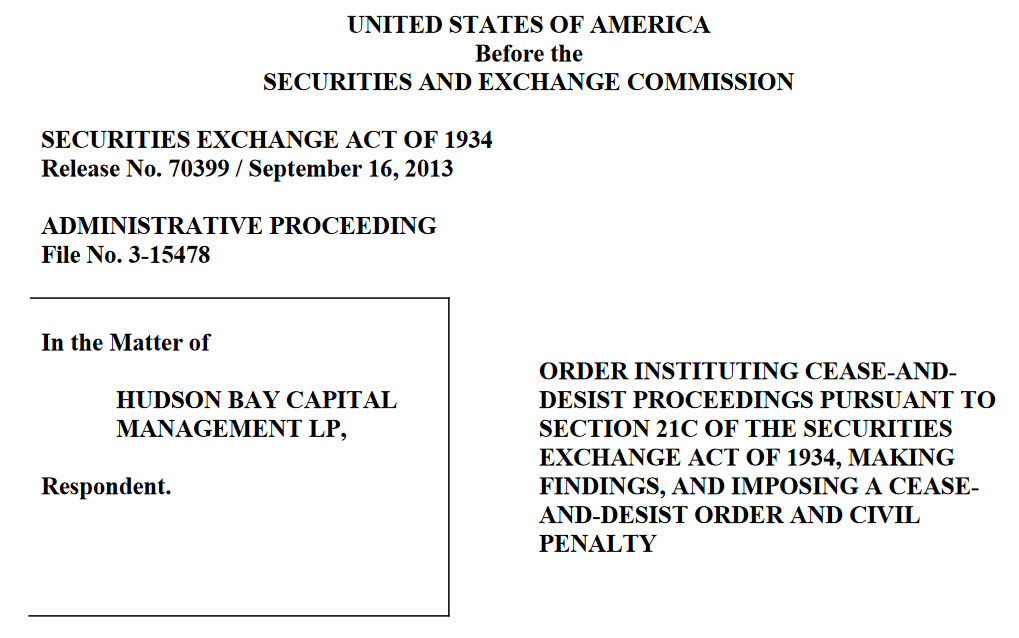 Then in April 2019, MabVax Therapeutics, a San Diego based biotech company named in the Securities and Exchange Commission’s stock manipulation case against small-cap investor Barry C. Honig, claimed Hudson Bay Capital played a pivotal role in inducing the company to go public via a reverse merger so that Barry C. Honig and his crew could take control of the board and influence the stock. For more information on the matter we recommend you take a look at Teri Buhl’s excellent article (5).

Furthermore, Yoav Roth, one of Hudson Bay’s managing partners, was named in a subpoena (p.8) sourced by Teri Buhl. This Subpoena is part of the SEC investigations into Barry C. Honig alleged pump and dump ring and relates to all documents concerning communications concerning BioZone, MGT or Mabvax between Roth and Michael Brauser. Brauser is another member of the alleged pump and dump ring

We will take a more detailed look at two companies that have recently exhibited unusual price action in order to illustrate the timing at which Hudson Bay Capital purchased a stake in these companies as well as the red flags they raise. Later on, we will give an overview of the rates of return generated by 34 different companies since Hudson Bay Capital purchased a stake in them. Please note that we will be comparing historical share prices to those of March 4, 2020, as this date precedes the “Great Corona Crash”. 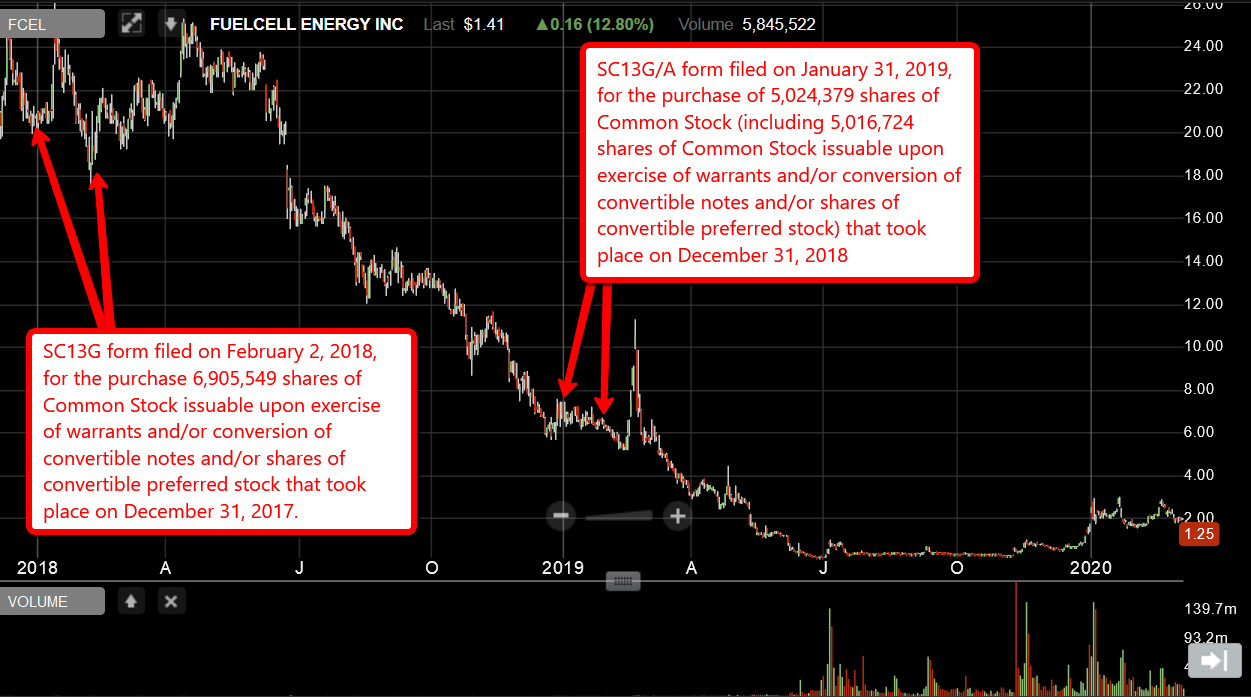 We wrote an article about FCEL on January 2, 2020. In it we highlighted the company’s difficult financial situation and a borderline usurious financing agreement that resulted in obscene levels of dilution. Between the time of publishing and March 4, 2020, the price per share dropped from around $2.50 to $2.00.

As the above graph shows Hudson Bay Capital has been involved with FCEL for at least two years, filing Schedule 13Gs forms relating to warrants that can be exchanged for millions of shares. Both forms happen to have been filed shortly after significant price decreases and shortly before significant price increases (6) (7). It would thus appear that Hudson Bay Capital is great at trading in and out of highly volatile tickers, but given its previous brushes with the SEC one could hardly be blamed for viewing this with a certain amount of scepticism and cynicism. 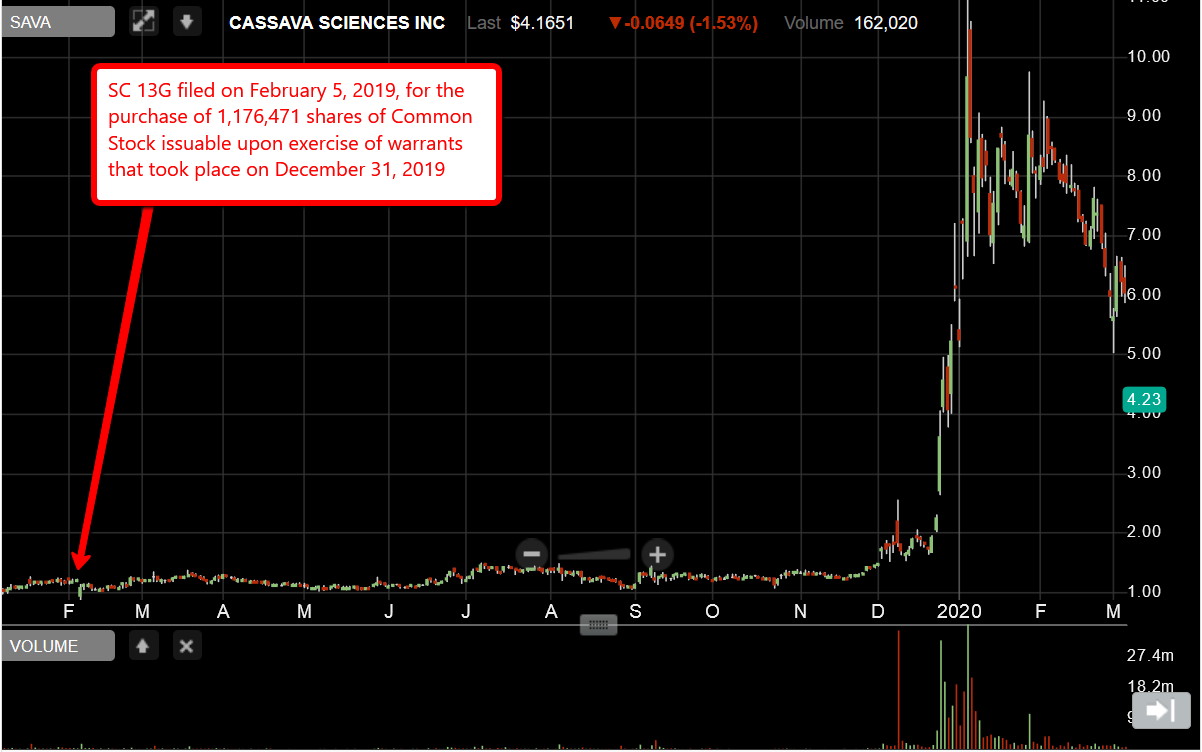 Unlike FCEL, SAVA has seen a significant increase in its share price since Hudson Bay Capital acquired a stake in February 2019 (8). SAVA was formerly known as Pain Therapeutics (PTIE), and it is a company that is no stranger to controversy. Its lead drug candidate was known as Remoxy, which was in development for many years (nearly a decade and a half) and was subject to over 50 studies at a cost in excess of $100 million. Despite its clinical trials being “successful” the FDA did not approve it. This infuriated CEO and founder Remi Barbier who went on to accuse the FDA of making “math errors, material mistakes or misrepresentations” (9).

However, there is a bit more colour to PTIE/SAVA’s history. Around mid-2015 a class action lawsuit was filed against the company. The plaintiffs in the lawsuit claimed that “PTI(E) and the individual defendants caused shares in PTI(E) to trade at an artificially high price by concealing certain information from the public regarding the REMOXY FDA-approval process. Specifically, Plaintiff claims although Defendants knew they had failed to resolve problems with REMOXY’s stability that caused the FDA to reject the first REMOXY New Drug Application (NDA), Defendants led the public to believe those problems had been resolved while reapplying for FDA approval. Plaintiff further alleges despite knowing the second NDA would also be rejected, PTI(E) rewarded the individual defendants with unjustifiable compensation packages it asked the shareholders to approve”. Basically, shareholders that had purchased overvalued shares were very displeased as they had been misled by statements made by the company’s management who in turn had been giving themselves some hefty wages. The lawsuit was settled out of court when the company compensated shareholder with the sum of $8.5 million (10) As we can see PTIE/SAVA has had a troubled recent history, but what about its long term history? We believe the share price chart since its inception is rather telling: 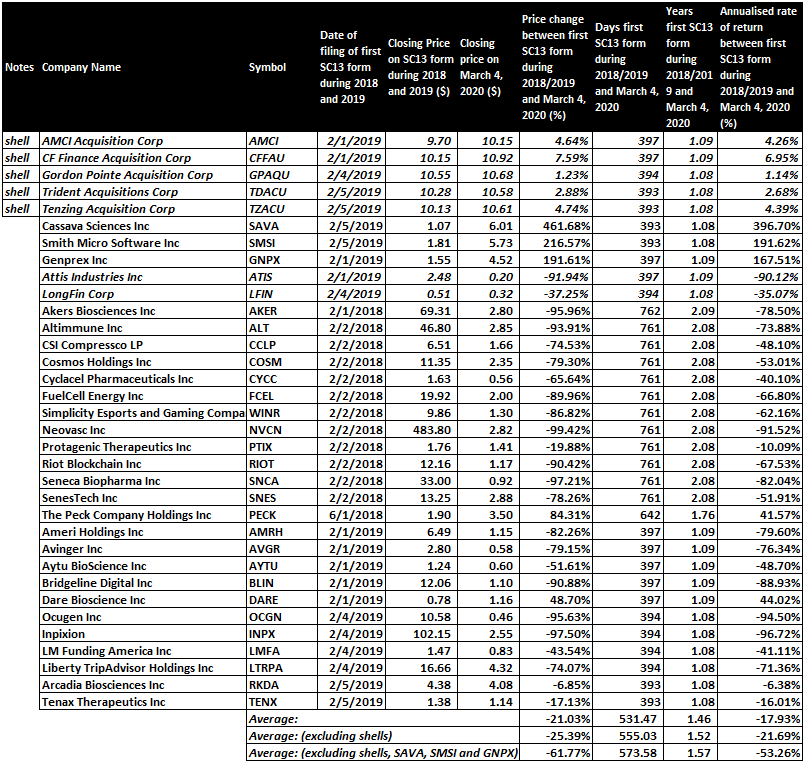 It is fairly clear that the vast majority of companies that Hudson Bay Capital gets involved with (excluding shells) experience significant decreases in their share price.

Given Hudson Bay Capital’s previous brushes with the SEC and the unusual price action of companies that it gets involved with, we advise investors to diligently read filings and be careful when dealing with any company in which Hudson Bay Capital has or has had a stake in. We also advise investors to keep an eye on any reverse mergers involving the shells listed above. Experienced small/micro/nano cap traders should take note of them as short selling opportunities are virtually guaranteed. And beginner investors should avoid them or treat them with extreme caution.

We also welcome our readers who have invested in or traded the above listed companies to please come forward and share their experiences. This will prove very valuable as a warning to current and prospective investors/traders about the perils of getting involved with companies in which Hudson Bay Capital has or has had a stake in.