Like all other tickers featured in our short reports, AVXL’s has exhibited unusual behaviour recently, with its price per share more than doubling over the last three weeks. Furthermore, daily trading volume has been considerably above the 6-month daily average and RSI (14) has breached 85. Anavex has gotten itself into a fair number of headlines over recent years, so it didn’t take much digging around to find enough material for a short report. As we will see Anavex raises a few red flags, such as:  dilution issues, links to stock promoters and a security purchase agreement with one of the most dubious institutional shareholders in OTC markets. Lyra Insight was kind enough to collaborate with us on this report.

Anavex describes itself as “a clinical stage biopharmaceutical company engaged in the development of differentiated therapeutics by applying precision medicine to central nervous system (“CNS”) diseases with high unmet need”. Its lead compound is ANAVEX 2-73 and it is being developed to “treat Alzheimer’s disease, Parkinson’s disease and potentially other central nervous system diseases, including rare diseases, such as Rett syndrome, a rare severe neurological monogenic disorder caused by mutations in the X-linked gene, methyl-CpG-binding protein 2 (“MECP2”)”.

AVXL’s financials over the last fifteen months leave a lot to be desired. Between December 2018 and December 2019, the number of outstanding shares increased by more than 20% from nearly 47 million to over 57 million. Despite such liberal share issuance, the cash generated from share sales is not enough to compensate for the company’s quarterly losses, as net quarterly losses have averaged $6.6 million over the last five quarters while net cash from financing activities has averaged $5.8 million. What is more concerning is that this is unlikely to change anytime soon as on July 3, 2019, the company filed an S-3 for the sale of $250 million worth of shares and warrants  ( 1 ).

But the most notable one was perhaps Dr. Kanak Kanti De, whose claims about Anavex drew attention towards him and led to his medical credentials being questioned and his role as the leader of at a stock promotion firm being exposed. In response “Dr.” Kanti De produced what looked like a forged diploma from the University Calcutta ( 4 ).

In 2015, Anavex, Christopher Missling and Sandra Boenisch (current CEO and CFO) were named as defendants in a class action lawsuit for securities laws violations, namely stock promotion and market manipulation ( 2 ). Although, the class action was ultimately dismissed ( 3 ), it pointed out Anavex’s stock had been subject to significant promotion between 2010 to 2015. Promotion was carried out by entities such as Hicks and Lowe Report, Agora financial, K Street Financial/Wyatt Investment Research (which led to the British Columbia Securities Commission halting Anaxex trading in 2013), Wide World Stocks, Mauldin Economics, CEO Live Insider Report, King Penny Stocks, among others. 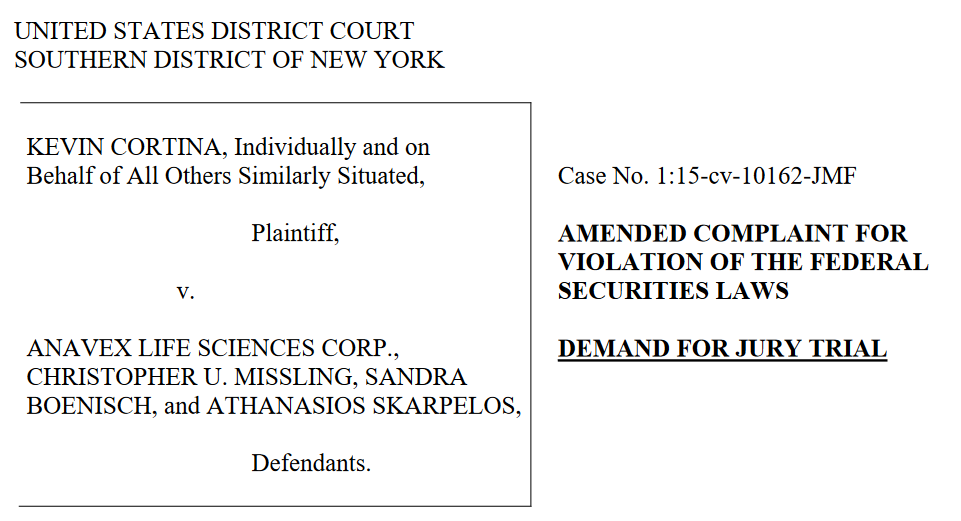 It thus seems that share holder value is not a priority for the company’s management. Especially, if one bares in mind other highly dilutive agreements AVXL has in place with a very dubious third party. More on this later.

We present to you once again, Lincoln Park Capital. As previously mentioned, it is one of the most dubious institutions currently operating in OTC markets. We first mentioned them in our ONCY investor warning from Dec 31, 2019. These two parties entered into a $26 million security purchase agreement on September 2018. ONCY’s share price went to decrease from a $6 high on December 31 (when we published our investor warning) to below $3 on January 28, 2019). And we last mentioned Lincoln Park Capital in our BCTY short report from February 13, 2020 (last week) with whom they also have in a place a securities purchase agreement for $25 million.

Although Lincoln Park has not had any legal issues that we are aware of, the list of other companies with whom they have had security purchase agreements should give any investor good reason for concern. One of these companies is Biocept, Inc. with whom Lincoln Park entered into a securities purchase agreement on September 2018 resulting in Lincoln Park having nearly 400,000 Biocept shares which were registered for sale on October 2019( 5 ). Biocept’s share price then proceeded to decline from $2.20 to under $0.80 on December 2018 only to then violently spike to more than $3.60 on January 2018 and crash again to less than $1.20 on February 2019.

Zosano Pharma Corp is another company that entered a securities purchase agreement with Lincoln Park. This agreement dates back to October 2017 and amounted $35 million ( 6 ). Zosano’s share price at the time was around $16, it currently trades at less than $1.50, seeing several spikes and crashes along the way. Other examples of dubious companies that have been involved with Lincoln Park includes Tonix Pharma, BioLargo Inc and Genocea Biosciences among others.

Thus, prospective investors should be very concerned by the fact that on October 31, 2015 ( 7 ) and on June 7, 2019, AVXL and Lincoln Park Capital entered into two separate securities purchase agreements for $50 million dollars ( 8 ). As explained Michael Goode on his blog, the October 2015 securities purchase agreement allowed Lincoln Park to purchase significantly discounted shares whenever AVXL needed some cash, allowing Lincoln Park to net profits on these shares on a regular basis ( 9 ) 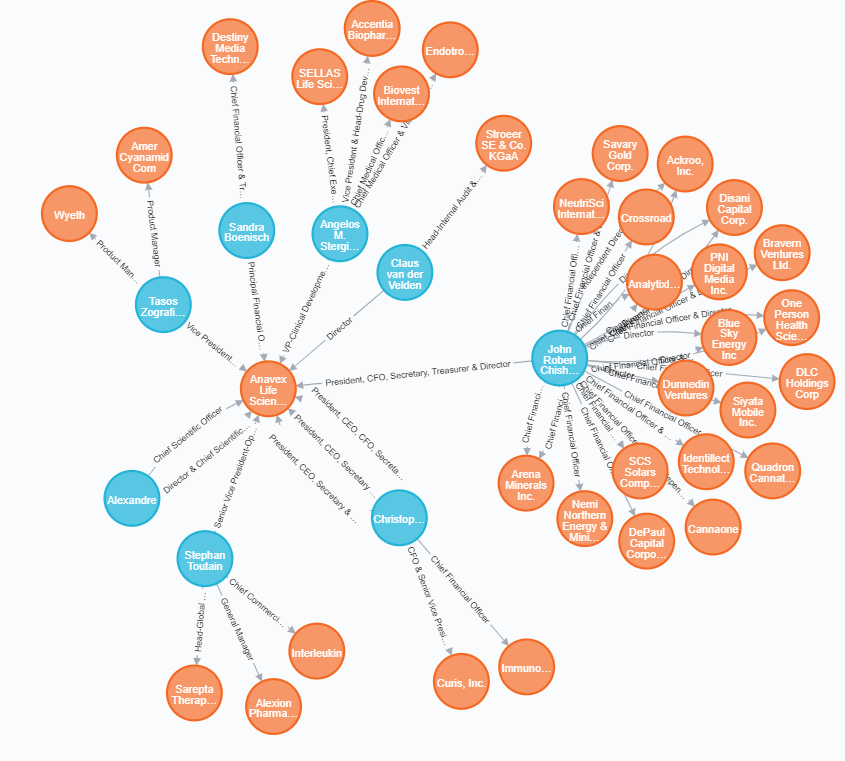 As previously mentioned, Anavex’s CFO is Sandra Boenish. She has held the role since October 2015, shortly after Anavex was uplisted to Nasdaq. A look at Ms. Boenish’s LinkedIn profile will reveal that between May 2013 and September 2015, she worked as VP finance for The Naked Brand Group. On September 2013 announced an $8.3 million security purchase agreement with none other than Lincoln Park ( 10 ). NAKD share price has since experienced a steady declineQuite the coincidence. For more information on the matter make sure to check out Buyer’s Strike article on the matter ( 11 ) 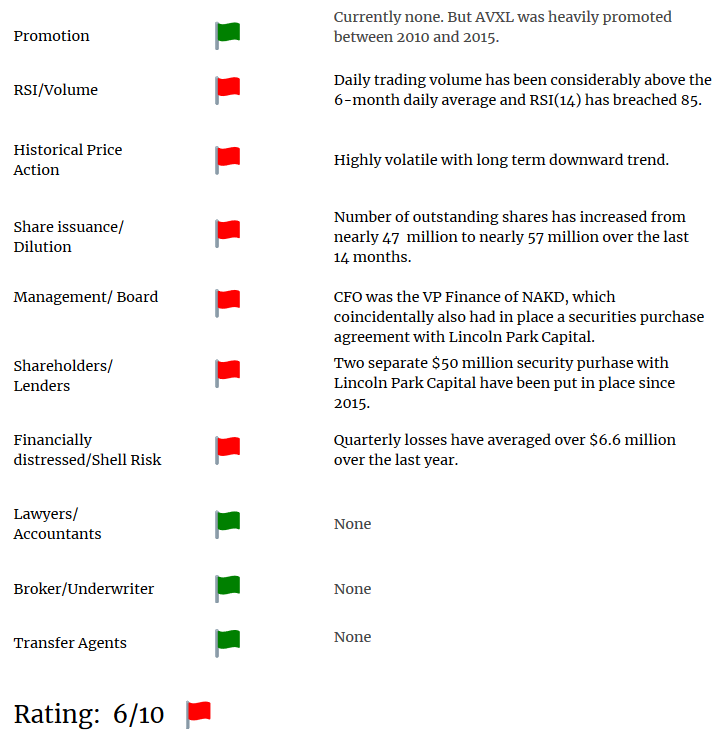