On February 6, 2020, we published our first short report on CYDY. In this report we highlighted many of the red flags this company raises such as: significant dilution during 2019; a promissory note issued to one of the most prolific so-called “vulture funds” currently operating among USA small/micro/nano caps; an underwriter with a less than stellar FINRA broker check record; terrible financials. At the time of publication, the price per share stood around $1.40, days later it dipped below $0.80. Like many other clinical stage biotechnology companies, the current pandemic has allowed CytoDyn’s share price to go on another run, this one even more ludicrous than the previous one as the company has made preposterous claims about the therapeutic potential of its lead drug for COVID-19 and has also been heavily featured on several websites that receive compensation in exchange for promoting companies. In this report we will be taking a closer look at the medical and promotional sides of CYDY’s recent run.

The last quarter has been yet another poor one as far as CYDY financial performance is concerned. Cash-in-hand has increased, however, this has likely been the result of share issuance as the number of outstanding shares increased from less than 400 million at the end of 2019 to more than 470 million currently. Furthermore, net losses reached a whopping $35 million last quarter a significant increase when compared to average quarterly losses during 2019 which amounted to $14.6 million. For more information on CYDY financials please have a look at our previous short report on this ticker.

Due to a disagreement with a scientific contributor we have removed his research from our report. Due to this modification our blockchain timestamp shows the content was modified on May 5, 2020. The blockchain timestamp will confirm this. The original full article can be found on archive websites but we cannot link it directly.

Like many tickers listed in the OTC that experience significant price runs, CYDY has been featured on several promotional websites over the last couple of months. The most notable one is emerginggrowth.com which has put out several articles on CYDY over the last couple of weeks ((1),(2),(3)), all of which clearly mention on a disclaimer at the bottom of the article that emerginggrowth.com was compensated by CYDY. 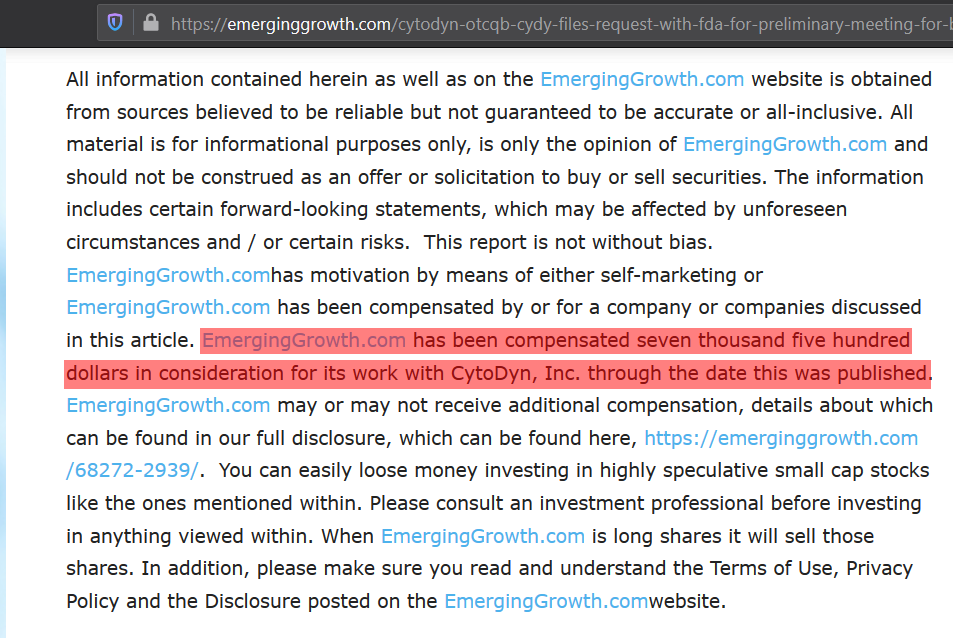 Emerginggrowth.com actually went as far as publishing a hit piece on Culper Research, a fund that published a report on CYDY that highlighted many of the red flags CYDY has raised over the last few years.

Another promotional outlet that has recently featured CYDY is proactiveinvestors.com ((1),(2),(3)). As its “terms” page states, some of the articles published on the website are indeed promotional, going as far as stating in its CYDY disclaimer that it has received $25,000 in compensation from CYDY. (Note: this disclaimer is region specific meaning that it is not visible from all IP addresses). 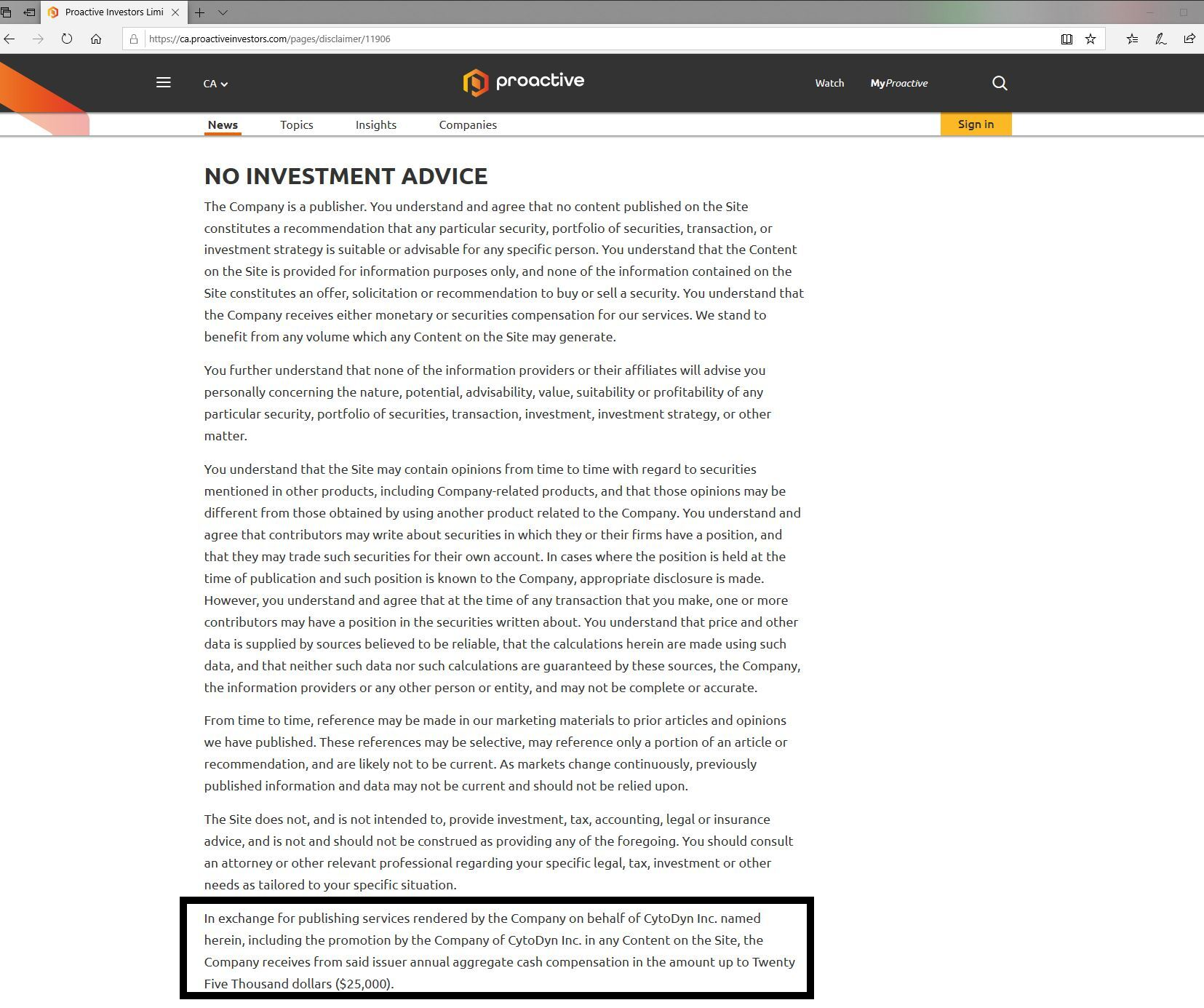 On February 10, 2020, The SEC’s Division of Corporate Finance wrote a letter to CYDY’s CFO, Mr. Craig S. Eastwood. In it, the SEC asked Mr. Eastwood to disclose information that he redacted from certain filing exhibits as he claimed that “the redacted information is not material and would cause competitive harm if publicly disclosed”. This wouldn’t usually raise too many eyebrows but in CYDY’s case is yet another addition to its track record of red flags. 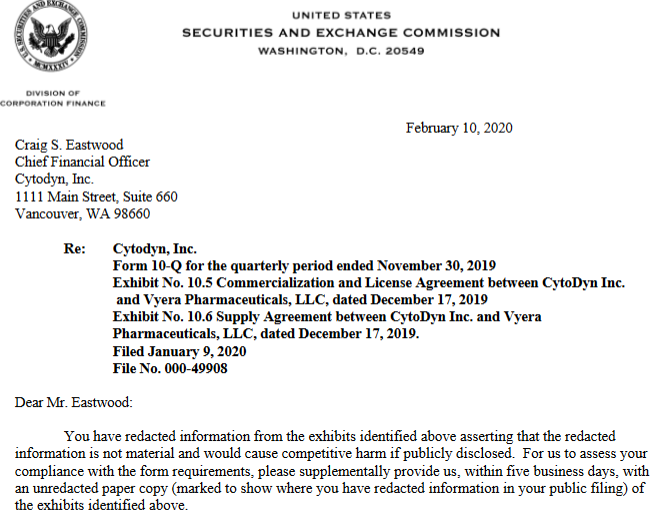 note: for full information on other red flags please read our previous short report on CYDY. 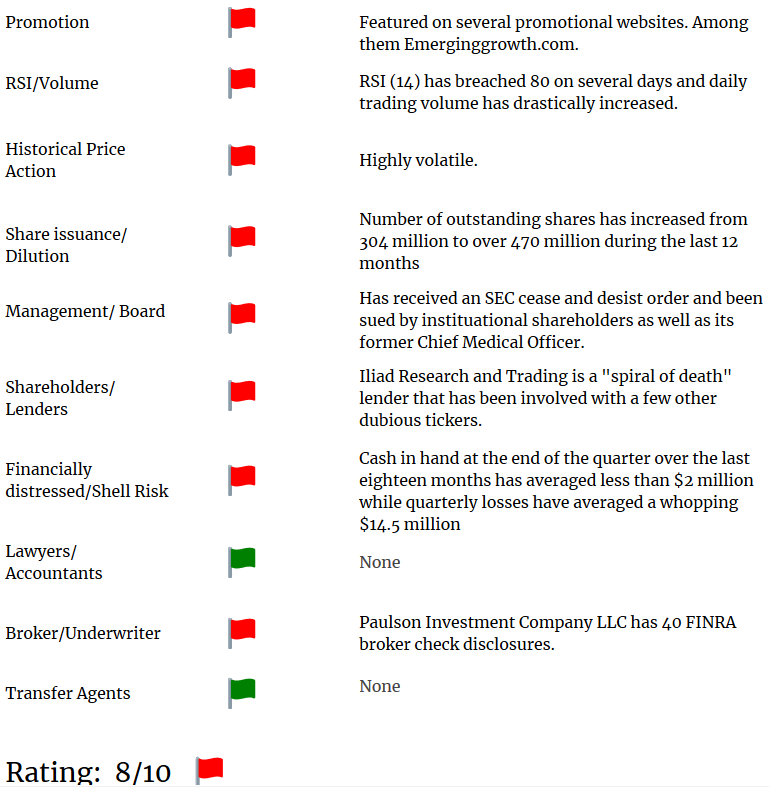 Our opinion on CYDY has not changed. It is a poor investment. Publications and studies clearly show inhibition of a single cytokine or related receptor is insufficient to ameliorate the disease progression of COVID-19 infection and related to complications such as cytokine storm. Meaning that its recent price run can likely be attributed to all the recent paid promotion. CYDY should refrain from touting Leronlimab as a pan-therapeutic drug for most of the dreadful diseases including recently-added (god-send!!!) COVID-19 indication which appears like a spurious tactic to inflate stock price.

Furthermore, CYDY raises plenty of other red flags as mentioned on our previous short report. Stay away from CYDY unless you are an experienced trader.

Please review the comments by Dr Yang, distinguished HIV researcher and Lead on Gilead’s Remdesivir Covid19 trials. Clearly he believes CYDY’s PRO140/Leronlimab has potential as it was used after two other drugs failed.

https://www.nbclosangeles.com/news/coronavirus/southern-californias-race-for-a-covid-19-cure-is-moving-at-lightning-speed/2345620/
Yang said the results are so far “exciting” among the handful of patients that have received Leronlimab. “We got something that looks really good, safety wise,” Yang said.