In our fifth Investor Warning focusing on third-parties, we will be taking a closer look at CVI Investments. This is a name many penny stock traders are likely well acquainted with as it often pops-up in the ownership filings of companies that tend to enjoy remarkable and often times short-lived parabolic runs. We must emphasise that this article is no way suggesting CVI Investments has broken any laws, regulations, duties or contractual obligations, we are simply highlighting how this fund finds itself repeatedly involved with publicly traded companies that exhibit highly unusual yet somewhat predictable share price behaviour.

In order to illustrate CVI Investments’ investments we will first take a closer look at three of the companies it has been involved with over the last couple of years that have also recently exhibited unusual price behaviour. Later on, we will give an overview of the rates of return generated by 41 different companies since CVI Investments purchased a stake in them. Please note that we will be comparing historical share prices to those of March 4, 2020, as this date precedes the “Great Corona Crash”. SAVA has seen an increase in its share price since CVI investments acquired a stake in August 2018 (2). SAVA was formerly known as Pain Therapeutics (PTIE), and it is a company that is no stranger to controversy. Its lead drug candidate was known as Remoxy, which was in development for many years (nearly a decade and a half) and was subject to over 50 studies at a cost in excess of $100 million. Despite its clinical trials being “successful” the FDA did not approve it. This infuriated CEO and founder Remi Barbier who went on to accuse the FDA of making “math errors, material mistakes or misrepresentations” (3).

However, there is a bit more colour to PTIE/SAVA’s history. Around mid-2015 a class action lawsuit was filed against the company. The plaintiffs in the lawsuit claimed that “PTI(E) and the individual defendants caused shares in PTI(E) to trade at an artificially high price by concealing certain information from the public regarding the REMOXY FDA-approval process. Specifically, Plaintiff claims although Defendants knew they had failed to resolve problems with REMOXY’s stability that caused the FDA to reject the first REMOXY New Drug Application (NDA), Defendants led the public to believe those problems had been resolved while reapplying for FDA approval. Plaintiff further alleges despite knowing the second NDA would also be rejected, PTI(E) rewarded the individual defendants with unjustifiable compensation packages it asked the shareholders to approve”. Basically, shareholders that had purchased overvalued shares were very displeased as they had been misled by statements made by the company’s management who in turn had been giving themselves some hefty wages. The lawsuit was settled out of court when the company compensated shareholder with the sum of $8.5 million (4) As we can see PTIE/SAVA has had a troubled recent history, but what about its long term history? We believe the share price chart since its inception is rather telling. CVI Investments first acquired a stake CODX in early 2018 (6), which had been entirely sold off by the end of 2019 (7). CODX has exhibited highly unusual behaviour in recent months and raises several red flags. The most concerning of these red flags being paid promotion. On January 10, 2020, well known promoters such as OTCtipReporter, Buzzstocks.com, James Connelly (aka Penny Stock Prophet), HotOTC, BullRally and other, sent out premarket alerts promoting CODX. 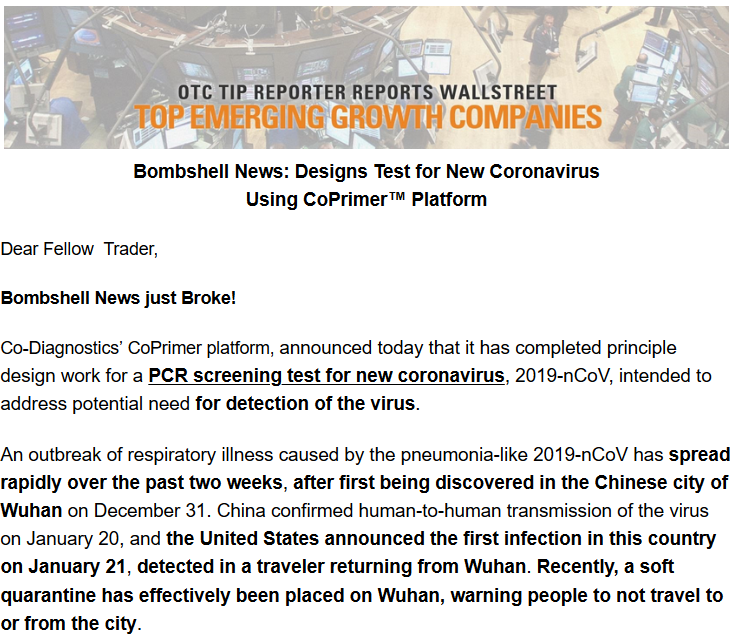 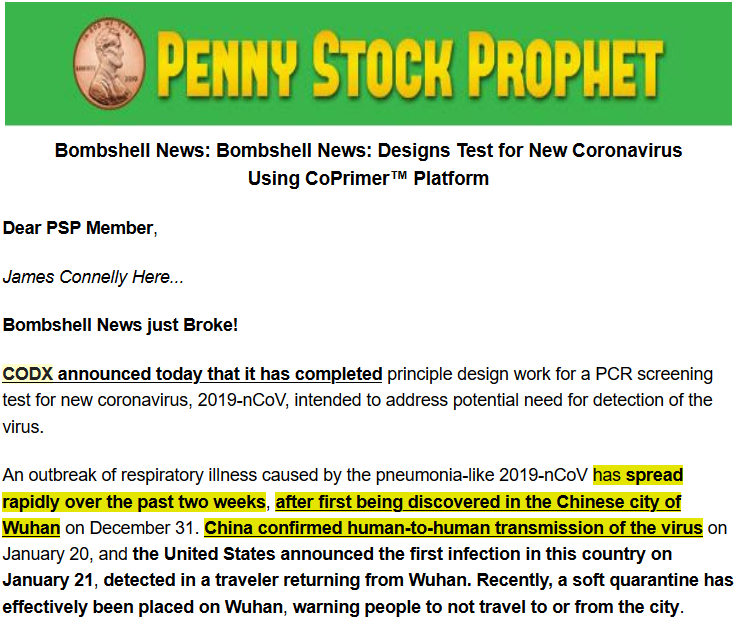 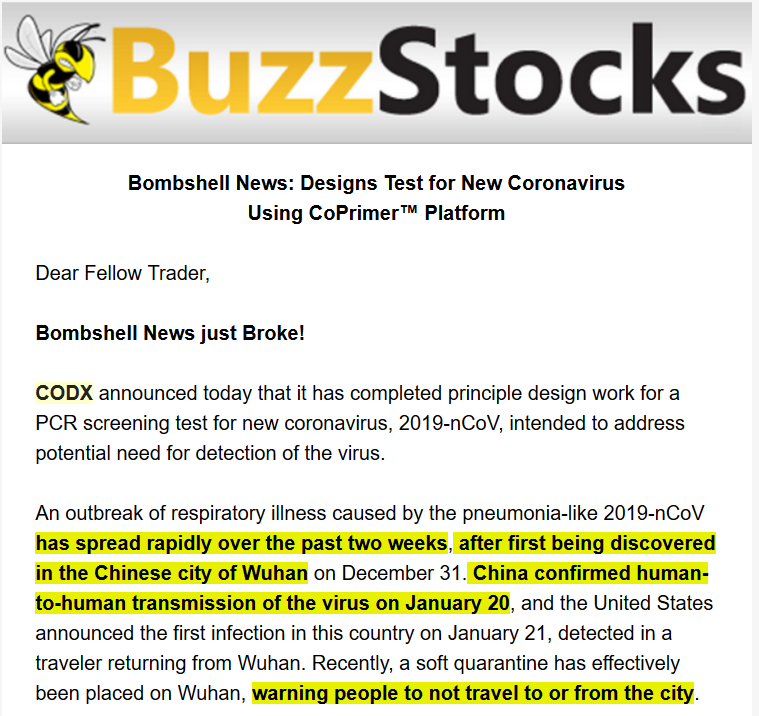 CODX’s transfer agent, VStock transfer agent, also gives reason for concern. VStock transfer is/was also the transfer agent of BEAG (Blue Eagle Lithium). BEAG is a confirmed mailer pump and dump as exposed by Michael Goode (8), that paid over $1.3 million dollar for a landing page. It ended up getting into serious trouble with the SEC, who went to suspend its trading on July 1, 2019 because of lack of accuracy of publicly available information and unusual unexplained market activity  (9). BEAG now dwells in the grey market (also known as the OTC cemetery) where it currently trades at less than $0.05 after having reached $3.50 pre SEC suspension. 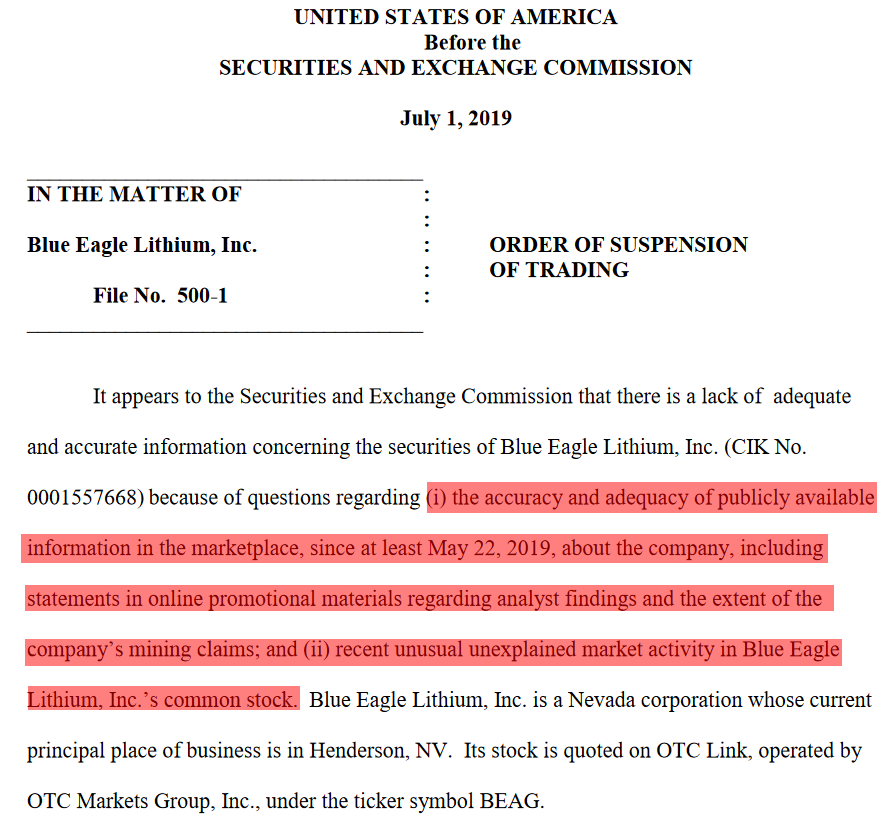 Furthermore, CODX has also been recently involved with Sabby Management, another so-called “infamous” entity among small publicly traded companies. Sabby Management is no stranger to controversy as evidenced by previous securities laws violations, and the atrocious performance of the vast majority of its “investments” over the last two years. We covered Sabby Management in a previous report, so feel free to have a look at said report for more details. 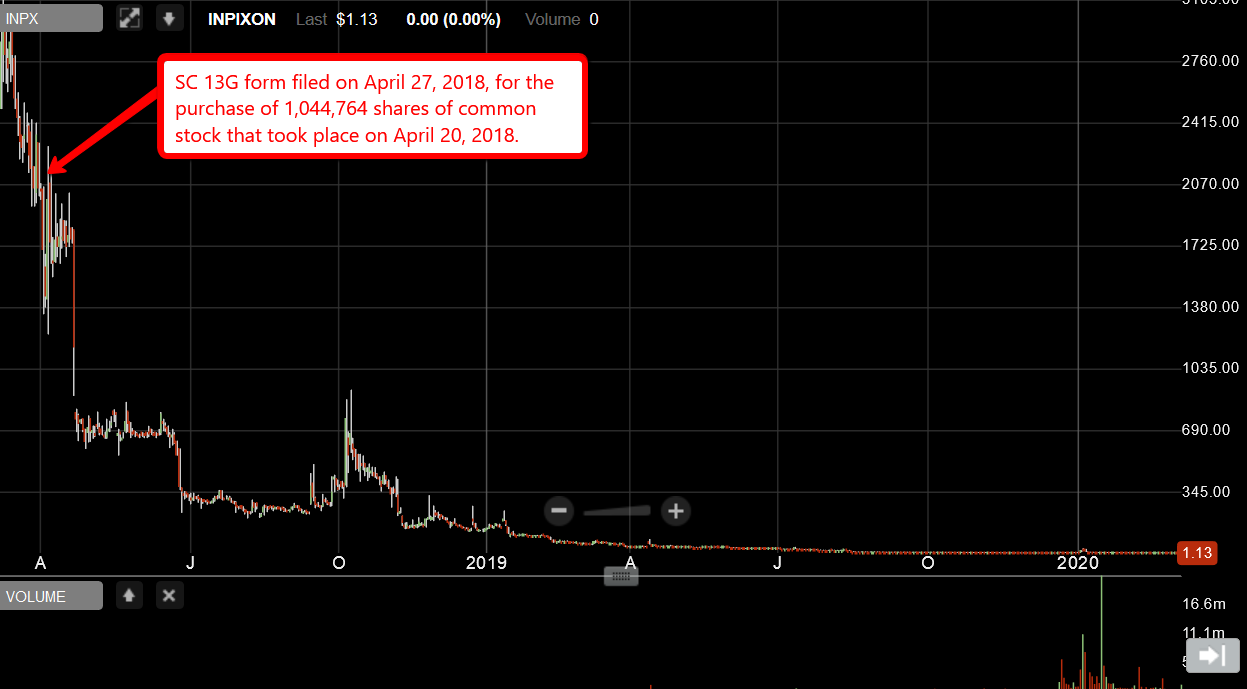 We covered INPX on January 6, 2020. CVI Investment filed a Schedule 13G form on April, 2018 (10). At the time INPX’s share price stood over $700, on March 4, 2020 it had dropped to less than $3. This company raised many red flags namely: an underwriter with links to an alleged pump and dump ring and a debt agreement with Iliad Research and Trading that resulted in extreme levels of dilution. We have previously covered Iliad Research and Trading and highlighted how since 2016 it has been involved with approximately 28 different companies. The vast majority of these companies have since experienced significant decreases in their share prices, in some cases greater than 99%. The average annualised rate of return for 27 of these 28 companies is a horrific -49%. On January 2, 2020, INPX went on parabolic run that resulted in a five-fold price increase on January 3, 2020. The next trading day, January 6, 2020, a 1-to-45 reverse split was announced and its share price collapsed just as quickly as it rose (11).

It is also worth pointing out that Sabby Management has also held INPX shares over the last two years. As already mentioned, Sabby Management is a so-called “infamous “ fund with a few red flags that have been covered in our report. 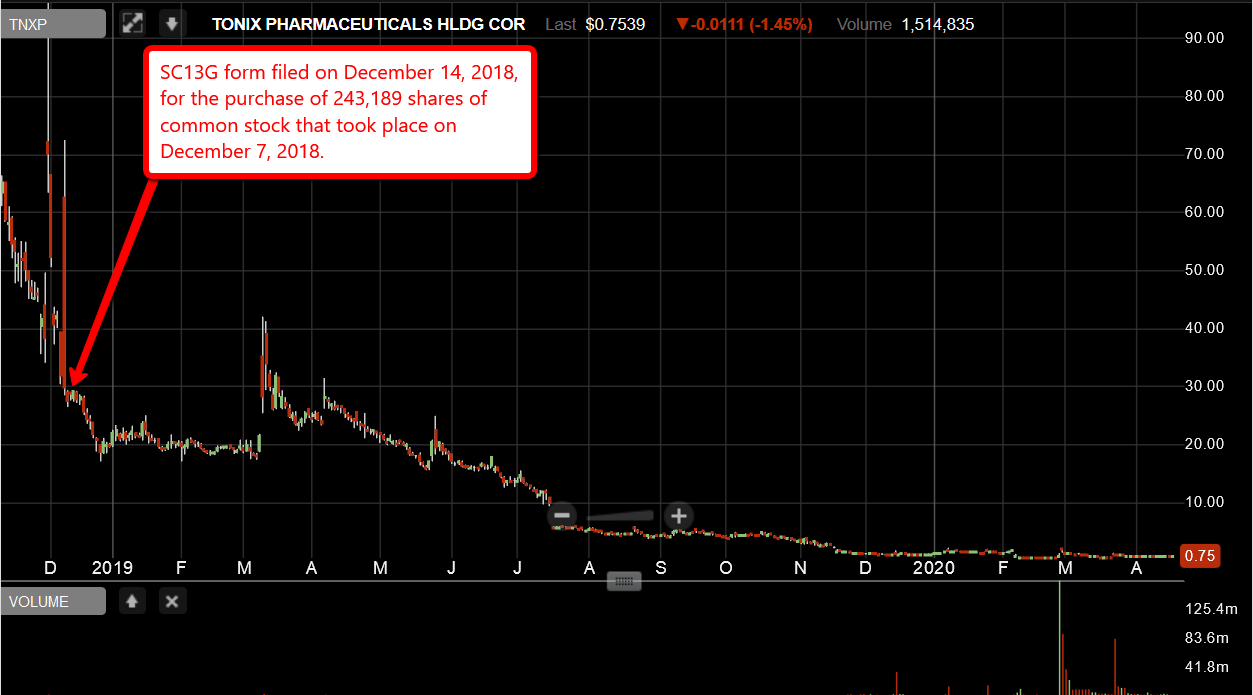 CVI Investments acquired stake in TNXP in December 2018 (12). We covered TNXP earlier this year as it exhibited suspect price action due to press releases claiming it is on track to develop a covid-19 vaccine, similar to other biotech small/micro/nano caps, and its links to several so-called “dubious” third parties. One of these entities is Iroquois Capital Management LLC (13). According to an article published on August 16, 2018 by Teri Buhl (14), Richard K. Abbe, a co-founder of Iroquois Capital was accused of a fraudulent scheme to trick the founders of an airport spa business, XpresSpa, into a merger with a public Microcap company that resulted in a massive loss of their business investment. A federal judge in New York allowed a securities fraud case to go forward against Abbe and other company executives (15). 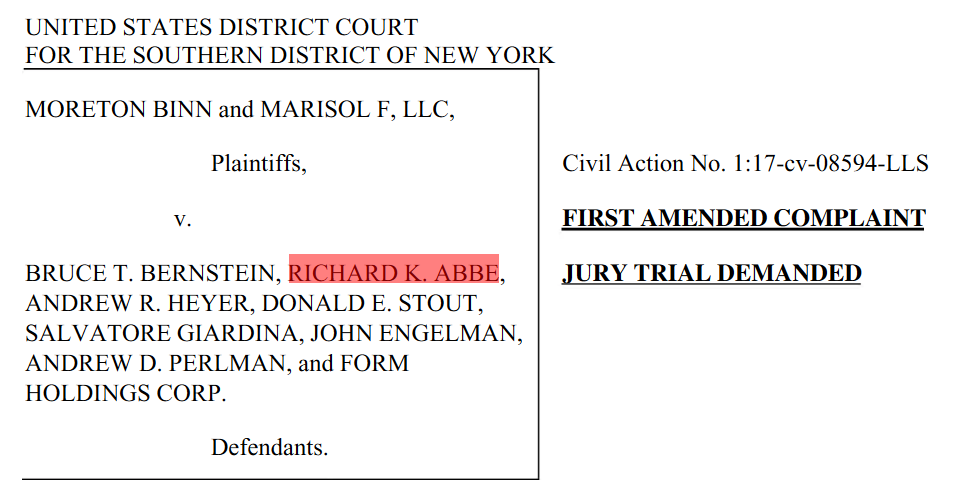 Another dubious institutional shareholder involved with TNXP is Lincoln Park Capital. In August 2019, TNXP and Lincoln Park entered into a purchase agreement for up to $15 million worth of common stock (16). Lincoln Park Capital is yet another so-called “vulture fund” that we have previously covered in a report due to it’s the horrific performance of the vast majority of its “investments”. TNXP got first involved with Lincoln Park in September 2017, when it entered into a securities purchase agreement for up to $15 million (17). At the time its share price stood at $431… on March 4, 2020 it stood at little above $1. The company was in a difficult financial situation which went on to become even more so on July 27 2018, when its share price plummeted 70% as a result of the failure of the Phase 3 study of its lead product candidate (18). Since then things have gone from bad to worse with its share price continuing to go southward and its financials worsening as attested by the fact that it entered another securities purchase agreement for up to $15 million on October 18, 2018 (19)…. And another one for up to an additional $15 million on August 20, 2019 (20). Some of the terms are shown below: 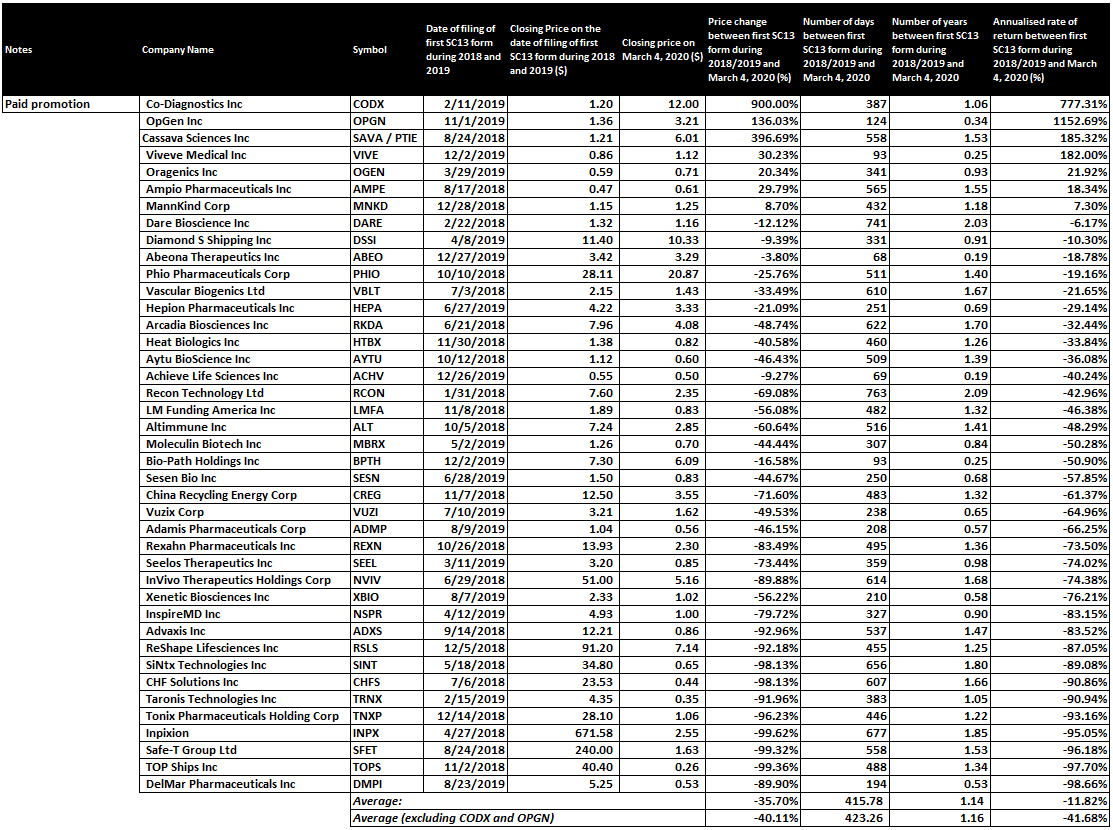 We thus advise investors to diligently read filings and be careful when dealing with any company in which CVI Investments has or has had a stake in. Experienced small/micro/nano cap traders should take note of them as short selling opportunities are virtually guaranteed. And beginner investors should treat them with extreme caution.

We also welcome our readers who have invested in or traded the above listed companies to please come forward and share their experiences. This will prove very valuable as a warning to current and prospective investors/traders about the perils of getting involved with companies that have links to CVI Investments.