Over the last two to three weeks Workhorse Group Inc’s share price has enjoyed the type of parabolic run that has become a somewhat common occurrence in the current volatile market conditions. This run has seen WKHS’s share price increase from under $3.00 at the beginning if June to yesterday’s intra day high of $20.00 and daily trading volume exceed 100 million shares traded on more than one occasion. Given this highly unusual activity Utopia Capital Research (UCR) decided to take a closer look at WKHS to understand how it could possibly appeal so much to so many of the new traders/investors that have flooded equity markets recently. Several red flags were found that were deemed serious enough to be highlighted to the general public. These red flags include: a concerning financial situation more specifically rapidly increasing liabilities, potential and substantial further dilution as result of the nature of recent financing and shareholders/creditors with an “interesting” recent track record.

WKHS describes itself as: “a technology company focused on providing sustainable and cost-effective solutions to the commercial transportation sector. As an American manufacturer, we design and build high performance electric vehicles and aircraft that make movement of people and goods more efficient and less harmful to the environment. As part of our solution, we also develop cloud-based, real-time telematics performance monitoring systems that enable fleet operators to optimize energy and route efficiency. We are currently focused on our core competency of bringing the C-Series electric delivery truck to market and fulfilling our existing backlog of orders.” The current parabolic run the company is enjoying has coincided with a considerable increase in its PR output and media coverage which make reference to the company’s 10% stake in Lordstown Motors (a small EV pick up manufacturer), a visit of Vice President Mike Pence and its inclusion in the Russell 3000 index. Not sure how such news warrants such a price run but this is something many new traders will clearly disagree with as indicated by the fact that it is the eighth stock to gain the most popularity among Robinhood over the last month.

WKHS financials are “less than brilliant” considering its market cap stood above $1 billion yesterday. It is clear the company has been able to raise enough capital to stay afloat despite averaging over $6.4 million losses over the last five quarters. The company has managed to keep dilution under relative control, however the number of outstanding shares has managed to increase by more than 12% in a year, from 61.5 million at the end of Q1 2019 to more 69.4 million by the end of Q1 2020 and it currently stand above 79 million.

What is more concerning is the rate at which the company’s total liabilities have increased, from less than $23 million by the end of Q1 2019 to more than $47 million by the end of 2019. The more than doubling of this figure during 2019 should give investors some reason for concern as the company’s net sales give no indication that this debt will start being repaid any time soon without diluting, as net sales have averaged a paltry $92,000 per quarter since 2019. As we will see WKHS debt structure and financing pose a serious dilutive “threat” to current shareholders as a lot of it is convertible and share price dependent, and is being issued in order to service previous debt obligations.

A quick look at WKHS’s latest 10-Q will show that the company issued a $41 million convertible note on December 9, 2019. During the three months ended March 31, 2020, $4.5 million par value of the Convertible Note was converted to 1,546,889 shares, a clear indication that until very recently the company was willing to sell shares for as little as $2.91 in order to service debt obligations it simply cannot repay at the present time given the utter lack of sufficient revenue.

There is further evidence of likely dilution on this very same 10-Q, as on December 31, 2018,  the company entered into a Credit Agreement, with Marathon Asset Management, LP. In conjunction with entering into the Credit Agreement, the Company issued Common Stock Purchase Warrants  to purchase 8,053,390 shares of common stock at an exercise price of $1.25 per share. The Credit Agreement was paid in 2019, but the Initial Warrants are still outstanding. It is very likely that these warrants have already been exercised as sold given the low exercise price meaning that further dilution should come as no surprise to current shareholders.

The clearest indicator that the company will need a lot more money over the coming years is the S3 form for $250 million that was filed at the end of April 2020. The “use of proceeds” section clearly states that “ (the company) intend(s) to use the net proceeds from the sale of our securities offered by this prospectus for general corporate purposes, which may include, but not be limited to, working capital, capital expenditures, acquisitions, refinancing of indebtedness and repurchases or redemptions of securities”, meaning that part of this money will likely go towards servicing existing debt. This should be concerning for current shareholders as it means that the company is effectively issuing new debt to pay existing debt as the recently issued. This is evident as the $4.5 million  dollars worth of the previously mentioned December 9, 2019 convertible note were converted into 1,546,889 shares of common stock price at $2.91 per share that were registered for sale on this very form, and the $70 million financing that was announced this week is also backed by convertibles/shares that are registered in this very same S3 form.

This threat of dilution is further reinforced by the fact that according to another S3 filed in August 2019 registered for sale over 15 million shares of common stock that were issued as a result of many creditors choosing to exercise warrants and covert preferred stock at price around $1.50 per share.

As we can see a significant amount of the dilution the company has experienced over the last few months has likely come as a result of creditors opting to convert debt into shares, which should be particularly concerning when one bears in mind that the $70 financing deal the company recently entered is with an existing creditor, the same creditor who was issued a $41 million convertible note by the company in December 2019 and who has already converted $4.5 million of this debt. This creditor goes by the name of HT Investments MA LLC aka Hight Trail Capital.

As previously mentioned HT Investments MA LLC aka Hight Trail Capital has been issued with over $110 million worth of convertible notes. It would thus appear that HT Investments has a lot of faith in the company. However, this claim can be questioned when one takes a look at other similar deals recently put in place between HT Investments and other publicly traded companies and the subsequent price action they have gone on to experience.

Lets take for example, Pareteum Corp. (Nasdaq: TEUM). On June 8, 2020, TEUM and HT Investments entered into a Senior Secured Convertible Note agreement for $17.5 million. The agreement also included 15,000,000 shares of the Company’s common stock at an exercise price of $0.58. Over the next trading days TEUM’s share price increased by over 70%, from $0.66 to more than $1.10, and trading volume also increased significantly, only for both to promptly fade away over the coming days.

Another recent example is Tellurian Inc (Nasdaq: TELL). On April 28, 2020. TELL and HT Investments entered into an agreement for  $56 million of zero coupon, unsecured notes for gross proceeds of $50 million and warrants to purchase up to 20 million shares of common stock. At the time TELL’s share price stood around $1.50, similar to the $1.54 conversion price quoted for the warrants. Over the coming month TELL’s share price steadily declined getting very close to $1.00.

It thus appears that WKHS’s most generous creditor has a recent track record of entering dilutive financing agreements with other publicly traded companies.

Another interesting detail found while rummaging through WKHS’s filings is that it entered into a securities purchase agreement in December 2017 with Hudson Bay Capital Management, a multi billion dollar fund that has a penchant for getting involved with distressed small caps that raise several red flags and are characterised by prolonged downwards trends as far as their share price is concerned. 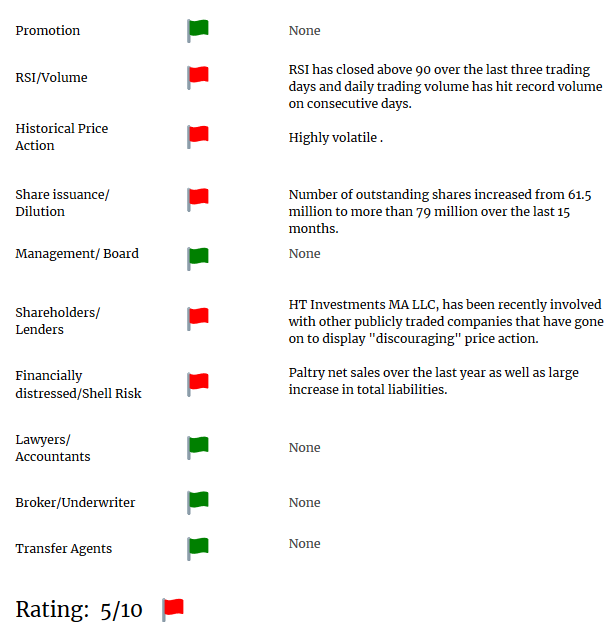 In UCR’s opinion, WKHS’s financing is quite concerning as it will be very dilutive unless the company manages to significantly increase revenue, which seems unlikely in the near future. Add to this the current hype which seems to be mostly driven by a combination of recent and heavy PR output in conjunction with the markedly volatile current nature of the USA equity markets that has come about largely as a result of the massive influx of inexperienced newbie traders (e.g. Robinhooders) and the “feel good” factor generated by the Federal Reserve’s decision to expand monetary policy to unprecedented levels in order to “mitigate” the economic effects of the current pandemic. UCR thus believes that WKHS currently has considerable downside potential as its current share price can be mostly predicated on anything of substance.