A pharmaceutical company based in Boston, it has not filed any SEC documents in over 13 years and their shares have been recently given caveat emptor by otcmarkets.com. The most likely reasons for being awarded this badge of honour is its recent and unusual price activity, which saw a 1200% increase between June 21st 2019 and July 9th 2019 (from $0.15 to nearly $2.00) and their use of a landing page. It has since been taken down but screenshots serve as proof of its existence. 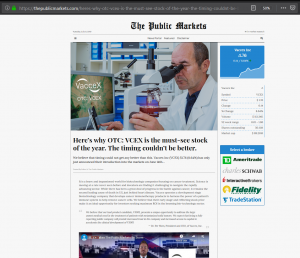 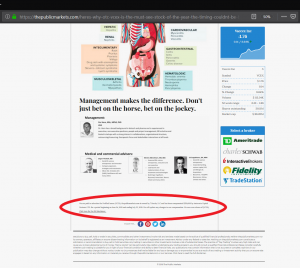 A close look at the final screenshot reveals that Antevorta Capital Partners paid $150,000 for this landing page. Antevorta hold/held around 4 million shares of common stock and hold over $30,000 in convertible notes (1).

Last but not least, VCEX’s lawyer, Morgan Petitti (2), has been sued for fraud by the SEC in 2011 because of his involvement with Petroleum Unlimited LLC (3).