Like most of the tickers featured in our short reports U.S Gold Corp. has exhibited a combination of a drastic price increase (over a two-fold price increase over the last 2 days) and trading volume substantially above the 30-day daily average (770 thousand vs 33 thousand). One might argue that this is not a particularly strange occurrence in the world of nano caps in light of the increased demand for gold stemming from the “Great Corona Crash”, but upon further inspection we have found enough red flags to bring them to the public’s attention. USAU exhibits a combination of significant dilution over the last year, links to an alleged pump and dump ring currently under SEC investigation, links to a former Interior Secretary who resigned amid multiple ethics investigations and recent paid promotion.

U.S. Gold Corp. describes itself as “an exploration company that owns certain mining leases and other mineral rights comprising the Copper King Project in Wyoming and the Keystone and Gold Bar North Projects in Nevada. None of our properties contain any proven and probable reserves under SEC Industry Guide 7, and all of our activities on all of our properties are exploratory in nature.”. Formerly known as Dataram Corporation (the “Company”), was incorporated under the laws of the State of Nevada and was originally incorporated in the State of New Jersey in 1967. Effective June 26, 2017, the Company changed its legal name to U.S. Gold Corp. from Dataram Corporation. On May 23, 2017, the Company merged with Gold King Corp. (“Gold King”), in a transaction treated as a reverse acquisition and recapitalization, and the business of Gold King became the business of the Company.

USAU’s financials are far from pretty. Despite liabilities being seemingly under control, cash in hand has been decreasing at a significant rate over the last 8 months, net losses have averaged $1.5 million over the last three quarters and common stock has increased by 23% between April 30, 2019 and January 31, 2020. It is also worth highlighting that the company incurred net losses over $8 million during the year ended on April 30, 2019.

Judging by the way the company describes its operations and it financial troubles it seems that it will have great difficulty turning things around.

USAU has been surrounded by a fair amount of controversy since its inception through a reverse merger involving Dataram Corp. back in June 2017. At the time Dataram Corp. was a failing computer memory products manufacturer listed on the Nasdaq. The merger was allegedly engineered by none other than Barry C. Honig, who has garnered a so-called “notorious” reputation due to a series of SEC investigations accusing him of playing a pivotal role in an alleged pump and dump ring involving small/micro/nano caps (1). 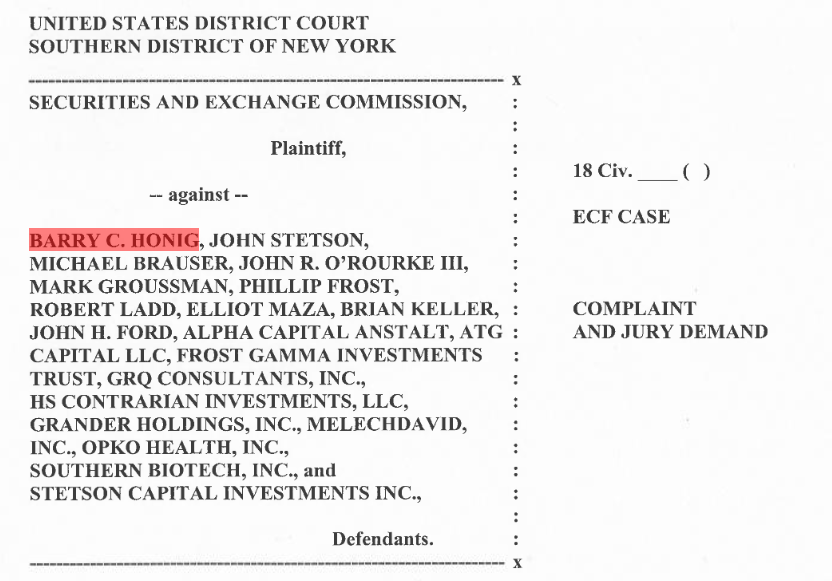 The above SEC complaint alleges that from 2013 to 2018, a “group of prolific South Florida-based microcap fraudsters led by Barry Honig manipulated the share price of the stock of three companies in classic pump-and-dump schemes”. These schemes generated over “$27 million from unlawful stock sales and caused significant harm to retail investors who were left holding virtually worthless stock”.

As we can see Dataram Corp.’s and U.S Gold Corp.’s reverse merger took place during the time period the SEC claims Barry C. Honig engaged in stock fraud. Furthermore, it was uncovered by Sharesleuth that Barry C. Honig and several of his associates “had acquired a large stake in Dataram prior to the deal, and that one of them – John R. Stetson – also managed a limited liability company that was U.S. Gold’s principal shareholder. Their role on both sides of the transaction was not disclosed in SEC filings, nor was their sale of millions of dollars in stock in the months before and after the merger” (2).

Sharesleuth’s article also goes into detail about how Honig acquired a significant stake in Dataram in 2015, bought common stock at favourable/discounted prices, became a company director which allowed him to improve the conversion terms of preferred stock on two occasions, arranged for the reverse merger, converted most the preferred shares to common stock without filing any amended SEC disclosure forms around the time the reverse merger was announced and then someone paid tout sites to promote Dataram’s stock. Later on, Honig and his associates allegedly unloaded large amounts of newly issued common stock through the conversion of preferred stock. After the reverse merger was completed, more preferred shares were converted and a new round of paid touting took place.

This what Dataram/U.S Gold Corp’s price looks like since 2015: 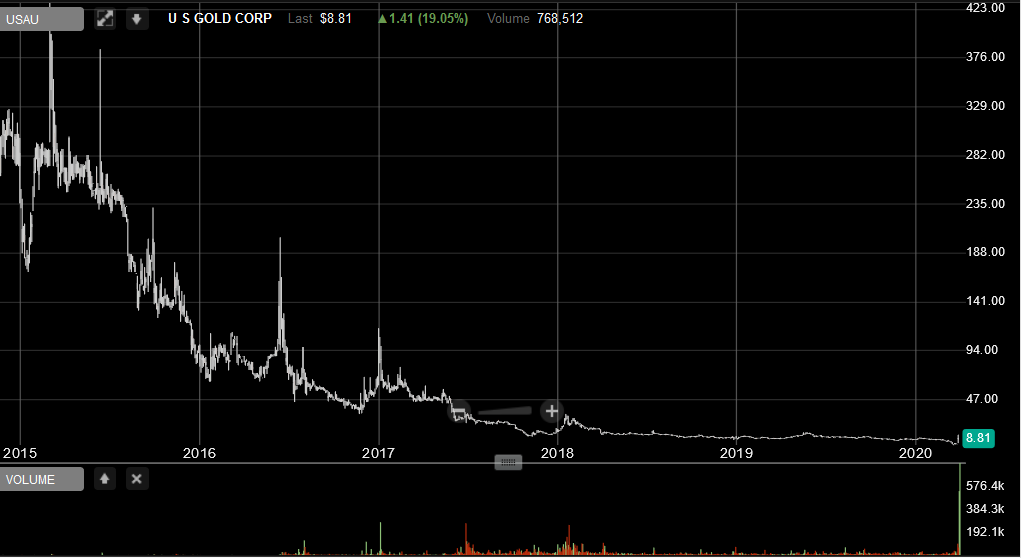 The above chart certainly fits the narrative that extreme levels of dilution as a result of share conversions are likely the main reason for the collapse of the share price.

It is also worth pointing out that former Interior Secretary Ryan K. Zinke who resigned in 2018 amid multiple ethics investigations (3) was appointed to USAU’s board of directors on April 16, 2019 (4). 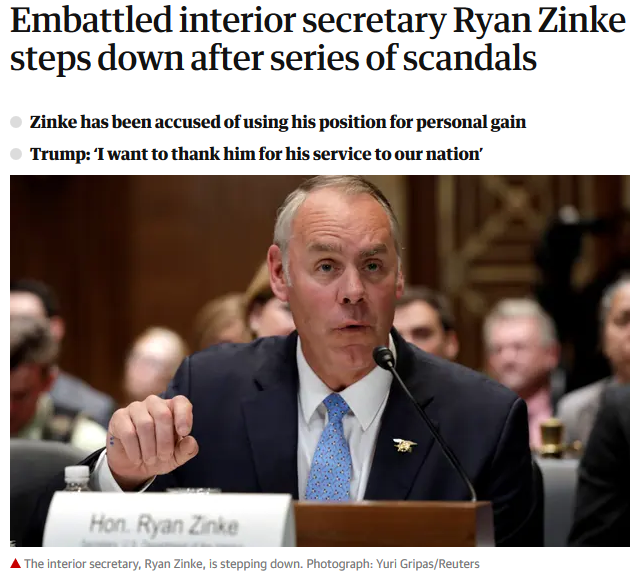 Not the end of it… more dilution likely incoming:

Given the above, prospective shareholders should be aware that on June 19, 2019, USAU entered into a “securities purchase agreement with certain purchasers relating to the offer and sale of 1,250 Series F Preferred units, each Unit consisting of one (1) share of 0% Series F Preferred Stock and 878 Class X Warrants. Each Unit will be sold for its stated value of $2,000. Each share of Preferred Stock, at the option of the holder at any time, may be converted into the number of shares of common stock of the Company determined by dividing the $2,000 stated value per share of the Preferred Stock by a conversion price of $1.14 per share (initially approximately 2,193,750 shares of common stock)” (5).

It is likely that this agreement partly accounts for the increase in USAU’s number of outstanding shares (common stock) from around 20 million in the first half of 2019 to over 24 million in January 2020, as whoever purchased the preferred shares was able to convert them into common stock for as little as $1.14 per share. Is history repeating itself?

Not the end of it… more promotion:

The biggest red flag USAU currently raises is paid promotion. Yesterday an email pump newsletter was sent out by AwesomeStocks.com when market opened: 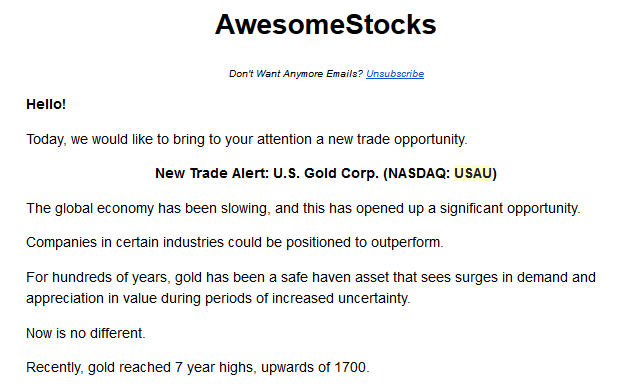 The disclaimer states that AwesomeStocks.com was compensated $15,000 for disseminating the newsletter: 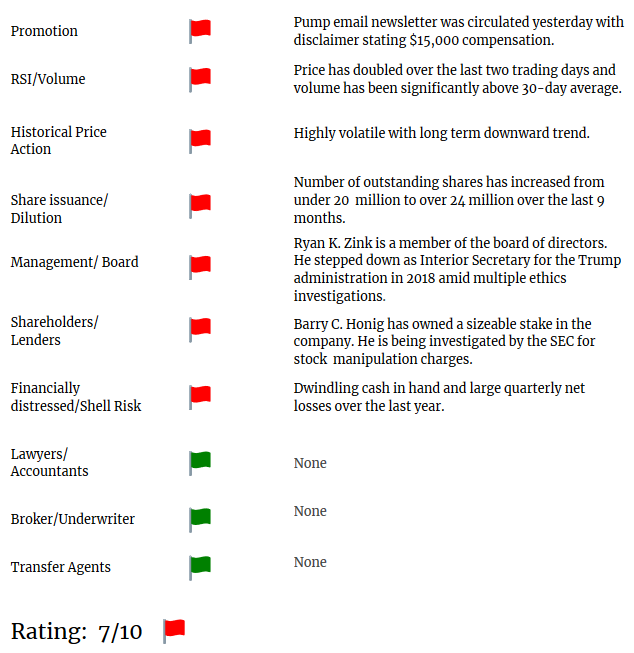 USAU is certainly not a good investment. It is a financially distressed company that has been involved with individuals currently being investigated by the SEC for stock manipulation, a member of its board of directors had to step down as Interior Secretary for the Trump administration amid multiple ethics investigations, has a very dilutive stock purchase agreement since 2019 and has been subject to paid promotion in recent days. Stay away unless you have extensive experience trading this type of tickers.