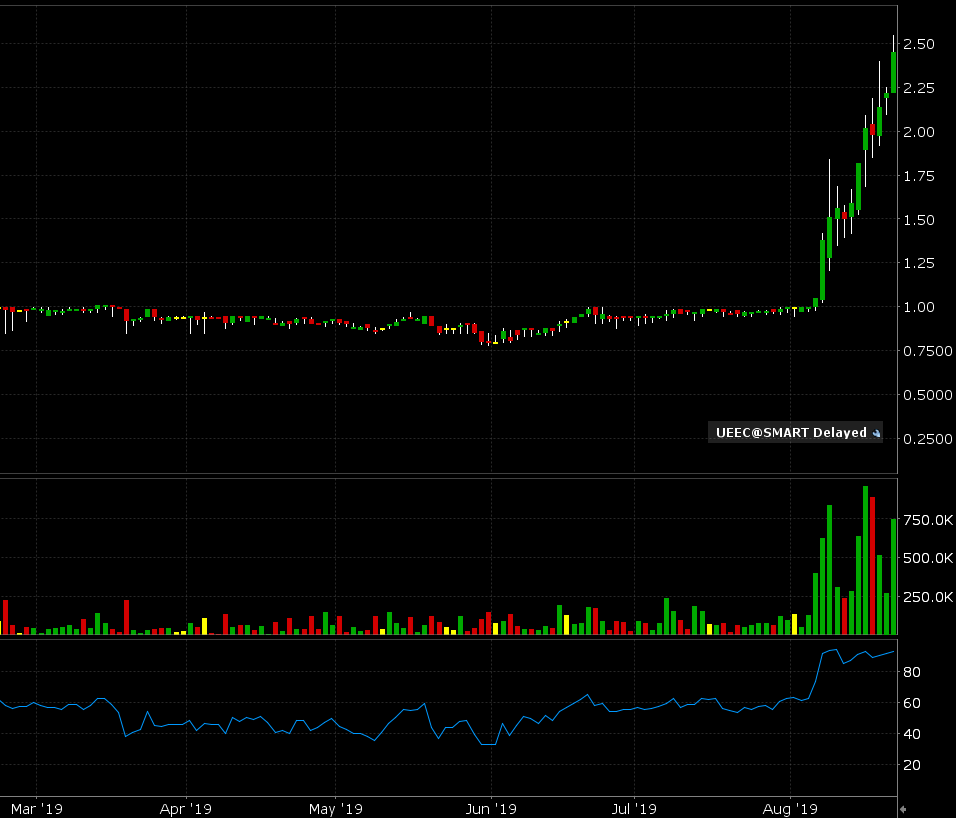 A healthcare product manufacturer from Nevada, UEEC is in the business of producing a “patented hemostatic gauze for the healthcare and wound care sectors. The product, HemoStyp®, is derived from all natural, regenerated oxidized cellulose and designed to absorb exudate/drainage from superficial wounds and help control bleeding”. A noble cause no doubt, maybe this could explain the 120% share price increase over the last couple of weeks resulting in a market valuation well over $400 million. However, a quick look at their latest 10Q makes one wonder what could possibly be behind this recent occurrence. UEEC currently holds just over $500,000 in cash:

Worries about the company’s sustainability are further reinforced when reading the “Going concern” section of the latest quarterly report (1):

This would certainly be concerning for investors, particularly if one bares in mind the company’s recent share price increase.

The Hemostyp has simply never quite taken off. And despite attempts to get it Class III approved for surgical markets by the FDA, which could represent a significant revenue stream, things are yet to change and one could hardly be blamed for believing the company’s financials will remain far from optimal in the future (1).

Something that stands out from looking at the company’s latest quarterly report, other than the financials, are the management’s legal disputes over the last few years. In 2017, former marketing vice president Steven Safran, filed a complaint for breach of contract, fraud and misrepresentation against CEO Douglas Beplate. Mr. Safran claimed he is owed over $240,000 in unpaid wages and loans.  The matter is yet to be fully settled as Safran has requested a jury trial while Beplate has asked the court to dismiss the case. Another individual who has demanded a jury trial over contractual disputes with Mr. Beplate and UEEC is former CEO Philip Foreman. Mr. Foreman is seeking over $2,000,000 in money damages and over $10,000,00 in punitive damages. It appears the current CEO is not the most adept at keeping internal disagreements out of the courtroom. Unfortunately, disputes are not limited to former board members. On the fourth quarter of 2018 the Maxim Group LLC filed a complaint with FINRA seeking the release of a restrictive legend from a company stock certificate in the amount of 500,000 shares. In response the company decided to lock horns and filed an affirmative defense and a few counterclaims. Last but not least, in 2018 JEC Consulting, a third-party plaintiff in a lawsuit between FSR Inc and Korsair Holdings involving over 3,000,000 company shares, filed a third-party complaint against the company alleging that the company and Mr. Beplate refused to have the Rule 144 restrictive legend removed from the Korsair certificate held by JEC, fraudulently depriving JEC of the ability to sell the shares in the open market. All these legal ordeals are far from reassuring and raise questions about the current management, the CEO in particular (1).

A closer look at the CEO, however, raises further questions about the company’s prospects. Not much information about this individual could be gleaned (lawsuits aside) but what we have been able to obtain is not particularly reassuring. Between 1996 and 2006, Mr. Beplate was the CEO of a now struggling company formerly known Emergency Filtration Products (EMFP) (2). As the name suggests EMFP was in the business of manufacturing various filtration products, most notably Nanomask/RespAide and Superstat. The Nanomask/Respaide was their first product, it consisted of a filtration mask which could be used in medical and other settings as a safety measure. Later on, they went on to develop Superstat, which according to their website (which is still up for some reason) is a “a hemostatic collagen with unique performance characteristics for surgery, trauma and burn wound management” (3). This sounds surprisingly similar to UEEC’s current flagship product the Hemostyp Hemostatic Gauze which is described in UEEC’s latest 10Q as a “collagen-like natural substance created from chemically treated cellulose”. Mr. Beplate left EMFP in 2006 and three years later EMFP changed its name to Nanomask, Inc. (4), which was later changed to NMI Health Inc. in 2013 which in turn has not filed a financial report in over 2 years (5) (6).

It thus seems that the current CEO and the Hemostyp’s technology have been around for over two decades, time during which neither has seen much success. This is more worrying when bearing in mind that the CEO sold 1,500,000 of common stock for a meagre $0.0752/share a couple of years ago. If little has changed in the last twenty years then it is certainly underwhelming to know that the CEO was willing to part ways with his shares for such price as recently as 2017 (7), as it could be an indication that the person at the helm is either forced to sell his shares in order to obtain some sort of remuneration or has little faith in his endeavours and the company’s future prospects.

Maybe, the current CEO and the company have turned a new leaf are now primed for success… but this assertion seems questionable in light that UEEC’s current business address is listed as 10624 S. Eastern Ave., Ste. A209, Henderson, Nevada. …which is a UPS mail box as a quick google search will show. How a business with a market valuation of over $400 million operates from a mailbox beggars’ belief.

Sadly, some of the company’s business associates are not much more reassuring than what has been mentioned so far. UEEC’s accountants are Haynie & Company, they received a far from glowing review from the Public Company Accounting Oversight Board (PCOAB) in 2017, which listed fraud risks as significant risks (8). Hopefully, this will have been resolved by now.

UEEC is puzzling to say the least. We let you be the judge.