Like all other tickers featured in our short reports, NEXCF has exhibited highly suspect behaviour recently. Over the last three weeks its share price has increased over 100% and its trading volume has been considerably above average. It didn’t take much digging around to unearth some major red flags such as: financial distress, paid promotion, over-reliance on share issuance and a board of directors that raises some worrying questions.

NEXCF describes its business activities as “the acquisition and development of augmented reality technology for purposes of generating revenue from multiple sources including a platform for omni channel solutions for augmented reality, eCommerce, analytics and advertising”. They claim to have acquired an exclusive license to a portfolio of patens and pending patents applications related to “interactive gaming, interactive advertising, and augmented reality (“AR”) technology” as well as “a portfolio of 400 published applications both in Apple’s app store as well as Google Play store” with the aim to “develop a new  3D  fully  immersive  advertising  platform  targeting  the cannabis industry”.

NEXCF’s financial information is not the most comprehensive as they are yet to file SEC financial reports, but what we have found in there OTC reports is not particularly encouraging. Between May 2018 and May 2019 cash in hand decreased by more than CA$1 million, assets decreased by nearly CA$3 million and liabilities increased by over CA$1.3 million. Furthermore, during this time period NEXCF generated nearly CA$600,000 in gross profits but ended up incurring losses greater than CA$4.6 million as their administrative expenses amounted to a whopping CA$5.3 million. Administrative expenses were largely comprised of consulting fees and employment costs (CA$1.6 million), share based payments (CA$750,000) and administrative fees and office costs (CA$690,000). Management does not dispute this as it acknowledges that the company’s ability to continue is “a going concern and is dependent upon the continued support of its shareholders”. Which should be particularly concerning when one bears into the consideration the fact that the CEO, CFO and President have been lately receiving an average of over $27,000 in monthly compensation each. Not to mention that the Company issued a convertible debenture of $125,000 to the wife of the CEO. There were also 2,500,000 share purchase warrants with an exercise price of $0.05 issued with respect to that debenture.

Yet another point of concern is that between the date it was listed as publicly traded company in the USA and August 31st 2019 NEXCF issued over 58 million shares, 14 million of which were the result of debenture and warrant conversions for an average price of CA$0.23, meaning that whoever got a hold of these shares stands to make significant profits if they were to be sold. It thus appears that the company is reliant on share issuance as a means of expanding and continuing its operations as well as servicing its debt obligations. 11 million of these shares were given to Future Farms Technologies Inc. (OTCQB: FFRMF) as a part of an arrangement agreement where NEXCF received FFRMF share in exchange (1). A quick look at FFRMF share price history will give reasons for concern. Between November 2017 and January 2018, FFRMF shares went from $0.17 to $1.66 and then all the way down to $0.56, they currently trade at $0.05. These type of price movements are highly suspect as they are eerily similar to those of a pump and dump.

A quick perusal of NEXCF’s website will reveal a rather worrying fact. In the testimonial section of NEXCF’s website two businesses are named, Mr. Steak and Vacuumcleanermarket.com. A look at Vacuumcleanermarket.com will reveal that their CEO is none other than the CEO of NEXCF, Evan Gappelberg, with a picture of the man himself. It also appears that Reuben Tozman, a NEXCF director, is also the COO of Vacuumcleanermarket.com (2). This finding brings into question the legitimacy of NEXCF’s client base and the trustworthiness of its management, as well as the profitability of NEXCF’s augmented reality business, as its most recent Management discussion and analysis OTC disclosure filing states that “NexTech acquired AR Ecommerce, LLC, on January 7, 2019, an online ecommerce vacuum cleaner business which has consistently generated earnings and cash flows for several years. 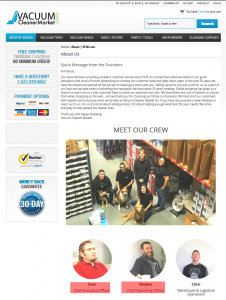 This is perhaps the biggest red flag NEXCF raises. On October 31st 2019, Zacks Small Cap Research released a report which states that “Based on EV to forecasted 2020 sales, we believe NexTech stock could be worth $1.60per share if it can achieve those revenues and contain dilution” (3). But this claim is highly questionable as the disclosures section at the end of the report states that “Each issuer has entered into an agreement with Zacks to provide continuous independent research for a period of no less than one year in consideration of quarterly payments totalling a maximum fee of $40,000 annually”. This finding brings into question the veracity of all of NEXCF recent features on the financial media. Legitimate companies do not need to pay for positive press releases or reports. 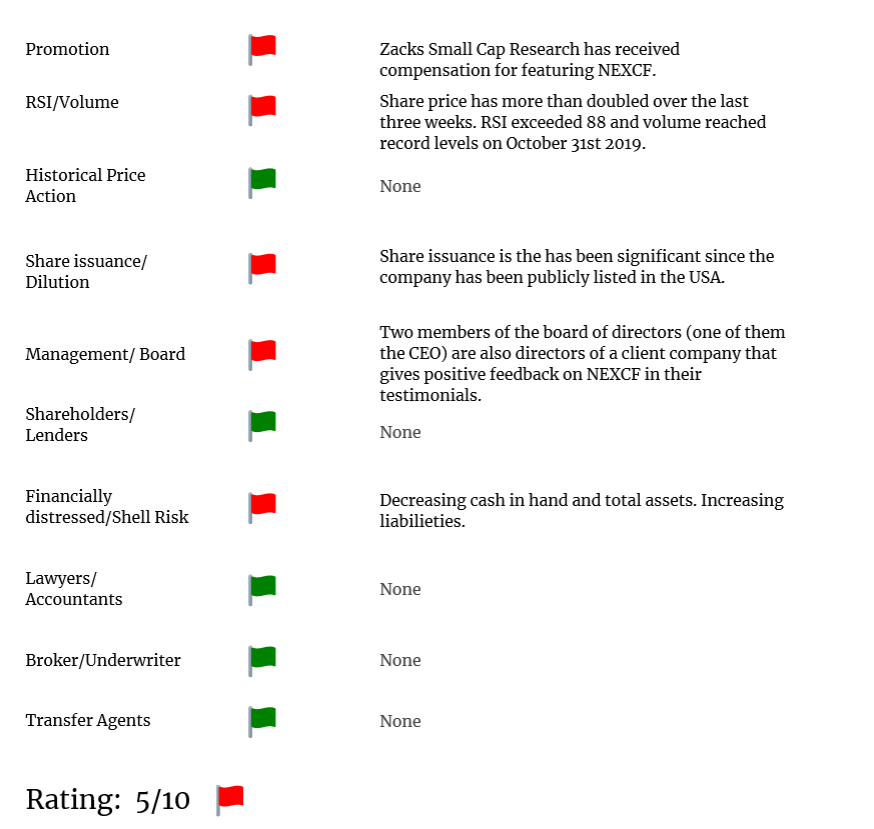 NEXCF raises a few red flags and these flags are big. A financially distressed company with dubious directors that is issuing shares left right and centre at a fraction of the current trading price in order to finance every single aspect of its operations as well as paying tens of thousands of dollars for the promotion of its shares.  We thus advise investors to stay away from NEXCF and believe that profits can be made on the short side provided the proper circumstances present themselves over the coming days.

Like Loading...
Previous articleGRN Holdings Corp. (Pink: GRNF) formerly (Pink: DCGD), One of the greatest pump and dumps of our time?