For this installment of third-party investor warnings we return to institutional investors. More specifically Iroquois Capital Management, a fund that has been subject to a fair amount of controversy in recent years due to the various legal ordeals it has faced as a result of its links to certain companies. We must emphasise that this article is in no way accusing Iroquois Capital Management of breaking any laws, regulations, duties or contractual obligations, we are simply highlighting how this fund finds itself repeatedly involved with publicly traded companies that exhibit unusual yet somewhat predictable price behaviour.

It appears that Iroquois prefers to maintain a low profile as we were unable to find its website. However, Iroquois’ co-founder, principal and managing partner, Richard K. Abbe, does have a personal website/blog where he offers investment advice and makes market predictions. As we will come to see Mr. Abbe’s investment advice should perhaps be taken with a grain of salt considering the share price performance of companies in which Iroquois has held a considerable stake over recent years.

In order to illustrate this, we will be taking a look at the publicly traded companies in which Iroquois has held over a 5% stake since 2016 and compare the closing price of the stock on the date that the first SC13G or SC13D was filed since 2016 to the price on August 10, 2020. But before presenting these figures, a closer look will be taken at three public companies that have recently exhibited so-called “dubious” price action and raise a few red flags with which Iroquois is currently involved with, namely XpresSpa Group Inc (NASDAQ: XSPA), Genius Brands International Inc (NASDAQ: GNUS) and Tonix Pharmaceuticals Holding Corp. (NASDAQ: TNXP). These case studies should offer some further context about the type of publicly traded companies Iroquois Capital Management  deals with. 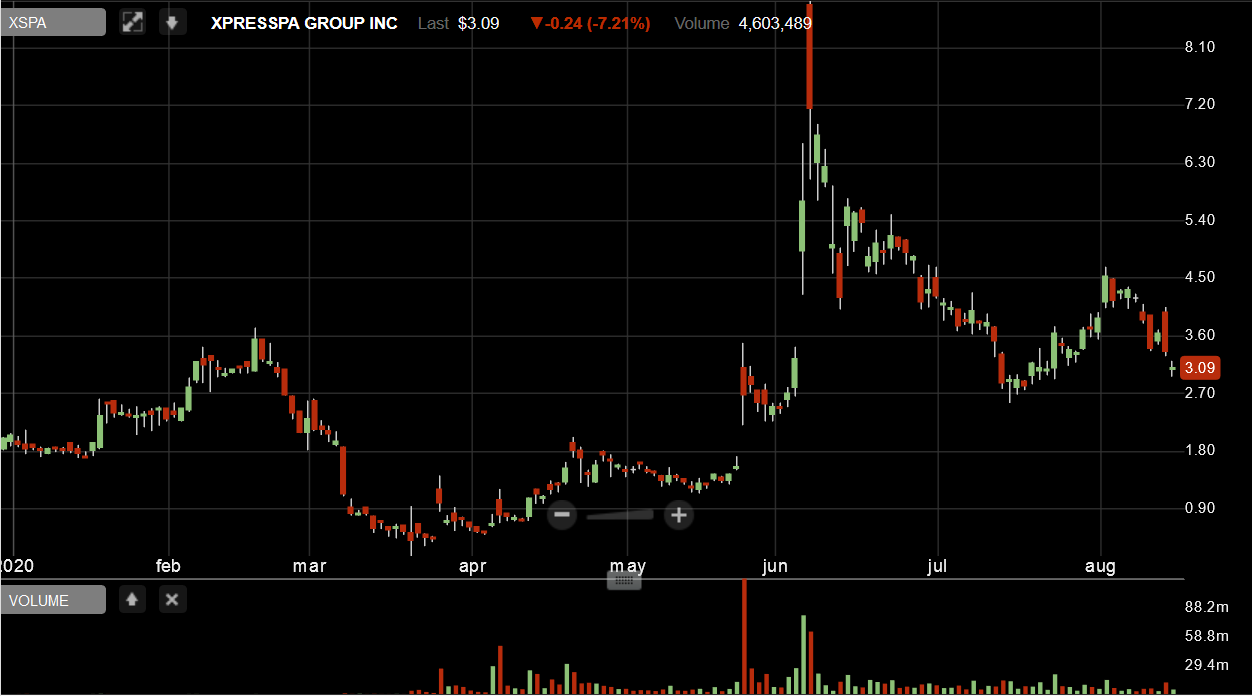 XpresSpa Group Inc. describes itself as “a leading airport retailer of spa services and related products”. It was created in late 2016 when XpresSpa Holdings LLC was acquired by Form Holding (a publicly traded company trading under the ticker FH) through a merger takeover.  Iroquois Capital Management, owned a considerable number of Form Holdings shares prior to the merger mostly as a result of a financing deal that allowed Iroquois to convert the debt into equity. Consequently Iroquois ended up acquiring a sizable stake in XSPA after the merger and Richard K. Abbe became a company board member. Similarly, Rockmore Capital President, Bruce T. Bernstein also became a XSPA director due to the fact that he was a Form Holdings creditor that also sat on the board of directors. 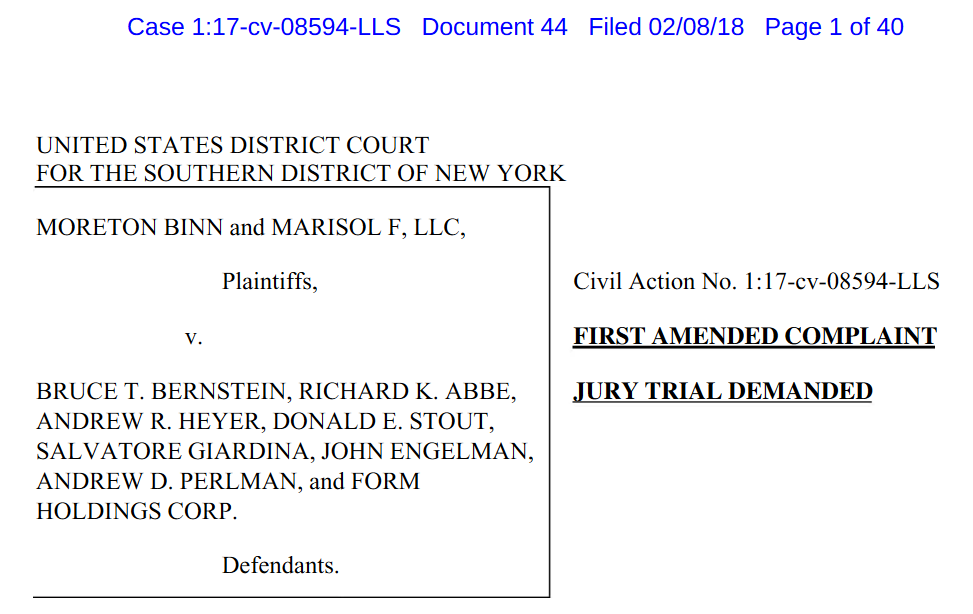 In November 2017, Moreton Binn and Marisol F. LLC, founders of the XpresSpa brand and XSPA minority shareholders filed a lawsuit against various members of XSPA’s board of directors, both Richard K. Abbe and Bruce T. Bernstein were named as defendants. The plaintiffs claimed that the defendants made misrepresentations about the nature of the merger between XpresSa Holdings LLC and Form Holdings, more specifically that Richard K. Abbe and Bruce T. Bernstein did not disclose an arrangement  “whereby they work as a group to take control over publicly traded companies for the purpose of using public markets for their self-interest” and that “the true nature of (the merger) was concealed from the plaintiffs when presented for the consideration and vote” and that this effectively allowed the defendants to secretly obtain a majority ownership of the company. For a more detailed account of the lawsuit please check out Teri Buhl’s article on the matter. 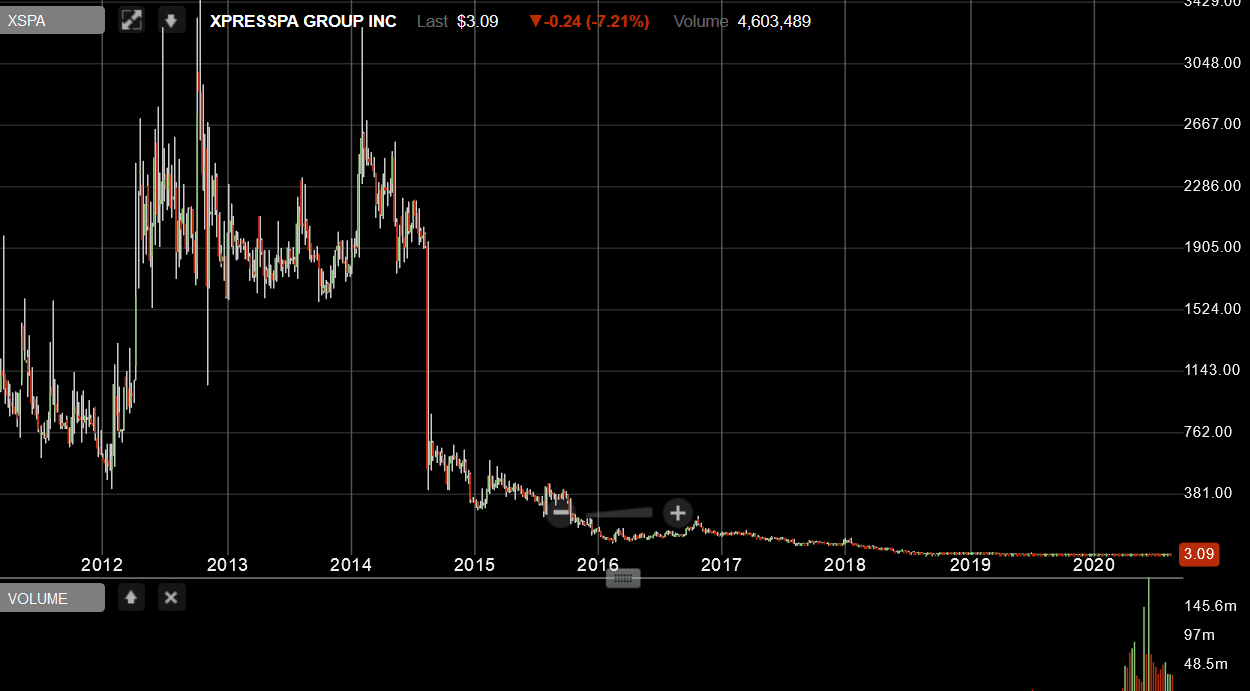 Despite a federal judge allowing the securities fraud case to go forward and Richard K. Abbe subsequently quitting the XSPA board of directors on December 18 2018, the case was ultimately dismissed on August 11, 2020. Nonetheless, it is worth pointing out that XSPA/FH’s share price has not performed particularly well since Iroquois Capital Management filed its first SC13G/D form with XSPA/FH, which took place in June 2011. Since then XSPA/FH’s share price has dropped from more than $740 to less than $4 on August 10, 2020 (please note that since June 2011, XSPA/FH has put in place three separate share reverse splits). XSPA historical share price has also been quite volatile, and over the last two years it has experienced significant short lived yet significant price increases that are promptly followed by significant price decreases.  Examples of such instances can be seen on October 24 2018, November 15 2018, January 9 2019, March 7 2019 and most recently and notably on June 26 2019 and on June 5 2020 (an instance we published a short call/trade alert about). 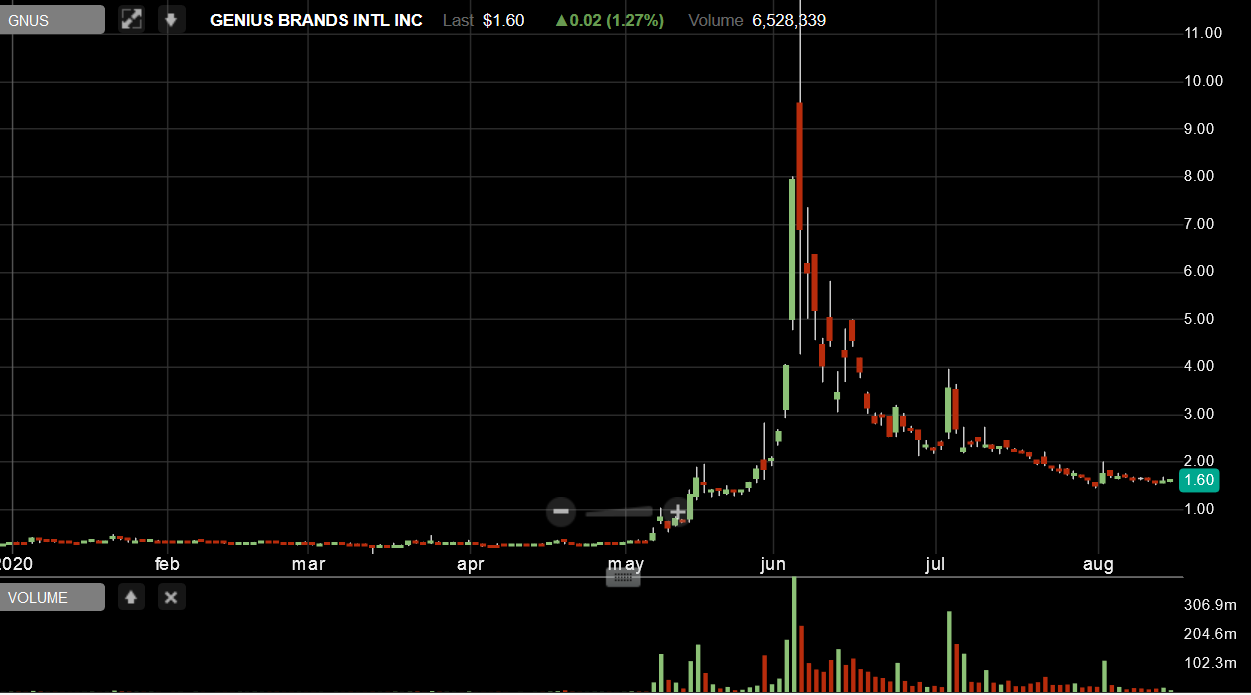 Genius Brands International Inc. is a children’s television production company that describes itself as “a global content and brand management company that creates and licenses multimedia content”. In early May 2020, the company put out a press release stating that it was merging its two existing TV channels into a single one, the Kartoon Channel, and that this new channel would be an “economic vaccine for Covid-19”. During this time, GNUS’s price started increasing rapidly, it rose from under $0.40 on May 5 2020 all the way to $11.73 on June 4 2020, while simultaneously experiencing unprecedented trading volume. Such drastic price increase was rather surprising, especially when one considers that throughout this period the company was taking advantage of the above average share price to sell millions shares at prices that ranged from $0.26 to $1.50 per share ( 1 , 2 , 3 , 4 , 5 ), which in turn greatly contributed to the increase in the number of outstanding shares from less than 29.6 million on March 31 2020 to more than 96 million currently. This was a clear indication that the company’s management valued the company’s shares at a fraction of the price that they were traded for during the price spike. This is further reinforced by the fact that the company had been diluting heavily over the previous months as well thanks to financing deals that it put in place. On March 11 2020, the company filed an 8-K form stating that it had raised $13.75 million through convertible debt and sold warrants to purchase 65,476,190 shares at an initial exercise price of $0.26 per share.

Iroquois Capital management is a long time GNUS investor/shareholder as evidenced by the fact that it appears to have first held over 5% of GNUS’ stock in May 2014. On June 26 2020, GNUS filed an S-3 form stating that it had registered for sale nearly 60 million shares at a proposed maximum offering price of $2.675 per share. These shares were not newly issued as they belonged/belong to several of the institutional investors that had previously acquired them. Iroquois registered nearly 6 million shares for sale and so did other investors such as Hudson Capital Management and CVI Investments. 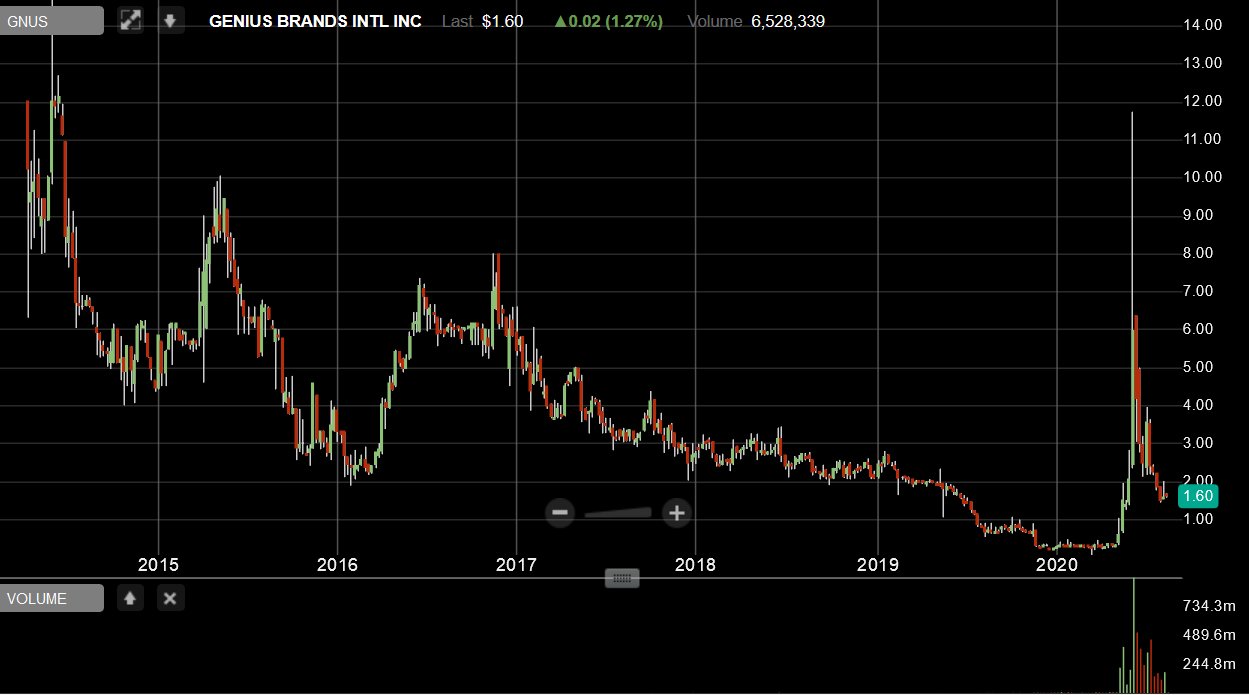 Iroquois financing of GNUS has thus been highly dilutive as the above indicates that it regularly sells large numbers of shares. This has coincided with a significant decrease in GNUS’s share price, having fallen from more than $11.00 in June 2014 (the month in which it filed its first SC13D/G with GNUS) to less than $2.00 at the present time. 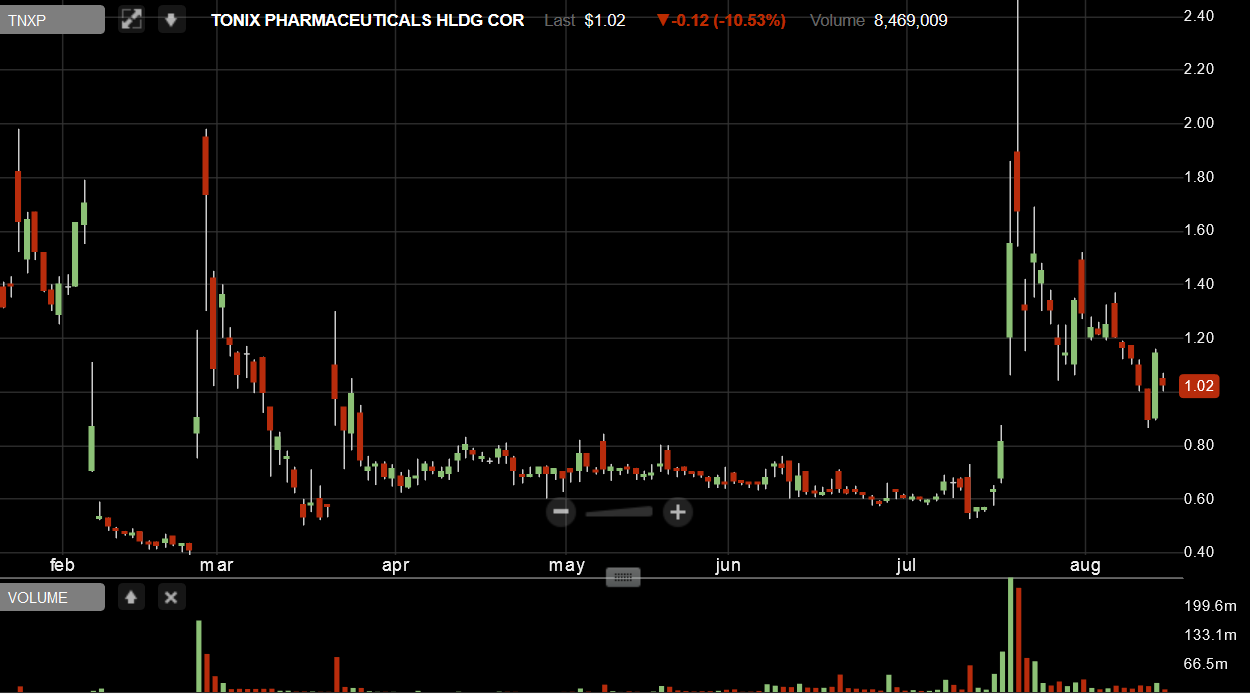 Tonix Pharmaceuticals is yet another publicly traded company in which Iroquois has held a sizable stake that has also happened to display highly unusual price action recently. Tonix Pharmaceuticals describes itself as a “clinical-stage biopharmaceutical company focused on discovering, licensing, acquiring and developing drugs and biologics to treat and prevent human disease and alleviate suffering”. Its current portfolio includes “biologics to prevent infectious diseases and small molecules and biologics to treat pain, psychiatric and addiction conditions”. Between July 17 and July 21 2020, TNXP’s share price appreciated considerably increasing from less than $1.00 to more than $2.40.

Curiously, as recently as June 12 2020, media/research outlets such as Zacks Small Cap Research had published reports about TNXP with disclaimers stating that it receives $40,000 from TNXP or someone related to the company  in exchange for the report. This is considered a red flag as it could be an indication that the company and/or associates are seeking to generate interest/demand for the company’s shares.

Furthermore, the company had been issuing a considerable number of shares in the months prior to the parabolic run, as the number of outstanding shares increased from little over 8.5 million on December 31 2019 to more than over 125 million shares by July 21 2020.

Another “interesting investor” TNXP has been involved with for a few years is Sabby Management. Sabby is another so-called “vulture fund” with an “impressive” track record when it comes to small caps, in addition it has settled with the SEC in the past for short selling rules violations. It appears that Sabby has been financing TNXP since early 2015 and according to the latest ownership form relating to TNXP, which was filed in mid February 2020, Sabby currently holds little over 1.2 million shares. These shares were acquired by Sabby around the same time the company announced the sale of millions of shares and warrants priced at around £0.57 each, meaning that if Sabby got hold of these shares and sold them around the time of the price spike, it likely made considerable profits.

From July 21 2020 onwards, TNXP’s share price proceeded to drop from more than $2.40 to less than around $1.00 currently. This should hardly come as a surprise given that the parabolic run in price had been preceded by “artificially” generated demand and heavy share issuance (dilution). 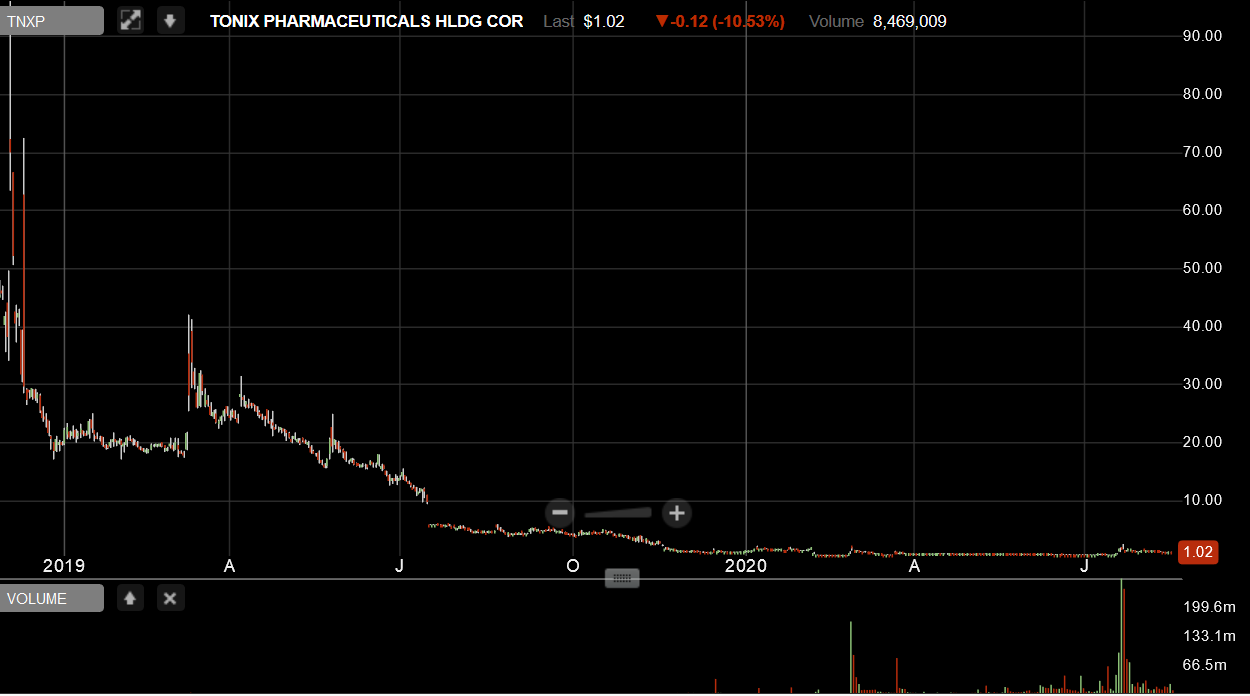 As usual we have put together an “index” for Iroquois Capital Management in order to illustrate that the vast majority of publicly traded companies in which Iroquois acquires a sizable stake, go on to experience considerable decreases in their share price. This has been done by taking the closing share price on the date of the earliest SC13G/Ds filed by Iroquois Capital Management since the beginning of 2016, and comparing it to the corresponding closing share price on August 10 2020. 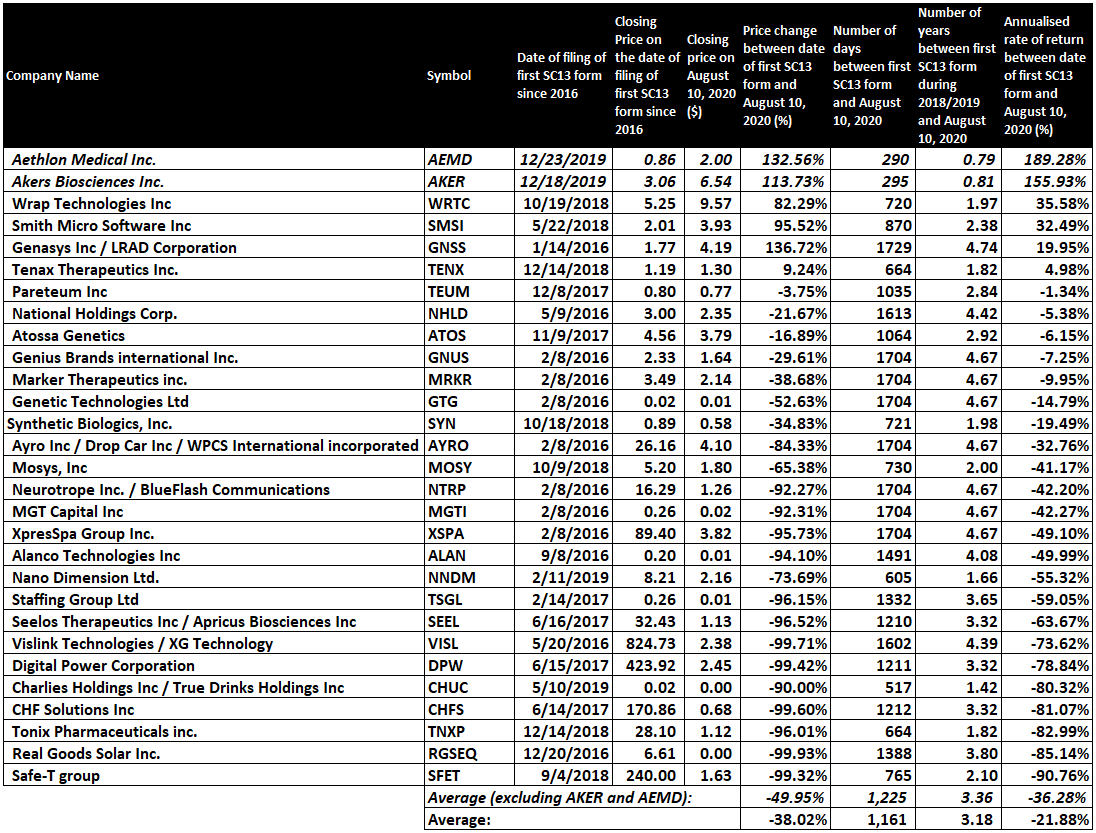 The average annualised rate of return of all the tickers is -21.88% and the average change in price is -38.02%. It is worth noting that if AKER and AEMD are excluded from the calculations the above averages drop to -36.28% and -49.95% respectively. We believe it is worthwhile excluding AKER and AEMD from the calculations as they are statistical outliers when compared to the other tickers. This is likely due to the fact that Iroquois filed its first SC13G/D relatively recently (December 2019) with them and both of these tickers have experienced notable parabolic runs this year (AEMD on June 18 2020 and AKER on April 6-7 2020), resulting in the long term downward trend in their share price being bucked. Coincidentally, AKER has also been involved with other funds with underwhelming track records such as Hudson Bay Capital Management and raises other red flags as pointed out in our short report published on April 7 2020. And AEMD appears to have a long history of dilutive financing as indicated by the long term involvement of Lincoln Park Capital, a prolific so-called “vulture fund” as evidenced in our report on it.

It thus appears that the vast majority of publicly traded companies in which Iroquois acquires a significant stake go on to experience significant decreases in their share price.

Given the information presented above, we advise investors and to “tread carefully” when dealing with related tickers. Experienced  small/micro/nano cap traders should take note of these them as short selling opportunities are likely to arise, while beginners should avoid them or treat them with extreme caution.

We also welcome our readers who have invested in or traded the above listed companies to please come forward and share their experiences. This will prove very valuable as a warning to current and prospective investors/traders about the perils of getting involved with companies that have links to CVI Investments.