Over the last couple of months American Lithium Corp.’s stock (OTCQB: LIACF) has enjoyed over an eight fold increase in its price and daily record trading volumes were set last week on Wednesday, Thursday and Friday. Given this somewhat common (in this day and age of “unorthodox” quantitative easing) market activity we decided to take a closer look at LIACF and unsurprisingly we found enough red flags to warrant putting out a short report. These red flags include: poor financials,  paid promotion, severe dilution, an abundance of recently issued cheap shares and warrants.

American Lithium Corp. is a Canadian entity, incorporated in the Province of British Columbia. The company describes its activities as the “identification, acquisition and exploration of mineral interests”, however, as of the date of its latest consolidated financial statements, the company has “not identified a known body of commercial grade minerals on any of its properties”. Consequently, “the continuing operations of the Company are dependent upon its ability to continue to raise adequate financing and to commence profitable operations in the future and repay its liabilities arising from normal business operations as they become due”. So what we have here is a Canadian mining company with little to no prospects that is reliant and financing to stay afloat and pay its financial obligations, and that as we shall see has been subject to paid promotion. If one has followed OTC stocks for a while, one ought to be somewhat sceptical about American Lithium Corp. from the get go.

The company’s financials, put mildly, leave a lot to be desired. In the quarter ending on February 29 2020, the company had CAD$804,628 in cash, while averaging a quarterly net loss of CAD$3,117,238  for the financial year ending on the same date. This should make it very evident that the company was not lying when it stated that it is dependent on fund raising to remain afloat, which makes the recent price run awfully convenient from that standpoint. It should thus come as no surprise that the company has been printing an awful lot of shares over the last couple of years. As of June 24, 2020, the number of LIACF outstanding shares stood at more than 92 million, which is a significant increase given this number stood at around 66 million on February 2020, 50 million on February 2019 and 13 million on February 2018. These levels of dilution are extreme and should make it clear to most shareholders that management is not particularly concerned about existing shareholder value.

It thus appears that while the company has a very hard time generating revenue, it has little trouble raising enough capital through equity sales to keep itself afloat despite significant quarterly losses over the last year or so, which makes the current paid promotion so-called “dubious” to say the least. Especially when one bears in mind the low prices at which most of these shares were issued, as this report later shows.

American Lithium Corp. is no stranger to paid promotion as evidenced by its profile on OTCmarkets.com which is flagged for promotion and the fact that this has been going on for 51 days as of July 9, 2020, which is quite the coincidence when one considers that LIACF’s share price has increased by more than five-fold since early May 2020. What is even more concerning is that the company is being promoted through one of the most explicit forms of paid promotion, a landing page. This landing page is found on thetradinglettter.com, a website run by J. Daryl Thompson a “self proclaimed stock trading addict” who “eats, lives and breathes trading stocks”….and who is more than happy to “exaggerate” LIACF’s prospects in exchange for the sum of USD$65,000. 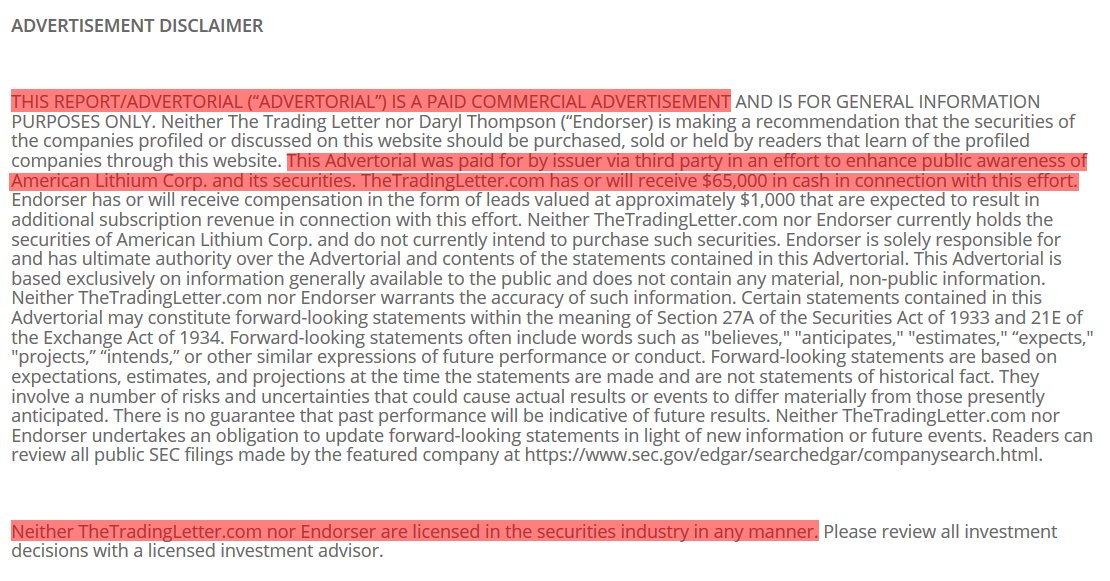 It should be evident that someone is willing to compensate Mr. Thompson for promoting LIACF’s shares to investors. It would not be unreasonable to assume that whoever this is has acquired the shares relatively recently, which in turn should make one wonder at what price said shares could have been acquired for. We now thus turn to the company’s recent financing methods.

Cheap shares, options and warrants… loads of them:

According to LIACF’s latest financial statements, share issuing during the 12 months preceding February 28, 2020 is as follows: 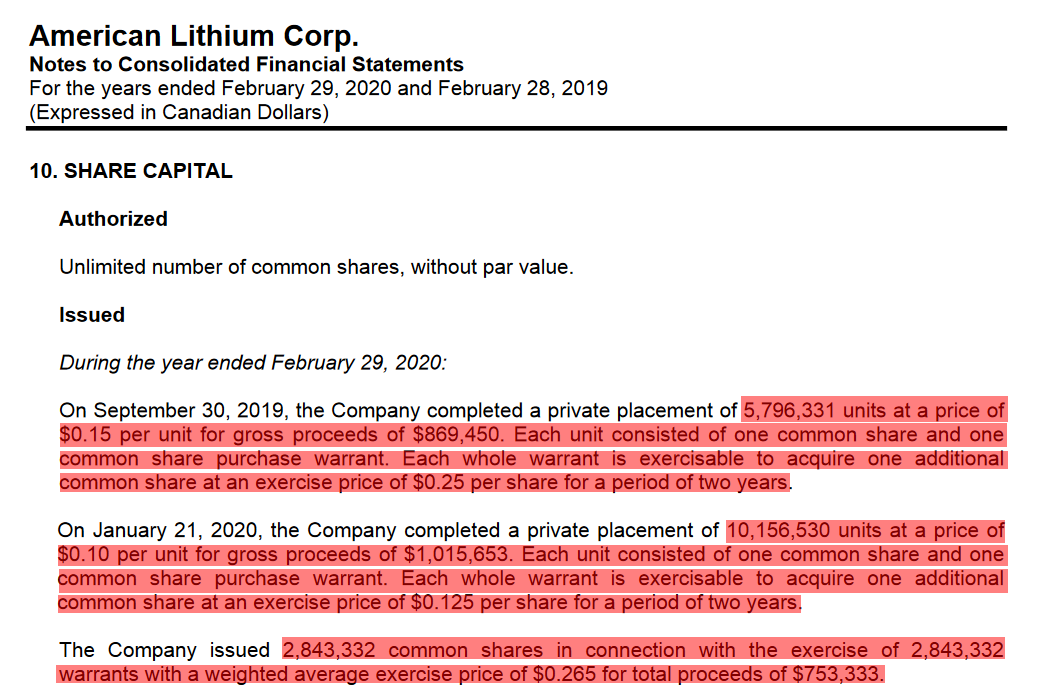 It is clear that the company has issued over 18 million shares, some of them for as low as CAD$0.10 per share.

Investors are not the only ones who stand to make considerable profits if they decide to exercise warrants and sell shares. The same applies to management as evidenced by the fact that  as of February 29, 2020, there were a total of 6.8 million options outstanding and exercisable, with an average exercise price of CAD$0.30.

It is worth noting that during the 12 months preceding February 2020, the COO, interim CEO and Director Michael Kobler divested CAD$367,000 at an average price of CAD$0.24, which he reduced his holding by 89%. It thus appears that a key member of management was not very optimistic about the company’s prospects not too long ago. 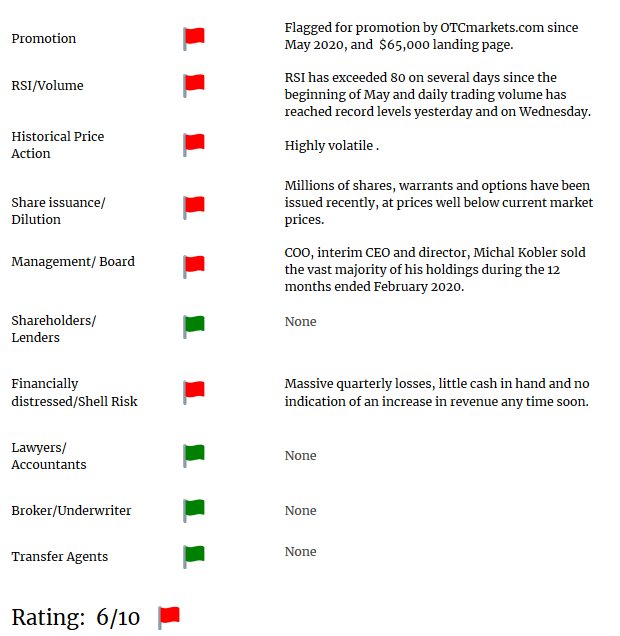 LIACF is a poor investment. It is a long time struggling mining company that “has not identified a known body of commercial grade minerals on any of its properties”, meaning that things are unlikely to change any time soon. This seems to be reinforced by the fact that a key member of management was willing to divest the vast majority of his holding during 2019. But what is most concerning are the highly dilutive manner in which the company goes about securing funding as it has issued millions of cheap shares and warrants recently, and the fact that this period of extreme and “cheap” dilution has been followed by a notable price run that has coincided with paid share promotion. This  could be an indication that someone wishes to sell shares, shares that have been very cheaply acquired when compared to the current market price. Stay away from LIACF unless you are an experienced trader.