Alpha Capital Anstalt has earned a reputation as one of the world’s most prolific and ruthless investors in cash-starved small-cap companies. Its stock-in-trade are bridge loans and private investments in public equity (PIPE) on terms that are highly unfavorable to desperate issuers. Its favorite instruments are convertible promissory notes, convertible preferred shares, and warrants with anti-dilution provisions and registration rights. As long as issuers remain solvent and honor their agreements, Alpha’s investments typically generate handsome returns for the firm while diluting previous investors, increasing a stock’s float, and putting downward pressure on a stock’s price.

Alpha is similarly active in the court system. The firm regularly sues small companies that fail to repay loans or issue shares on demand. Since 2007, Alpha has been a plaintiff or appellant in 51 cases in U.S. District Court, 13 cases in U.S. Bankruptcy Court, and 19 cases in New York Supreme Court. In 2018, the firm was one of 20 defendants that the U.S. Securities and Exchange Commission sued in SEC vs. Honig et al for allegedly participating in a five-year pump-and-dump scheme that generated over $27 million in profits. Without admitting or denying the allegations, Alpha consented to a permanent injunction and paid $908,259 in disgorgement, interest, and penalties.

This article is in no way accusing Alpha of violating any laws, regulations, duties, or contractual obligations (excluding matters that have been settled with the SEC). We are simply highlighting how this firm finds itself repeatedly involved with publicly traded companies that exhibit highly unusual yet somewhat predictable share price behavior.

Little is publicly known about the inner workings of Alpha, which is headquartered Liechtenstein, which is considered (whether fairly or unfairly) by many to be a secretive tax haven. According to a 19-year-old SEC filing, Alpha was owned in 2002 by an Austrian bank named Bank fur Arbeit und Wirtschaft AG (BAWAG) and a private family trust named Leguas Stiftung. BAWAG made headlines in 2005 for its role in the collapse of Refco, a commodities broker in New York whose chairman and CEO allegedly hid $430 million in bad debts from the firm’s auditor and investors. Concurrent with the Refco scandal, BAWAG merged with the Österreichische Postsparkasse (P.S.K.) to form the Bank für Arbeit und Wirtschaft und Österreichische Postsparkasse AG, or BAWAG P.S.K.

Leguas Stiftung is the family trust of Martin Schlaff, a billionaire Austrian businessman and one of BAWAG’s wealthiest customers. According to a report published in Haaretz, Schlaff obtained his fortune before the fall of the USSR through connections with the East German government and its secret police force, the Stasi. From 2000 to 2010, a business partner of Schlaff named Solomon Obstfeld ran a firm in New York named LH Financial Services, Inc., which managed Alpha’s investments in the U.S. and continues to manage them currently. In June 2010, Obstfeld was found dead in “an apparent suicide or murder” after a dispute over control of a Brooklyn condo project.

To demonstrate the effects of Alpha’s investments, we will examine the publicly traded companies in which Alpha has held an interest greater than 5.00% since 2011. We will compare the closing price of each stock on February 12, 2021 with the closing price on the date that Alpha first reported its position in each stock on SEC Forms SC 13G or SC 13D. But first, we will look closely at two companies, Oblong, Inc. (NYSE: OBLG) and Cancer Genetics, Inc. (NASDAQ: CGIX), whose stock prices exhibited questionable increases after each company received recent investments from Alpha. Then we’ll look at Safe-T Group Ltd. (NASDAQ: SFET), whose ADS price has plummeted since it received an investment from Alpha in 2018. By comparing these companies, we’ll see how the dilutive effects of Alpha’s investments play out over time. 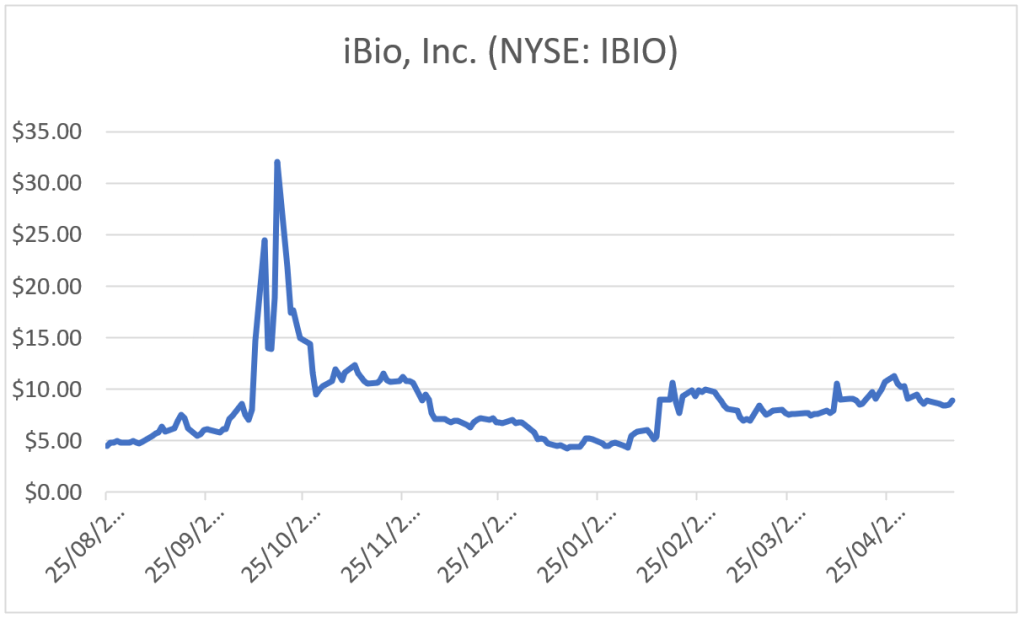 Oblong, Inc. is based in Denver, CO and makes online collaboration software that enables remote work. The company was formed as a privately held Delaware corporation in 2006 and went public in Oct. 2019 through a reverse merger with a shell corporation listed on the Nasdaq.

In October and December 2020, Oblong completed private placements that generated proceeds of $2,973,000 and $5,000,000, respectively. The company sold discounted common shares and two-year warrants exercisable at $4.08 per share and $5.49 per share, respectively, in each offering. After Oblong registered the shares sold in the offerings (including shares underlying warrants), the company’s total common shares outstanding increased by 44%, diluting the holdings of previous shareholders. Alpha owned 870,000 of the common shares that were registered after the offerings (including shares underlying warrants), which represented 9.8% of Oblong’s total common shares outstanding.

As of January 21, 2021, Alpha still owned 386,939 common shares of Oblong, or 4.99% of the company’s total common shares outstanding, which did not include shares underlying warrants that Alpha had not yet exercised. After Oblong completed the December 2020 offering, its stock price fell as much as 34% before recovering slightly. The price could continue to decline as shareholders exercise in-the-money warrants and sell shares.

In addition, Oblong’s capitalization table contains a potential ticking time bomb in the form of convertible preferred stock. As of December 31, 2020, the company had issued three separate series of preferred stock, which threaten to further dilute common stockholders upon conversion (see Table 1). 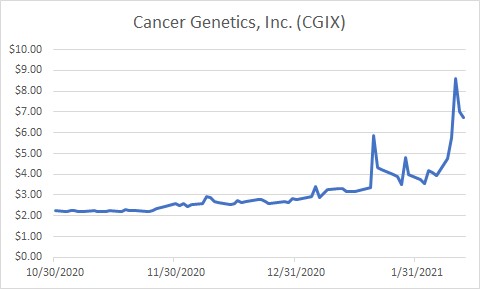 Cancer Genetics, Inc. is a shadow of its former self. Until July 2019, the company developed and sold oncology testing products. After going public at $10 per share in 2013, its stock price nearly doubled before falling below the IPO price in 2014. In 2016, the company completed two private placements. Alpha participated in the financings and bought five-year warrants exercisable at $2.25 per common share.

But Cancer Genetics took on extensive leverage, incurred significant expenses, and made multiple acquisitions until it had to liquidate nearly all its assets in 2019 and execute a 1-for-30 reverse stock split to maintain its Nasdaq listing. Currently, the company’s only remaining business is an Australian subsidiary named vivoPharm Pty. Ltd., which provides contract research services for drug discovery and development programs.

To salvage some value for its shareholders, Cancer Genetics announced in August 2020 that it planned to execute a reverse merger with StemoniX, Inc., which is a privately held company in Minnesota that develops human organ cells for use in drug safety studies. Cancer Genetics’ shareholders will retain 22% ownership of the post-merger entity, severely diluting their holdings. If Cancer Genetics’ net cash balance falls below $1,750,000 within 10 days before the merger closes, the shareholders’ ownership percentage could decrease to less than 22% in proportion to the shortfall. As a condition of the merger, StemoniX agreed to raise $10,000,000 in a private placement before the merger is consummated, which will cause additional dilution.

As of September 30, 2020, Cancer Genetics had $1,133,000 in cash and a quarterly burn rate of $1,032,333. The company had to raise capital to fund its operations until the merger closed. Moreover, the cash position of the post-merger entity is not likely to improve. StemoniX has a history of losses and is expected to have approximately $500,000 in cash immediately before the merger. Therefore, the post-merger entity will have to raise capital through dilutive stock offerings, debt, or licensing arrangements.

On October 28, 2020, Cancer Genetics sold 1,363,637 shares of common stock at $2.20 per share in a public offering. Alpha bought 227,272 common shares, or 5.87% of the company’s total common shares outstanding. The stock closed at $3.40 per share on the day of the offering. The following day, the price fell 38% on volume that was 10.7 times the 30-day average before closing at $2.28 per share. By the end of December, Alpha’s remaining position in Cancer Genetics consisted of only 85 common shares. The firm had dumped 227,187 shares within two months, during which Cancer Genetics’ stock price had never closed higher than $2.95 per share.

Alpha has not publicly disclosed any additional investment in Cancer Genetics since the October 2020 offering. But Cancer Genetics has continued to sell stock. On February 1, 2021, the company completed a private placement in which it sold 2,758,624 shares of common stock and five-year warrants to purchase an additional 2,758,624 shares of common stock at $3.50 per share. Gross proceeds from the placement were approximately $10,000,000. On the following day, the company registered the shares and warrant shares for resale. Among the selling shareholders were some familiar names from the world of toxic lending and investing, including Intracoastal Capital, LLC and CVI Investments, Inc.

In addition, StemoniX sold preferred stock in a private placement for $2,000,000 on January 28, 2021. As a condition of the merger, the company is obligated to sell even more preferred stock, which will be converted into Cancer Genetics common stock at the closing of the merger and will dilute the holdings of historical shareholders of Cancer Genetics and StemoniX proportionately.

Several Cancer Genetics shareholders are unhappy at the prospect of their ownership percentage decreasing by 78%. As of February 12, 2021, they had filed at least eight lawsuits in U.S. District Court alleging that the company omitted material information from the registration statement it filed on October 16, 2020 in relation to the merger. Specifically, the shareholders claim that the registration statement fails to disclose the terms and valuations that other potential merger candidates proposed to Cancer Genetics during the process that led to the merger agreement with StemoniX. The cases are currently pending and may be consolidated. 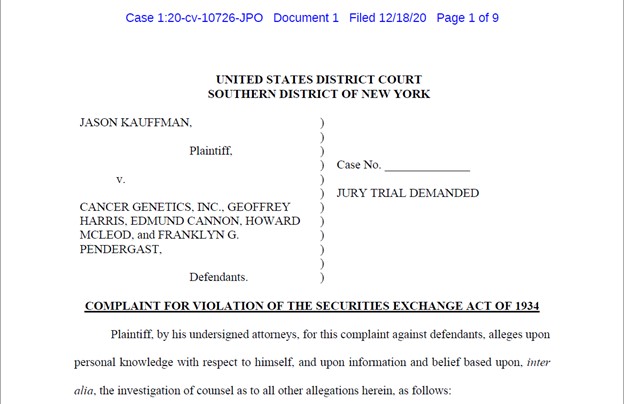 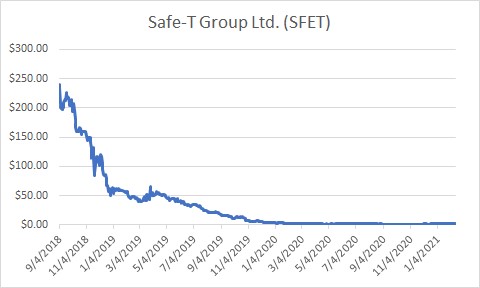 Safe-T Group Ltd. is an Israeli company that develops data security software. It went public in January 2016 through a reverse merger with a shell corporation listed on the Tel Aviv Stock Exchange. In August 2018, the company completed an offering of American Depositary Shares and warrants, and its ADSs began trading on the Nasdaq. Five months before the offering, Safe-T Group had just $1,609,000 in cash and an annual burn rate of approximately $5,559,000. In 2017, the company had lost $5,313,000 on revenues of $1,096,000. Its auditor had expressed doubt about its ability to continue as a going concern.

After the August 2018 offering, Alpha owned 8.43% of Safe-T Group’s outstanding ordinary shares and 4.99% of its ADSs, each of which represented 40 ordinary shares. In addition, Alpha owned warrants to purchase 441,760 additional ADSs. In total, Alpha had acquired approximately 23.7% of the securities issued in the August 2018 offering. Because the securities had come with registration rights and no lock-up provisions, Alpha was free to begin selling the shares and ADSs and exercising the warrants after the offering.

To provide a comprehensive view of Alpha’s investments over time, we calculated the annualized rate of return on all investments the firm has made since 2007. We included stocks that have fallen to zero to avoid survivorship bias. To be clear, these calculations are not intended to represent Alpha’s actual returns. We don’t know exactly when the firm exited its investments or whether it did so profitably. Rather, these calculations show what tends to happen over the long term to stocks in which Alpha invests. 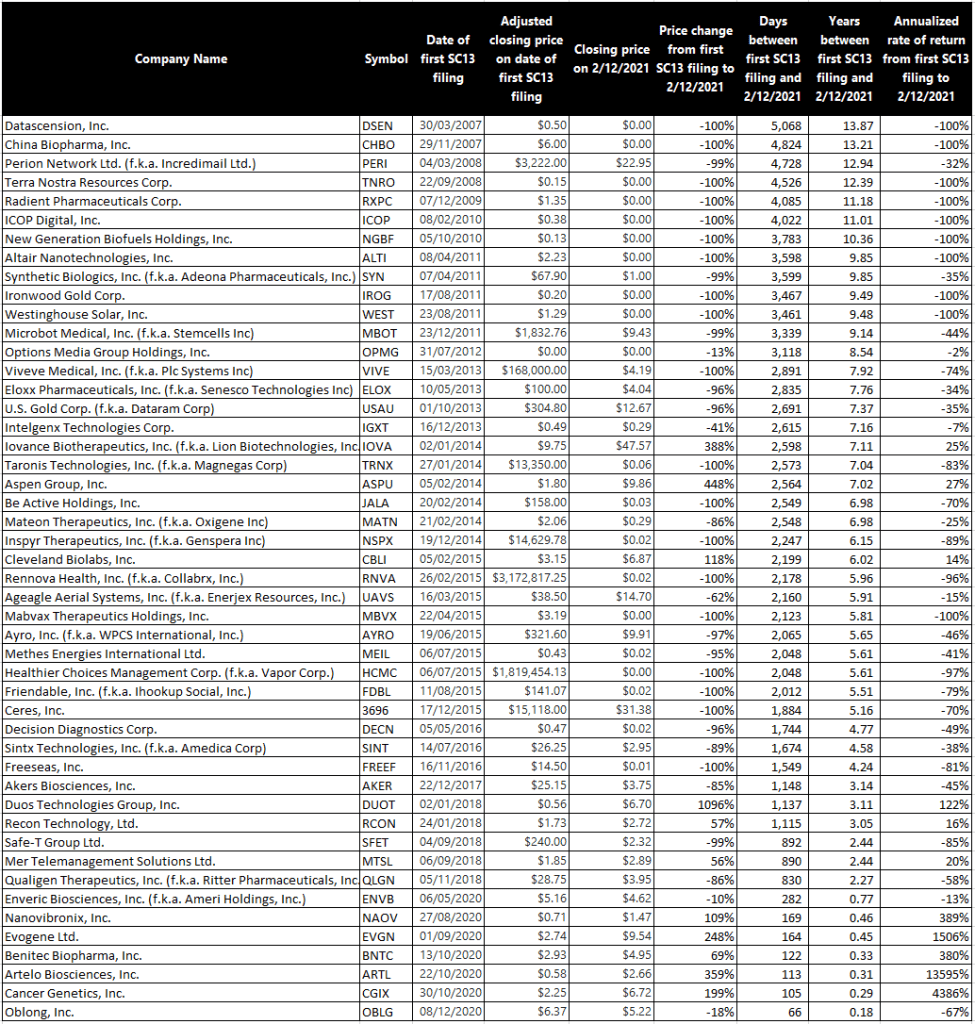 At first glance, the 348% average annualized rate of return over the 14-year period looks impressive. But on closer inspection, the average is inflated by large outliers that are less than a year old. In particular, the 13,595% annualized rate of return on Artelo Biosciences, Inc. (NASDAQ: ARTL) is anomalous. Alpha’s investments often increase in the first year before the firm and its co-investors convert debt, exercise warrants, and flood the market with shares.

Companies that raise capital by selling dilutive instruments often enter a multi-year death spiral. With the spectre of unexercised warrants and unconverted debt hanging over them, it’s hard for them to attract interest in public offerings. When they inevitably need more capital, they must return to the same toxic lenders and investors and sell more dilutive instruments on even less favorable terms than before. Over several years, a company’s balance sheet and stock price can deteriorate beyond the point of no return. Several such companies appear on our list of Alpha’s investments.

We advise investors to exercise caution if they see that Alpha has invested in a company they are researching. Look carefully for outstanding warrants, convertible promissory notes, convertible debentures, and convertible preferred stock, all of which could quickly expand a company’s float, dilute investors’ holdings, and depress the company’s stock price. If you have traded or invested in securities owned by Alpha, please share your experience with us and your fellow investors.