A water company which claims to possess a novel wastewater treatment technology. Its price saw more than a two-fold increase during the first two weeks of July. Unsurprisingly, it has been promoted and even has a landing page (1). 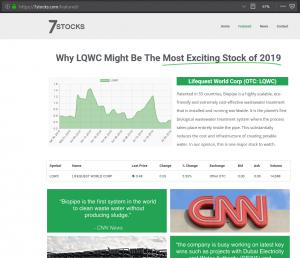 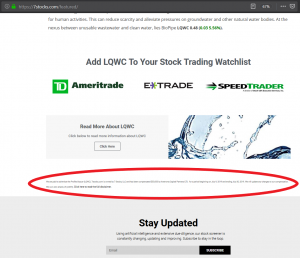 Said landing page was paid for by Antevorta Capital Partners for the sum of $50,000. Antevorta also happen to hold 2 million shares (2) … and they also hold/held shares in Vaccex Inc. (VCEX) and paid for its landing page. Unsurprisingly, both LQWC and VCEX have been given caveat emptor warnings by otcmarkets.com.

Finally, Matheau Stout, an attorney so infamous he is listed on otcmarkets.com’s list of prohibited service providers (3).