Discovery Gold Corp. (DCGD) has been quite the roller-coaster over the last couple of months as shown by its share price volatility. This comes as no surprise given the strong contrasts that exists between the statements made by the new owners/management and recent filings as well as the findings of Utopia Capital and other researchers.

According to GRN Holdings (the new owners/management) they are a multi million-dollar cannabis business that intends to expand its operations by reverse merging into DCGD. Some attempts at said merger have taken place as exemplified by Discovery Gold Corp. name change to GRN Holdings Corp. However, there is no other evidence that would indicate that a merger is on its way. DCGD’s symbol has not changed and a quick look at the latest 10-Q reveals that nothing of value has been transferred into DCGD as assets and revenue remain at zero (1). Given these facts it is surprising that DCGD is currently trading above one dollar per share.

It appears that the current price share is thus entirely predicated on the belief that GRN Holdings is a growing and successful business that genuinely intends to carry out said reverse merger. We believe that GRN Holdings does not warrant such level of good faith concerning their public statements for a few reasons. These have been discussed in parts 1 and 2 of our DCGD research. And now we have some additional findings that further reinforce our scepticism.

Our findings concern the CEO, Justin Costello. DCGD’s 8-K filing from June 25th 2019 clearly states that Mr. Costello is a Harvard Business School (HBS) graduate (2). This statement was shown to be false by an article published on SeekingAlpha by White Diamond Research who contacted HBS and obtained confirmation that Mr. Costello has never attended this institution (3). Shortly afterwards on August 16th, Mr. Costello published a letter on the GRN Holdings website stating that he indeed did not attend HBS and that such information did not originate from him (4), which is clearly not true as this information was submitted by GRN itself as demonstrated by the 8-K filing.

Moreover on the very same day a cease and desist letter directed at SeekingAlpha was published on GRN Funds’ twitter accusing them of defamatory statements (5) despite Mr. Costello acknowledging that he had indeed never attended HBS. This is worrying as it clearly shows that Mr. Costello is willing to be dishonest about his credentials on an SEC filing, is willing to cover up his previous false statements with even more lies and is also willing to threaten legal action however baseless and contradictory it may be. 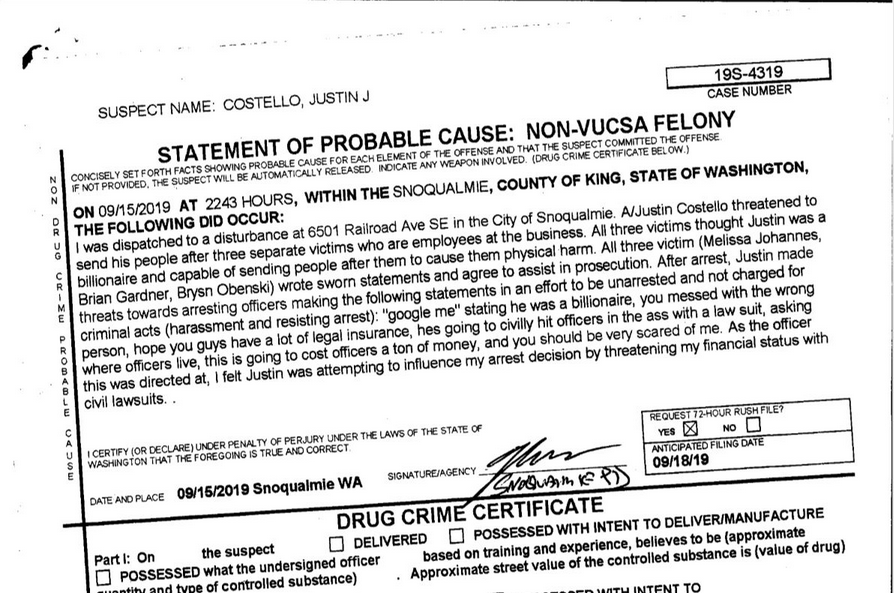 But this is not the most concerning fact about Mr. Costello. On September 15th 2019, Mr. Costello threatened to “send his people” after three separate employees of Salish lodge & spa. As a result of this incident, he was arrested by local authorities after which he proceeded to threaten and harass the officers in charge of his arrest (6). Although the case has already been closed, this type of behaviour should hardly be expected from a person at the helm of a multimillion-dollar business. Especially when it is clear this was not an isolated incident as Mr. Costello is named as a defendant in four other Washington courts cases over the last 5 years (7).

One more thing that should be noted is that in 2017 Mr. Costello was trying to a group of twelve cannabis businesses  for the sum of $60-$70 million(8), and it seems that there were no takers as no news have been ever published about the sale (8). This makes one wonder how much has changed over the couple of years. 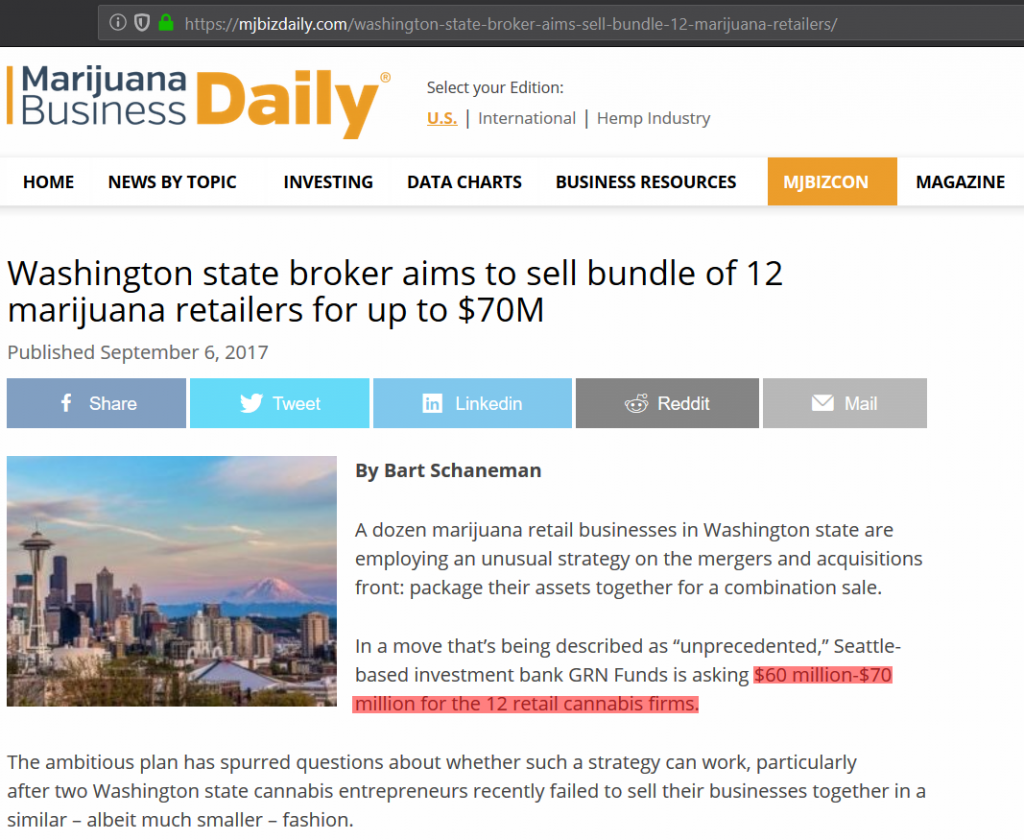 It is our opinion that the aim of Mr. Costello and other GRN Funds associates with this reverse takeover shell game is to make extraordinary and baseless promises and claims in an attempt to keep DCGD’s share price artificially inflated until restricted shares become unrestricted. If this is the case then we have reason to believe DCGD share price would see a decline greater than 90%. GRN Funds obtained 139 million shares for the sum $300,000 on June 25th this year, meaning that if the current share price of around $1 is maintained until said shares become unrestricted, GRN Funds stands to make a profit of almost $139 million. A sum of money that current and future long shareholders would be paying for.